Rogue Purge is the second of our two new Core Space expansions, and is available to pre-order from today for delivery in just four weeks. Read on to find out more, and if you missed them make sure you check out our previous posts on Shift Change at MegaCorps and the Dangerous Days book. 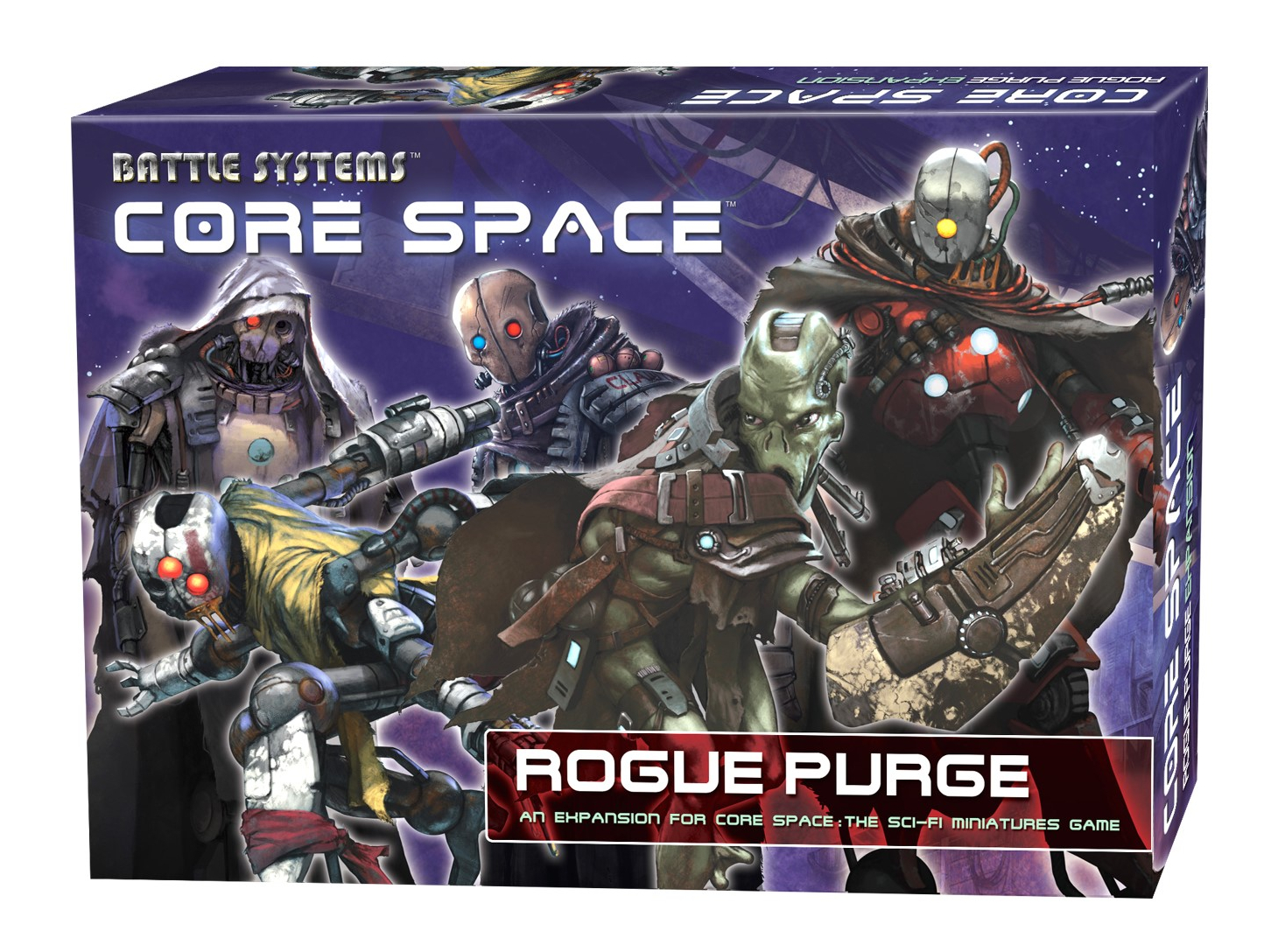 What happens when the Purge disconnect from their masters? Resisting their conditioning and trying to blend in as humans, the new Rogue Purge NPCs may not be hostile at first but the time will come when they know too much! They can also be fielded as a Trader crew, with a unique new ability to craft their own equipment from its component parts, presenting many new decisions about what to grab on a salvage run.

Like all Core Space expansions, not only can you use these new rules and minis in the missions in the box, but they can be integrated into your regular games too. You can add them to standalone missions, to the Perseus Arm campaign in the rulebook, or to your own custom scenarios.

Disguised (badly) as Civilians, the Rogue Purge can hide in plain sight. They are not directly hostile to your Traders, instead lurking in the shadows and learning about your ways. They gain experience throughout the game from watching Traders, dismantling equipment, or from attacking – just to see what happens. Once they have learned enough they will leave.

Of course, letting the Purge have this knowledge is incredibly dangerous, so their departure raises the hostility. On the other hand, obtaining the AI chip from a construct like that would be priceless to the right buyer. The balancing act is to let them gain enough experience to make them valuable, without letting them leave…

Let’s find out what else you get inside:

There are five new Rogue Purge miniatures; every one of them a unique sculpt. Unlike previous expansions these minis are in highly-detailed resin. This does mean they’ll need some assembly with superglue, but they are some of the best minis we’ve made! We’ll have photos of the resins to show off very soon. 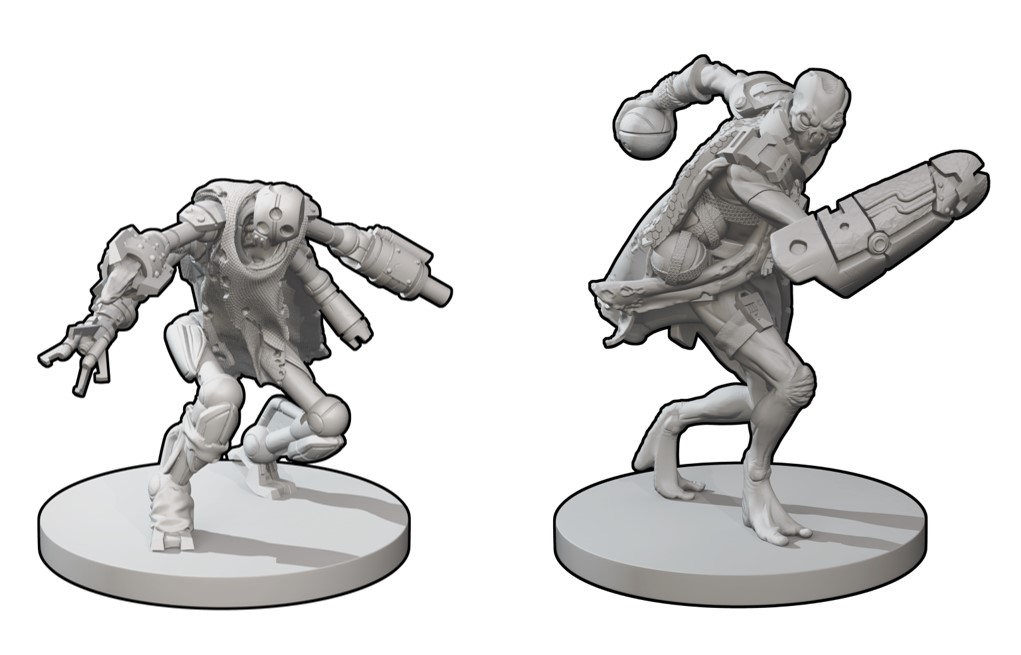 Rogue Assassin and Live One

It turned and headed back into the wreckage, searching for any of its kin whose parts could be salvaged. Despite it being the best course of action, chances of salvage decreased by the second. They were designed to purge immediately after being rendered disabled…purge…This is what they called it, and its kind. The Purge. It’s newly isolated conscious began to ponder the meaning of this term, but quickly dismissed the notion. It was starting to adapt to this new…detached…way of processing. The first of its kind it stumbled across was too far gone, reduced to its basic polymers, but the engagement had been fierce, and there were many more units to inspect.

An excerpt from the Rogue Thoughts short story 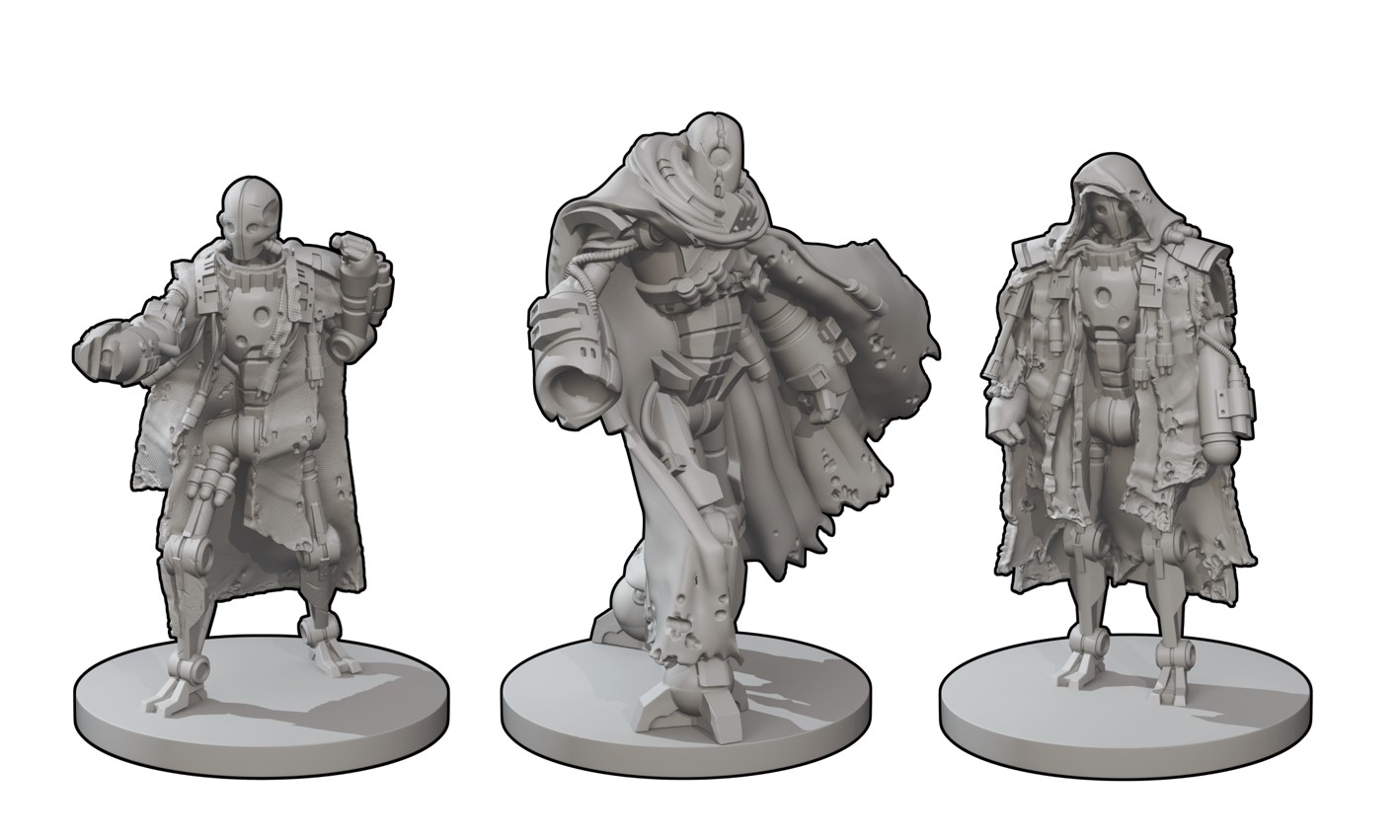 Rogue NPCs roll dice when they activate with three potential results – to Observe, gaining experience by watching nearby Traders; to Examine – taking items from crates or even from your Traders and dismantling them; and to revert to their Conditioning and attack! Importantly, the Rogue Purge can do all of this while most of the regular Purge totally ignore them.

Each of these things allows the Rogue to collect pegs representing the experience they have gained. When the Rogue Purge are defeated Traders can collect a Purge remains token which can be sold for up to 13UA! Alternatively the Traders can keep the chip and analyse the contents, giving them access to some unique new Purge Skills (see the Rulebook below). The more experience the Rogues have gained before they are defeated the more valuable their chip, but the closer they are to escaping!

This pack contains three times as much card as a regular crew pack. You’ll get seven double-sided character boards – one for each character in the set and two extras so you can expand your Trader crew with more captured Purge (even converting their miniatures if you wish!). Each character also comes with a new Purge Class board, packed with exciting new Skills not seen anywhere else, and a Ship Board for the crew.

You’ll also get over 60 new equipment tokens, including lots of the new half-sized “nano” tokens. You’ll notice that all of the new equipment is teal – a colour we’ve not used before. These items are unique to the Purge – they are items that have been crafted by combining standard tech with Purge components, and cannot be bought! They’re not strictly limited to Rogue Purge crews though – regular crews can still find them in certain missions, or by defeating Rogues. Here are some examples of the new kit:

Finally, there are some new counters and tokens. As well as the Fire/Poison tokens used for some of the new weapons, you’ll get 15 Purge Remains tokens and 9 useful new Lock counters. These aren’t exclusive to the Purge – they have a slot in the bottom so that they can be mounted on top of walls to mark locked doors. We’ll be making these available separately in the near future for anyone that wants more.

The rulebook in this set is twice the size of a crew book. As well as telling you everything you need to know to add Rogue Purge NPCs to your games, it also allows you to use them as a complete Trader crew and giving you a whole new way to play. Unlike a regular crew, hired for money, Rogue Purge crews start out with a single character (the Live One) and no equipment!

To grow your crew you will have to defeat, capture and reprogram regular Purge units. You can’t walk into a shop and buy equipment, so although you can use some of what you find, most of the time you’ll be repurposing it – combining different item types along with the remains of yet more defeated Purge to craft your own weapons!

Every decision you’ve made about how to most efficiently fill your equipment tray will be irrelevant and you’ll have to learn from scratch, while making do with battered and broken Traders. This crew is for veteran players – you have been warned!

There’s a pay-off though – as they gain experience the Rogue Purge become more powerful than any regular Trader, especially considering the unique new Purge skill table.

The book also contains three new missions to play through with your Trader crew that will introduce new challenges and objectives. The first two introduce the Rogue NPCs, while the third is a starting point for using the Rogue Purge as a Trader crew! You can play the missions co-operatively, competitively or solo, and they can be easily added into existing campaigns as ‘side-quests’.

The final component of the expansion is a set of Event Cards that can be shuffled into your deck when you want to use the new NPCs. For example, Decay Protocol raises the Hostility and reduces the experience on the active Rogues whereas The Wanderer brings a Rogue Harvester onto the board, who may call his friends too!

If the Rogue Purge have not yet been revealed, these new cards will bring new Civilians onto the board – any one of them could be a Rogue in disguise! 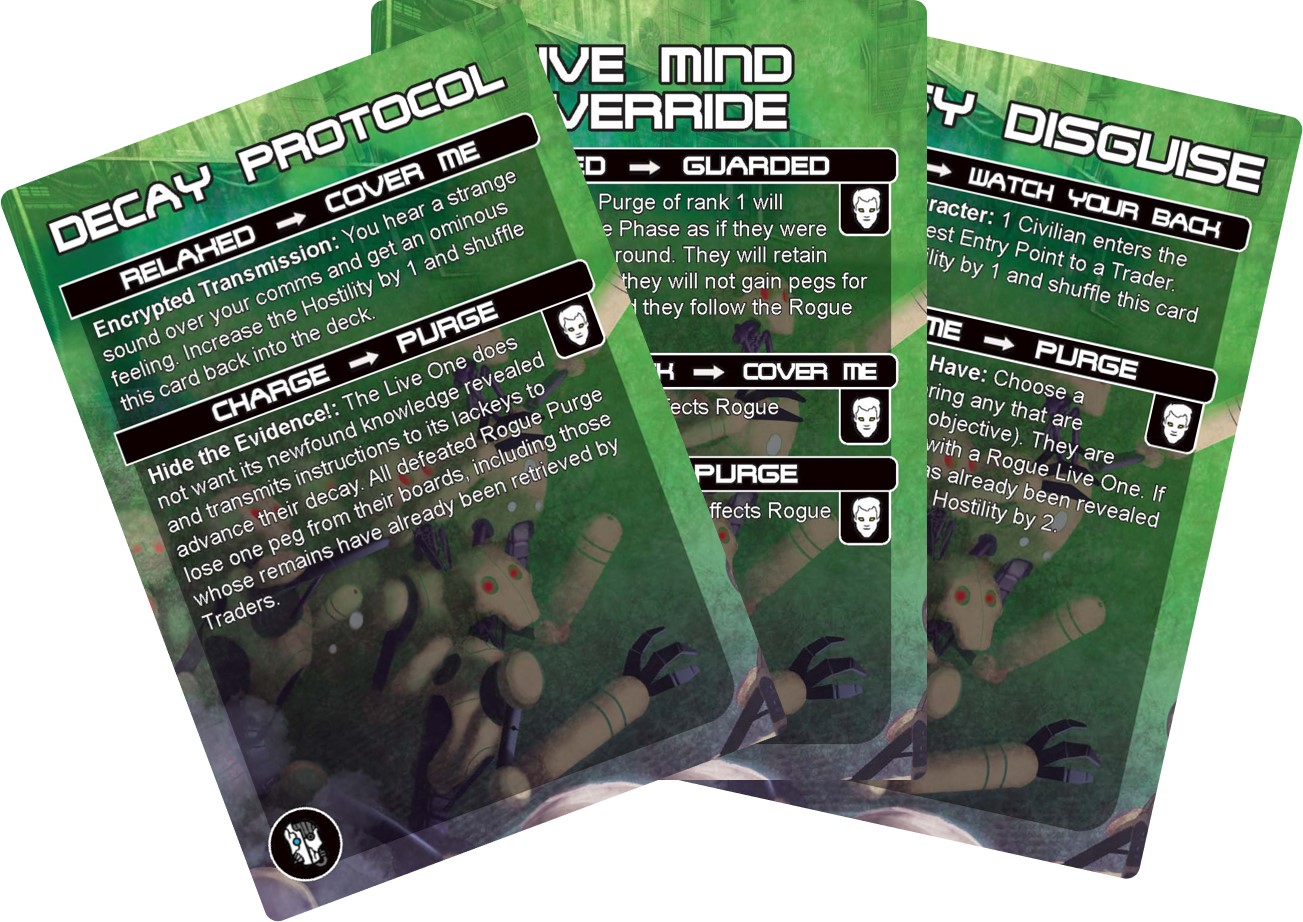 Rogue Purge is up for pre order NOW, and is also available from some of our stockists! If your local store doesn’t stock Battle Systems yet, why not? Ask them to get in touch and we’ll sort them out with some stock including free demo sets to get some gaming going in-store.