Get to the Shuttle!

Get to the Shuttle! is a mini-expansion for Core Space that introduces a brand-new piece of terrain, and mode of transport! It’s released in September 2019. 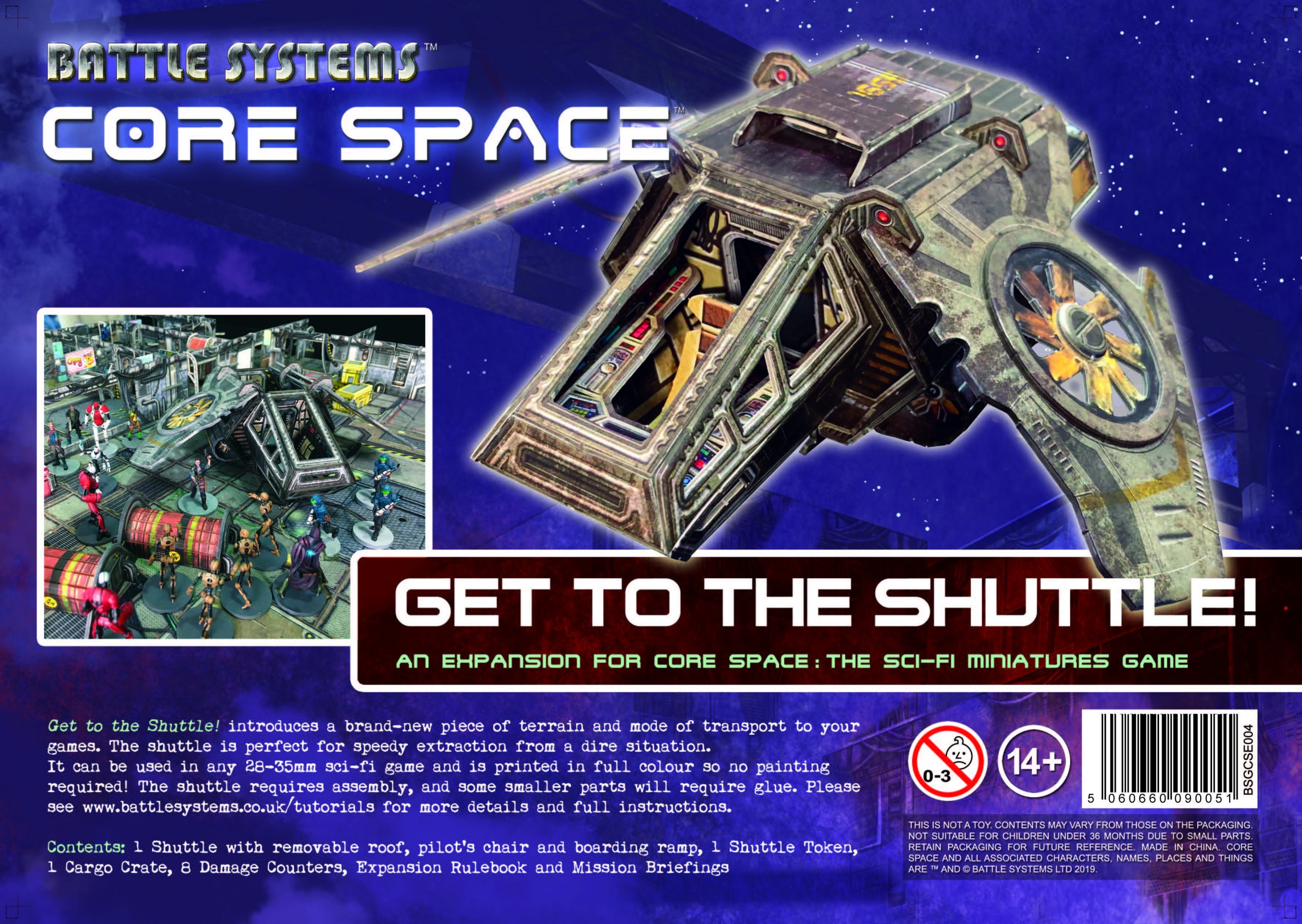 First and foremost, this is a cool space ship! It can be used as a vehicle or a stationary terrain piece in almost any sci-fi game you can think of. It’s got a chunky, functional design that will be at home in most gritty settings.

It’s got a detailed interior and removable roof for RPGs and skirmish games, the wings come off for easy storage, and it’s light enough to put on a flying stand should you wish to.

If that wasn’t enough for less than £10, it’s an expansion for Core Space too! It includes rules for using it in game and two new missions to play.

Read on to find out more.

The Shuttle is built with the same high quality arwork and from the same strong, high-density card as the rest of our range, so the finished kit looks great and is very sturdy. 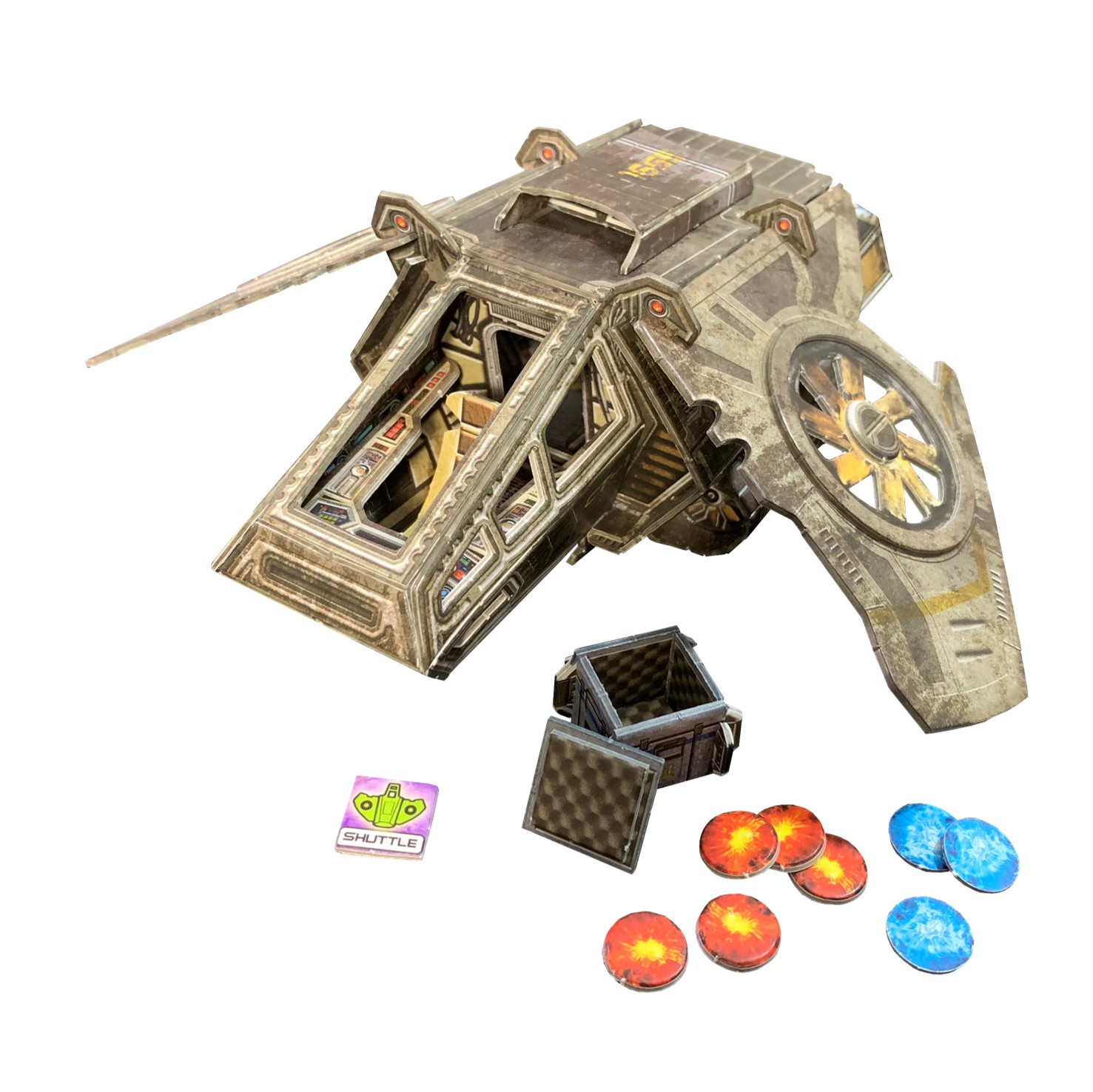 This is a slightly more advanced kit than most of our terrain as some pieces like the engines and intakes do require glue. It’s still easy if you know what you’re doing, and once you’ve watched this tutorial video, you will!

The Shuttle measures 18cm long with a wingspan of 21cm.

This is a very flexible kit. It can be built as a solid piece, leaving all the doors and windows in place for an enclosed vehicle. However, if you want to make it more interactive you can easily fit miniatures inside, and the cockpit chair has been designed to pop in and out so you can replace it with a mini. There is a even slot in the chassis  underneath the back door allowing you to slide the open door in and use it as a ramp! 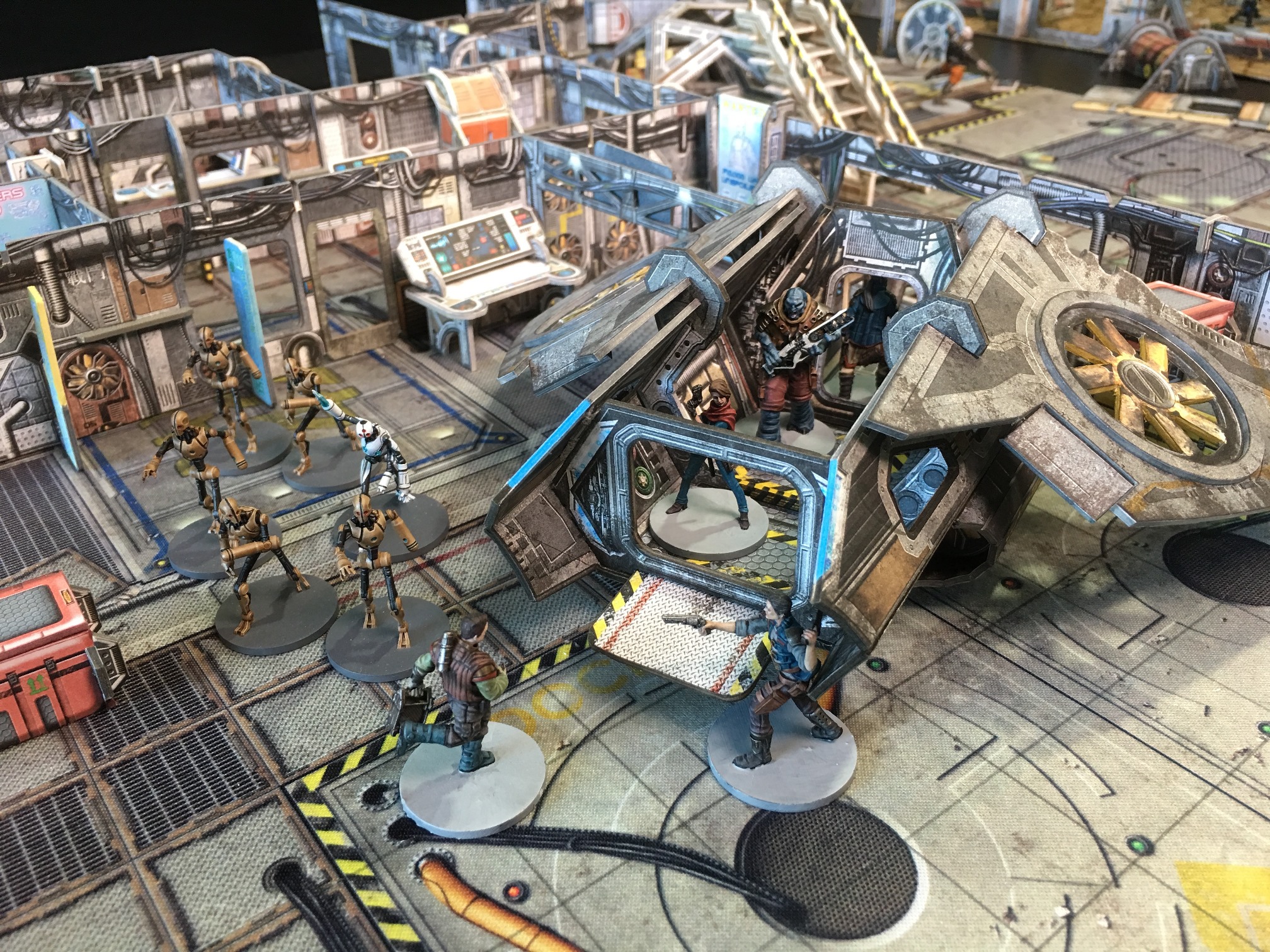 If you’re feeling ambitious you can go even further with it too! 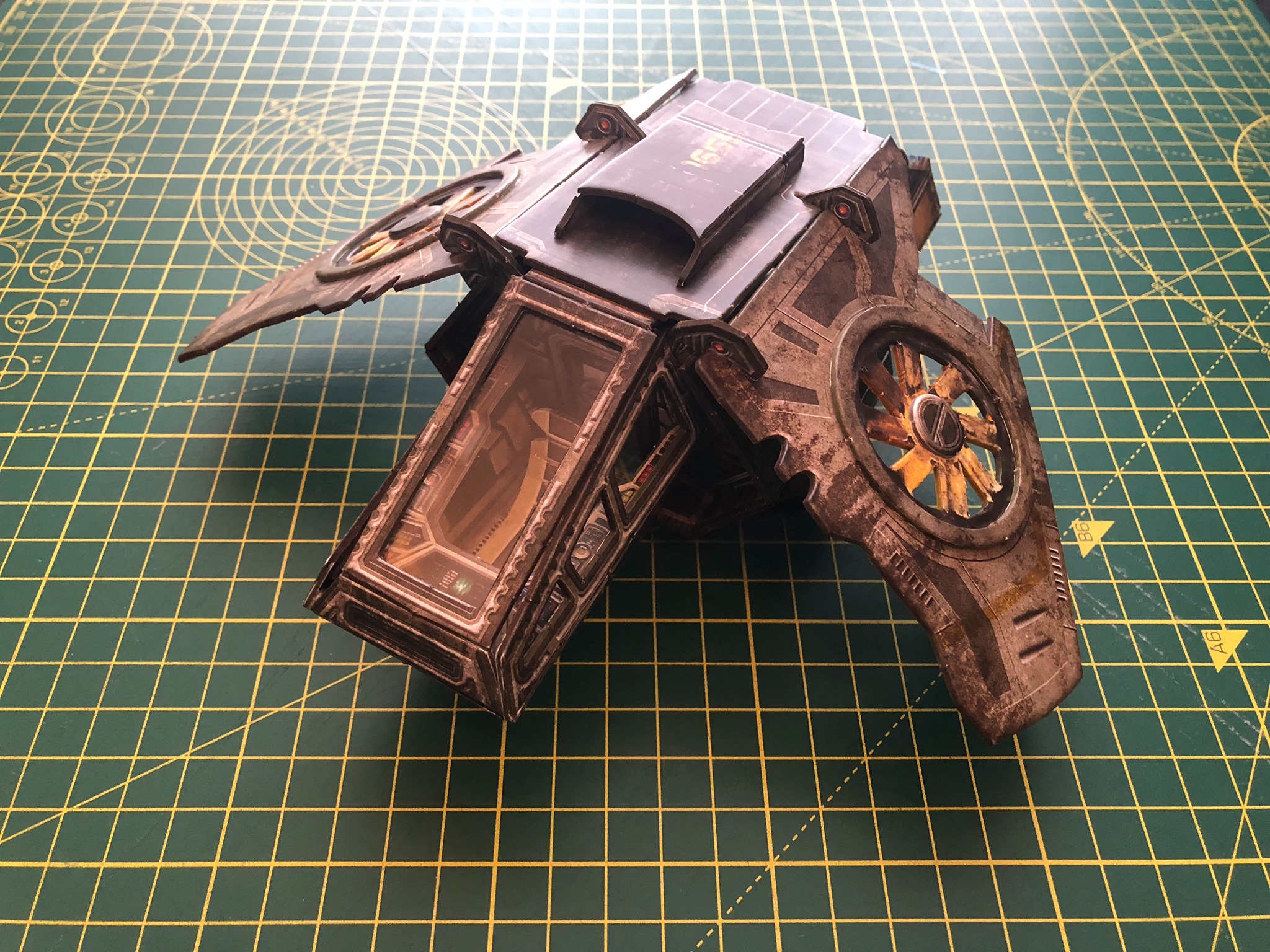 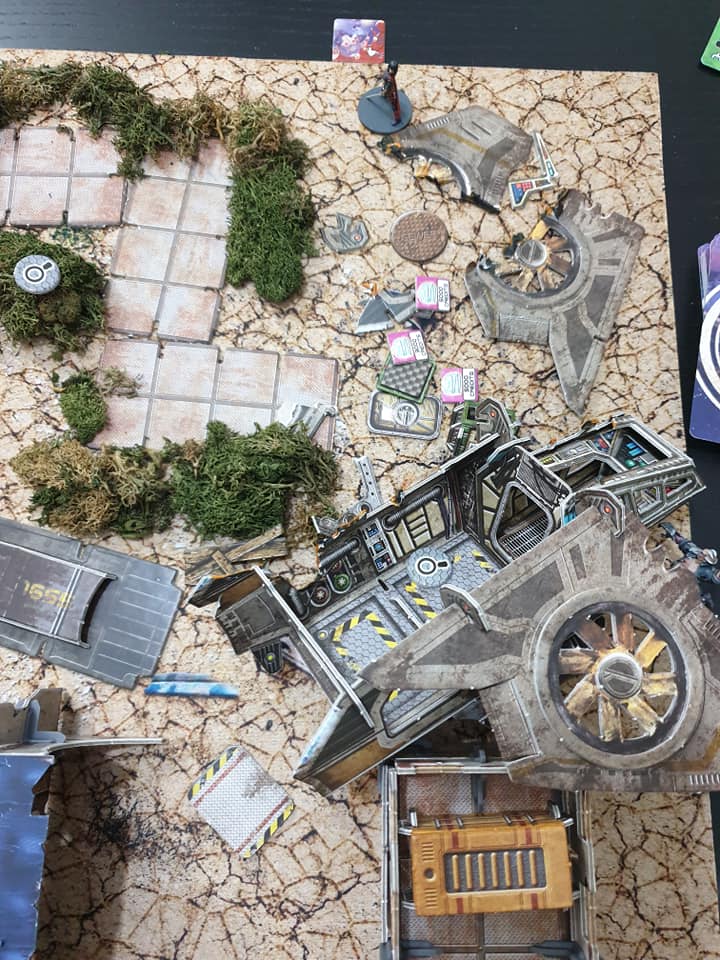 Using the Shuttle in Core Space

The Shuttle can be purchased between games like a piece of equipment, and is stored in your ship’s hold, taking up cargo space. At 90UA it is pricey, but it can also be rented at just 7UA per game. There’s a discount for purchasing it after the rental period, just like buying your company car :-P.

It can be used in game in multiple ways:

The Emergency Extraction rules allow the Shuttle to fly in an rescue your crew from tight situations. A Trader has to use actions to call it in, and then it will arrive at the end of the round. Once it turns up, it is scattered randomly, to represent it finding the nearest roof or open space to gain access. If the Traders can get to its landing position, they can escape the board without having to return to their airlock.

It can be used between games too. In the Extraction Phase it can be used to mount a rescue mission, deploying in a similar way to the above, allowing you to save a stranded crewmate. In the Trade Phase one of your Traders can use it to visit a distant trading post, allowing you to purchase from two stores per phase instead of one. Finally in the Maintenance Phase you can use it to gain easy access to the outside of your main ship to make some free repairs.

There is also an optional rule to use the Shuttle for deployment in custom missions, especially those set outside using our Outlands terrain. 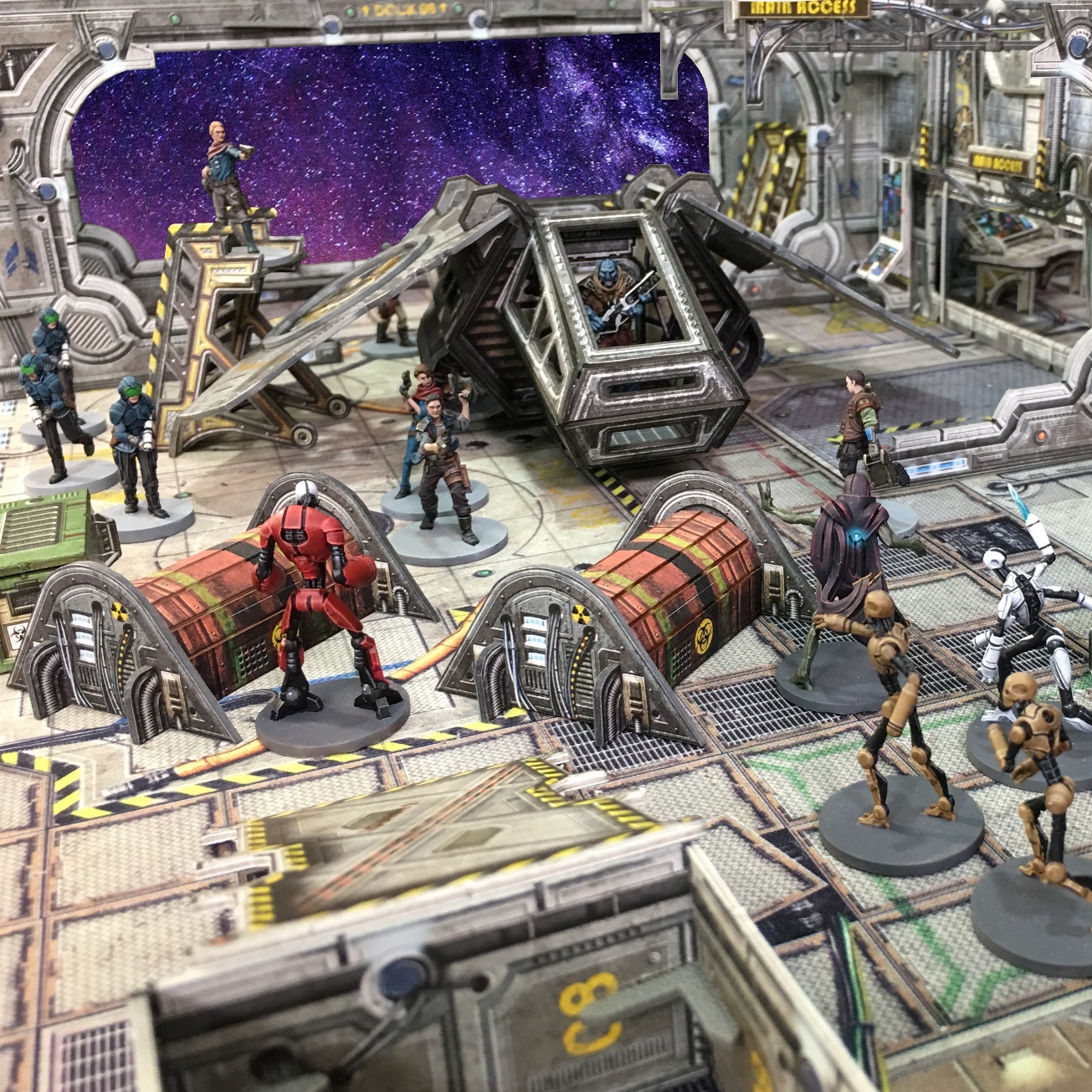 Get to the Shuttle is released in September and can be ordered from our website HERE or from your local store. If your local store doesn’t stock Battle Systems yet, why not! Ask them to get in touch and we’ll sort them out with some stock including free demo sets to get some gaming going in-store.