The Galactic Corps is the latest expansion for Core Space, our sci-fi miniatures game, and is available now. Read on to find out more. 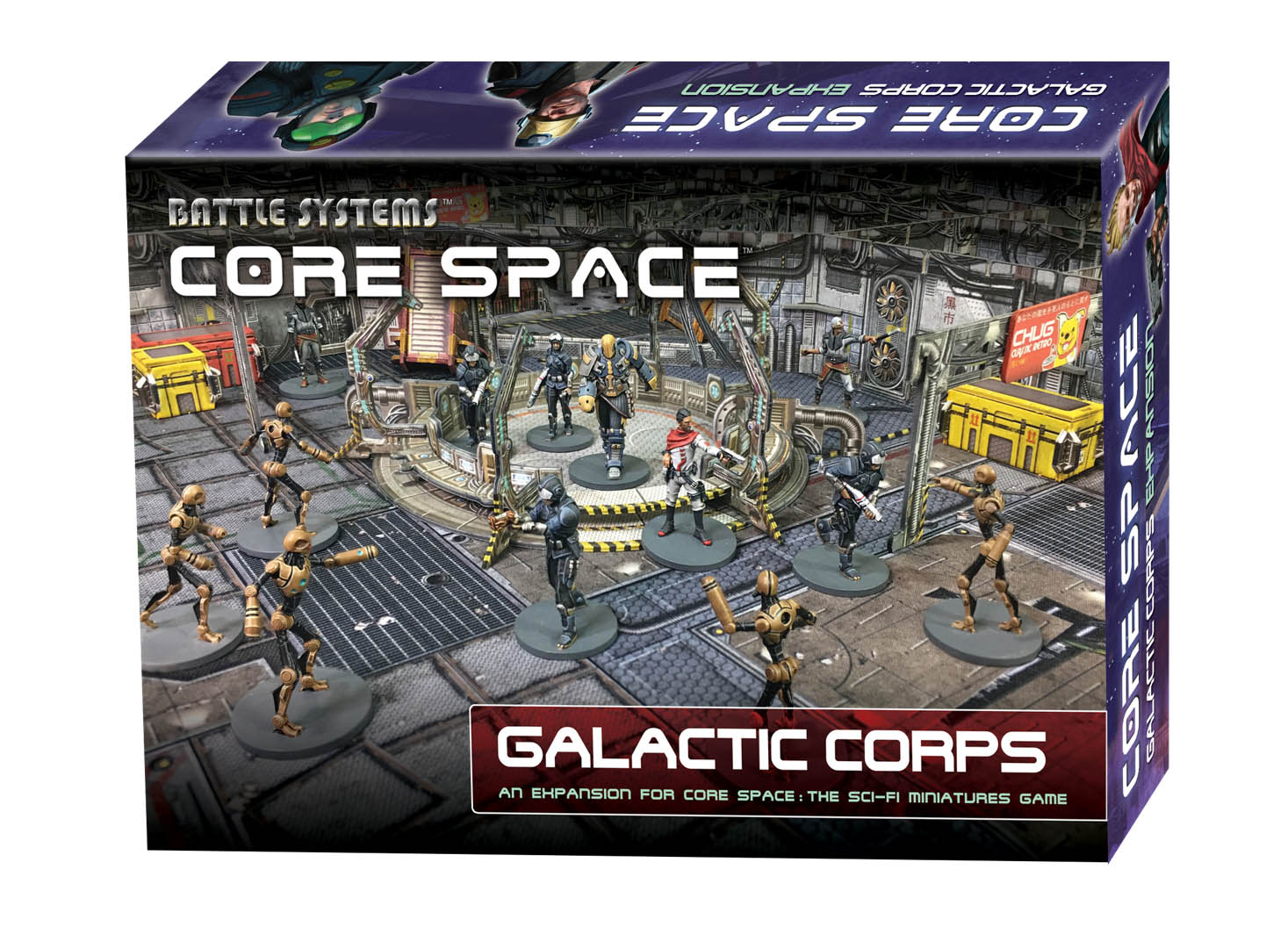 Like Shootout at Zed’s, The Galactic Corps has been built to add value to the game no matter how you play – co-op/competitive, narrative/generic, board game/advanced skirmish game.

You can play through the missions in the box as part of an ongoing campaign, or you can add the Security Wardens, the new terrain or the Galactic Corps themselves to any mission you wish. You can even play through the narrative campaigns from the rulebook or other expansions for a second time, but this time with the added threat of the Corps for extra replayability! Some missions (such as Gentrify the District in the Shootout at Zed’s expansion) even have rules for using the Corps built into the narrative.

The Galactic Corps expansion focuses on adding some discipline to your games. No longer can you run around looting places willy-nilly. That’s a crime you know! The Security Wardens, Galactic Guards, Juggernaut and Galactic Director are four new types of NPC controlled by the game’s AI, and while they will attack the Purge like everyone else, they will also attack (and arrest!) your Traders! Let’s find out what you get in the box:

The Galactic Corps comes with eight new miniatures; every one of them a unique sculpt.

The Galactic Guards are the numerous nameless henchmen, highly trained, highly disciplined, but expendable and not so well armoured. 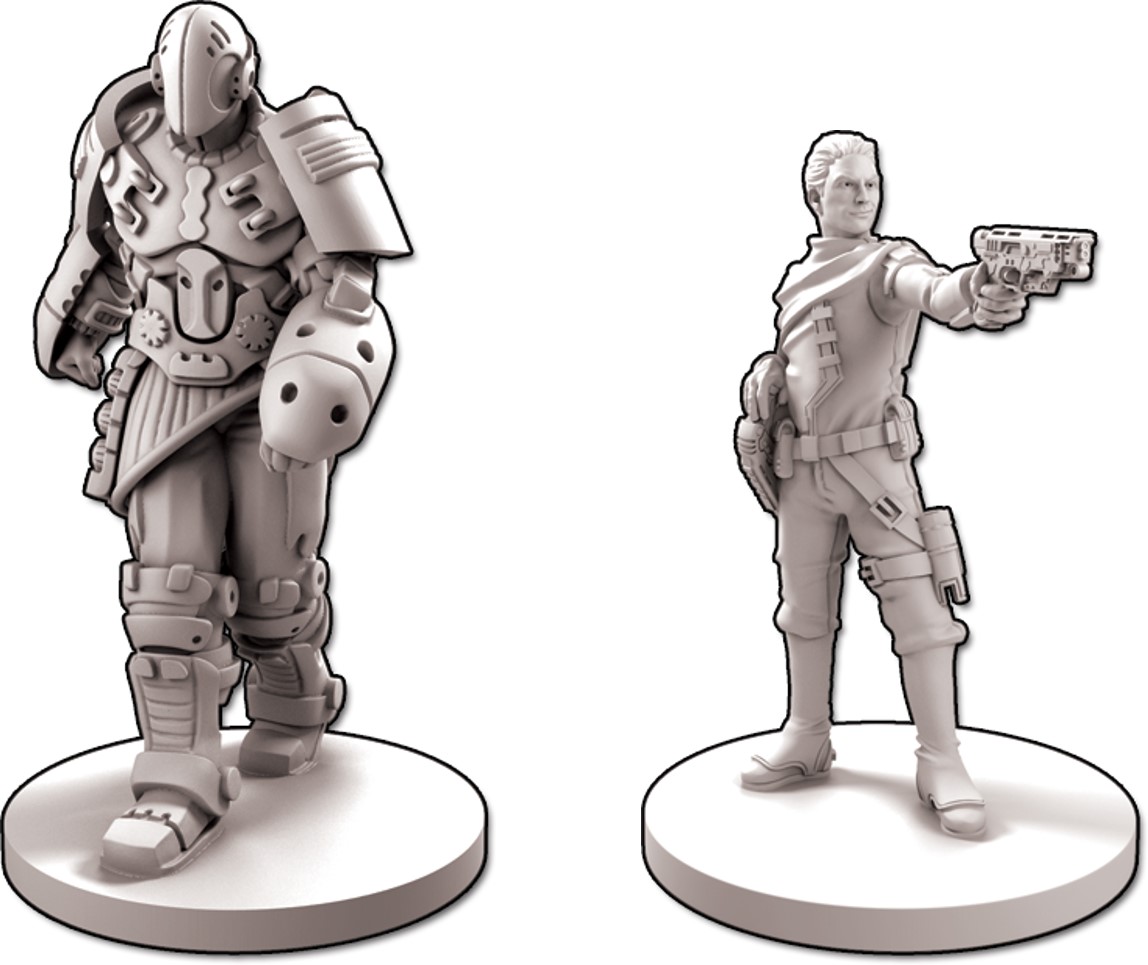 Juggernauts are chemically enhanced soldiers, heavily armed and armoured, employed only to do the bidding of the Galactic Director, a ruthless strategist and powerful adversary. 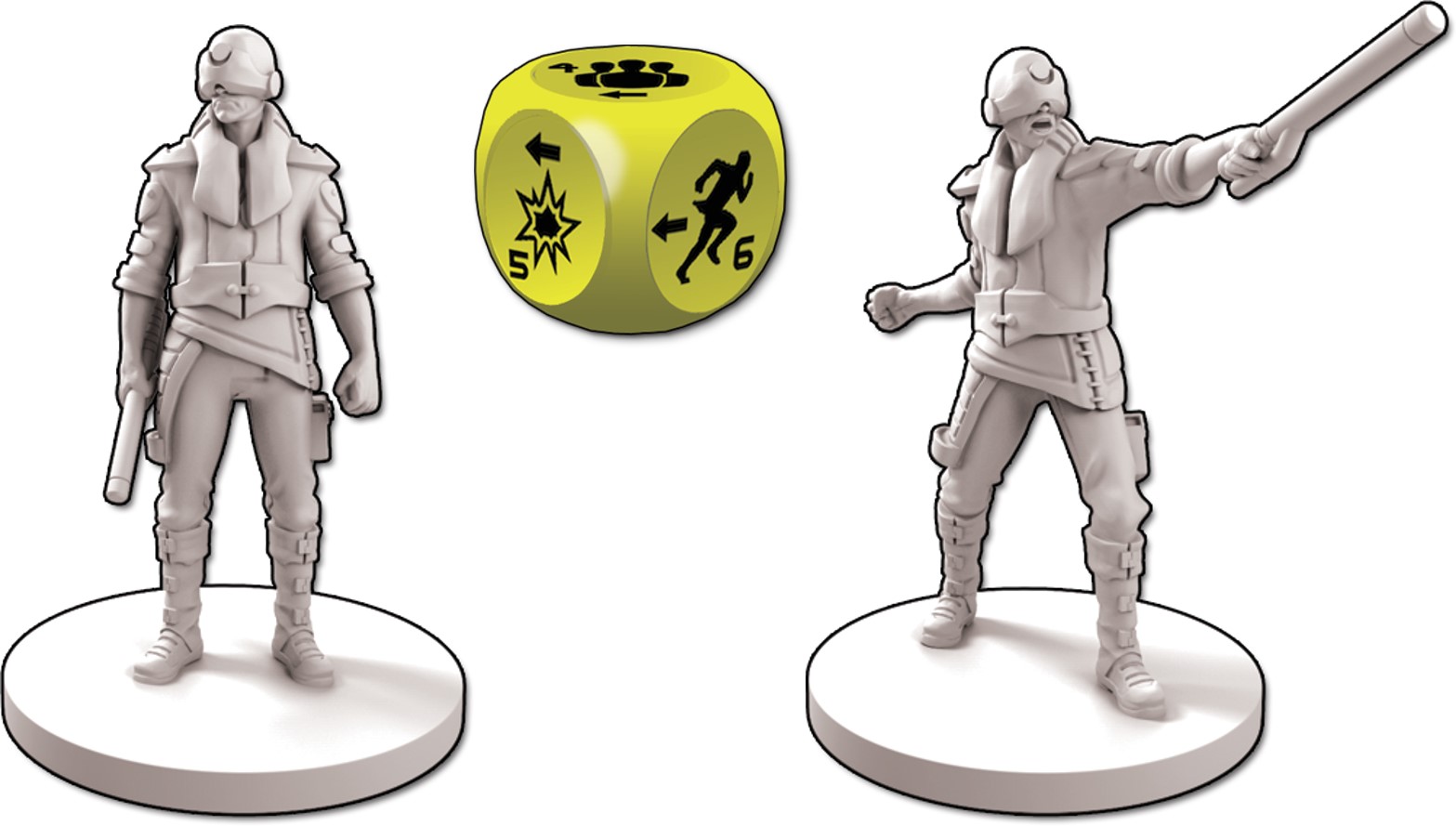 Security Wardens are not part of the Corps; they are locally appointed police or guards for hire. They will question and search your Traders and generally be a thorn in your side, controlled by the brand-new Security Die in the box. This works just like the Chance Die that controls the Civilians, but with some new results.

Every character comes with a double-sided character board just like the Traders in the core game and crew boosters. Unlike other characters however, these ones cannot be used as Traders. Instead you’ll find their standard NPC rules on one side of the board, and ‘Elite’ versions on the other side – just another way to up the difficulty if you want to make your games more of a challenge! 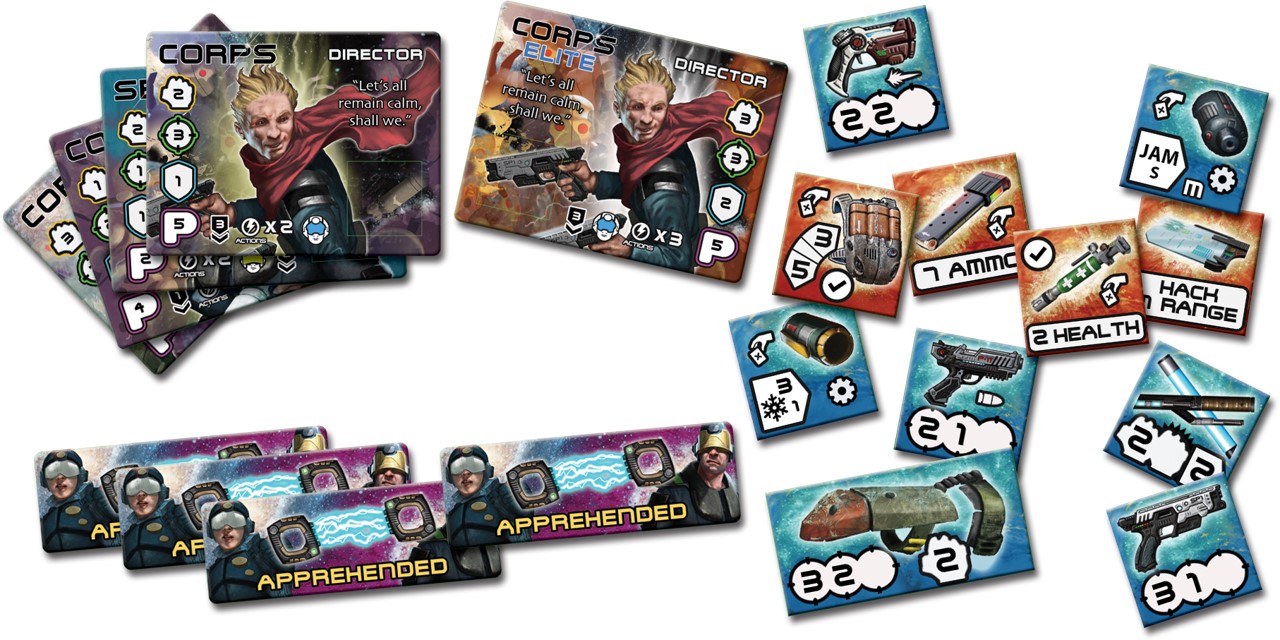 Also unlike other characters, the Galactic Corps do not come with Class Boards. Instead they come with ‘Apprehended’ boards – these are placed over the dashboards of Traders to show that they have been arrested. If their comrades can’t free them from their bonds by the end of the game the crew will have to either pay their bail or lose them for a number of missions while they serve their time!

Like all Core Space characters you will get new equipment tokens too – a total of 11 in the box. This equipment is not specific to any characters and can be mixed in with the tokens from the main game and other Core Space sets for your Traders to find or purchase. 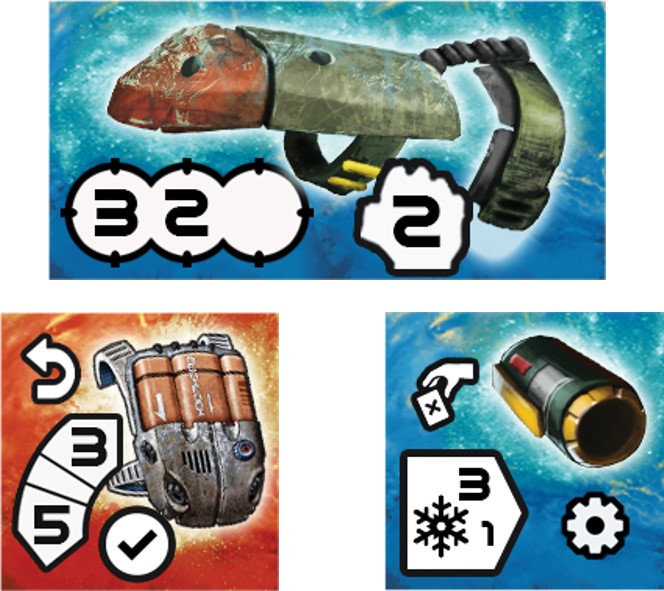 Want a makeshift Juggernaut? The Riot Fist is a new Rare item that not only gives you a pretty effective ranged weapon, but can also be used to punch people in the face. Remember that this unarmed combat value can also be used for Knock Back rolls, allowing your Traders to clear areas much more easily. The expansion also comes with the Time Pulse Grenade that can freeze an enemy in place, and of course the Jump Pack! This will give a Trader a quick burst of speed and make scaling multi-level terrain a total breeze!

In the book you will find two new missions to play through with your Trader crew that will introduce some new challenges and objectives. You can play the missions co-operatively, competitively or solo, and they can be easily added into existing campaigns as ‘side-quests’.

This wouldn’t be a Battle Systems product without some new terrain! The Particle Transmitter allows characters to teleport in and out from the middle of the board, which can play havoc with your plans when it comes to defending entry points! It is also a great focus for a mission objective as seen in our latest free mission download, Particular Transmission.

You will also get a full sheet of scatter terrain, with extra crates and equipment perfect for staying in cover with all the extra bullets flying around!

So, how do you add the Corps to your regular games, without the narrative of the campaign to drive the story? Well firstly you can use the flipside of your Hostility Tracker – you’ll see a Galactic Guard icon in the Charge section that will bring them onto the board. 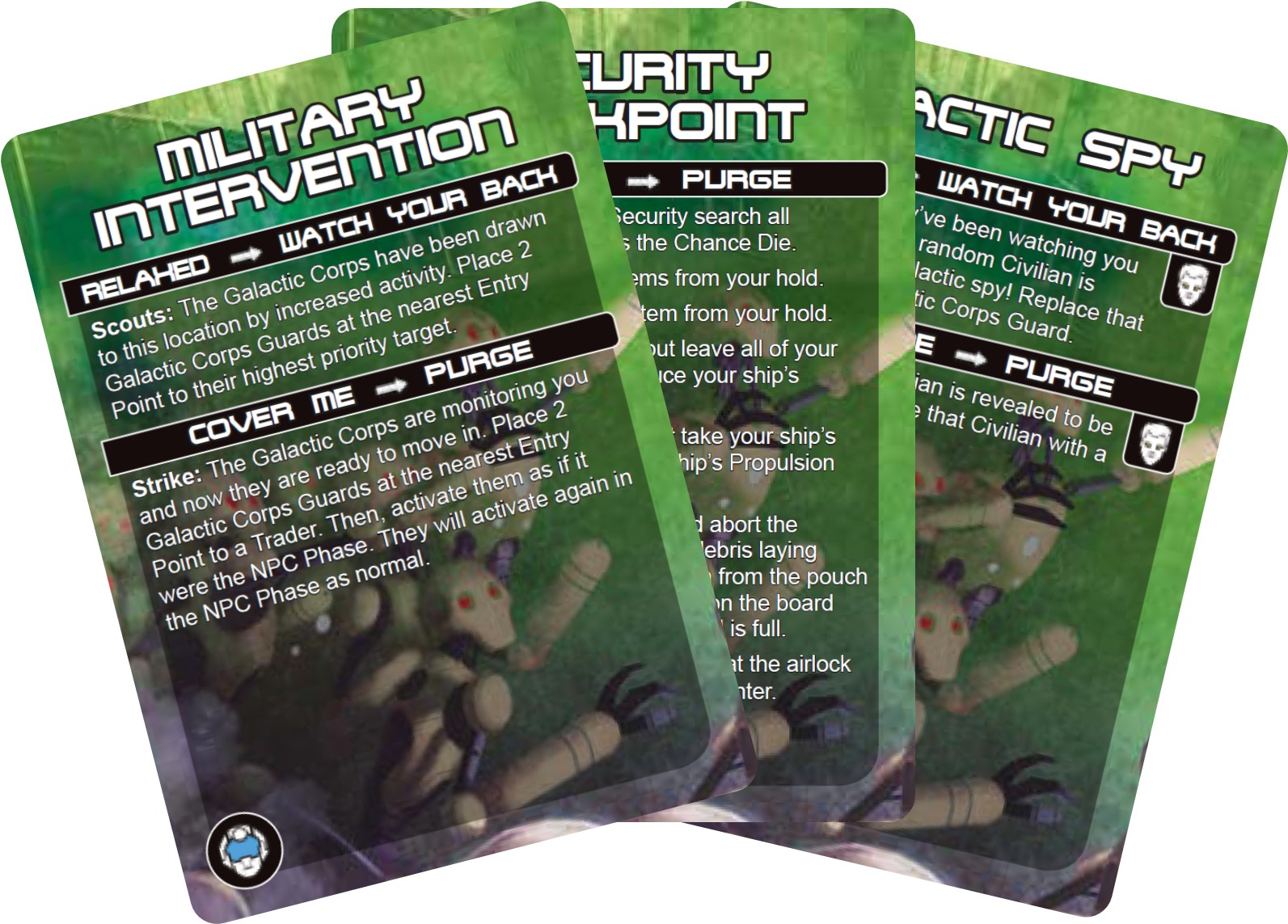 That’s not all though. The final component of the expansion is a set of Event Cards that can be shuffled into your deck when you want to use the Galactic Corps. Some cards will bring extra Guards onto the board or even the full force of the Corps! Others like Galactic Spy will see a Civilian reveal themselves as an undercover cop, and the Security Checkpoint card sees the local Security Wardens ransack your ship’s hold while you’re not there! 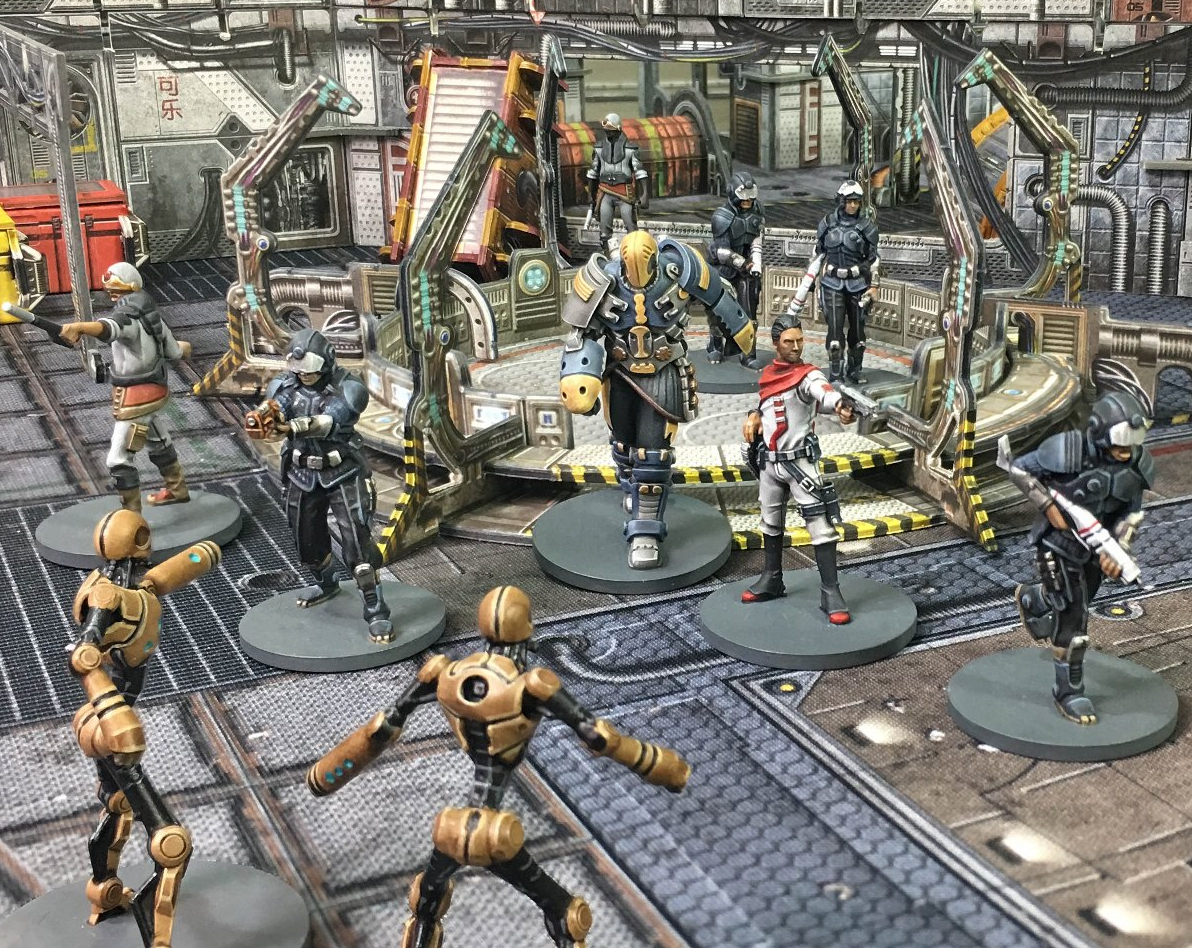 The Galactic Corps is available now and can be ordered from our website HERE or from your local store. If your local store doesn’t stock Battle Systems yet, why not! Ask them to get in touch and we’ll sort them out with some stock including free demo sets to get some gaming going in-store.