Each time you make a board game purchase, you may look at the price tag and think ‘How many times will I play this? How much is it costing me per game?’ It’s not always an easy decision.

Campaigns are the perfect way to make that choice and justify your purchase, and campaigns are at the heart of Core Space. A campaign is simply a series of games played one after the other, usually linked with a narrative. You’ll use the same group of characters from start to finish; you’ll get to know them, develop their skills, and build their story. Starting a campaign is a compelling way to keep playing Core Space and make every game exciting and important. 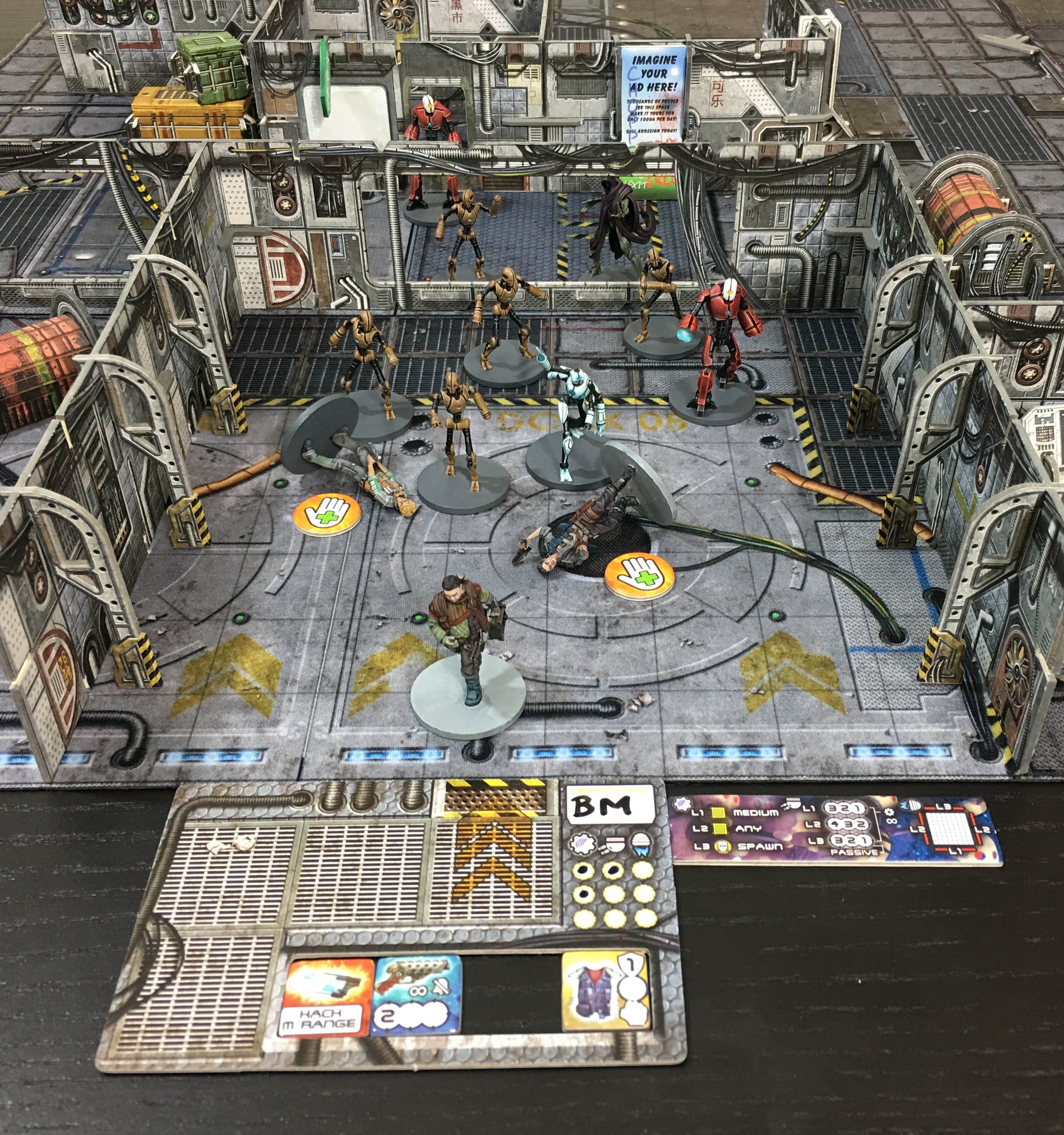 Setting Up a Campaign

To set up a campaign, you and your gaming group will just need to agree a regular time to play, and how long you want your campaign to last. You may decide to have a fixed story where all the Trader crews are travelling to a specific location for a final showdown, or you may decide to leave the narrative open and just play games until you’ve earned enough to upgrade your ship. The Core Space universe provides a massive sandbox to play in so in terms of narrative the scope is endless.

The rulebook includes a pre-made 10-mission campaign with a storyline that progresses from game to game and we recommend playing though this first to immerse yourself in the universe before diving in and designing your own. 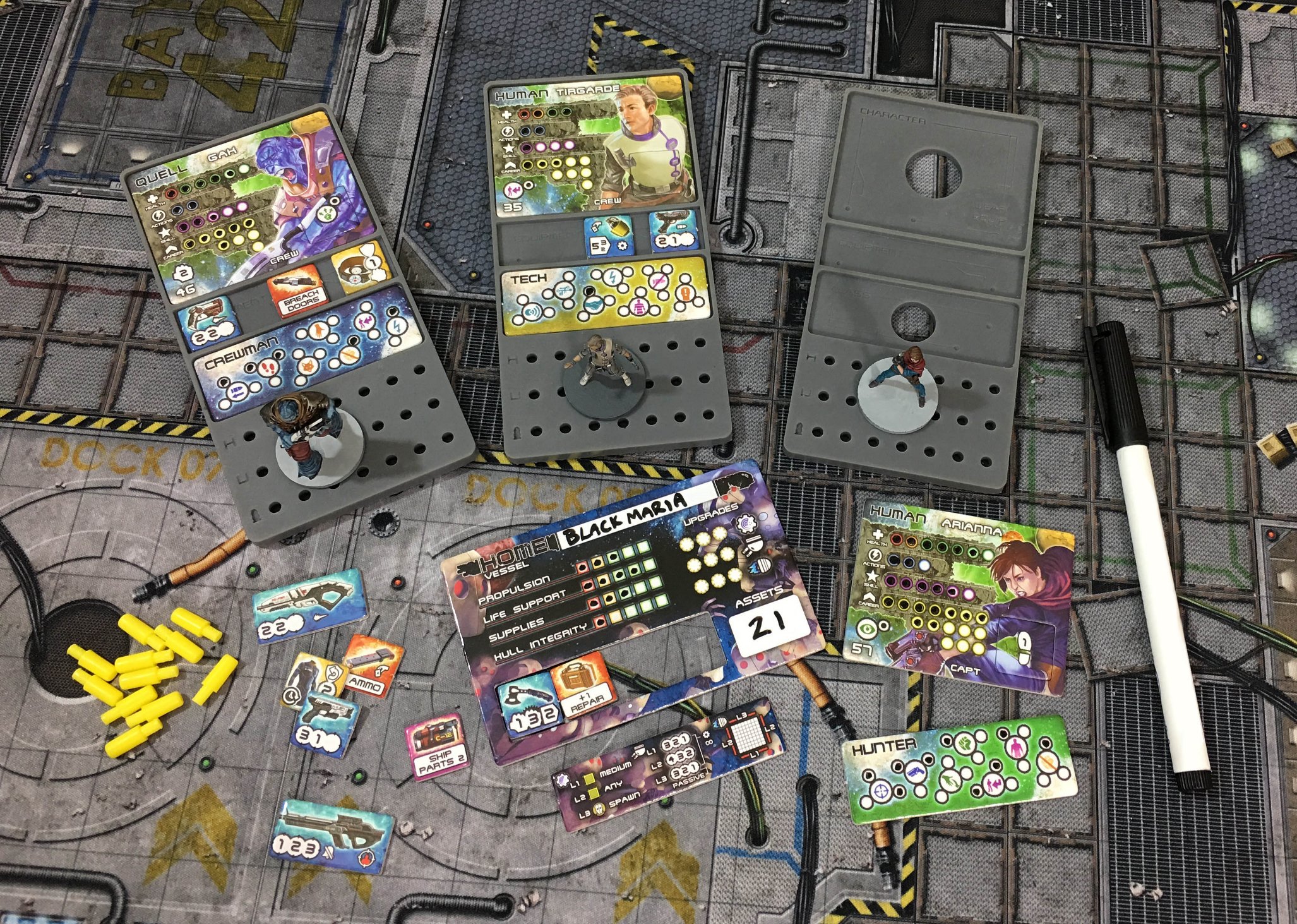 The first thing each player will need to do in a campaign is to pick their crew. The Starter Set comes with 11 different Traders, and each Crew Booster gives you four more, which can all be mixed and matched freely. Alternatively, all Core Space crews can be used straight out of the box and are balanced against each other.

Colin and Justin dive into setting up a campaign in more detail over at Beasts of War – check out the video below. 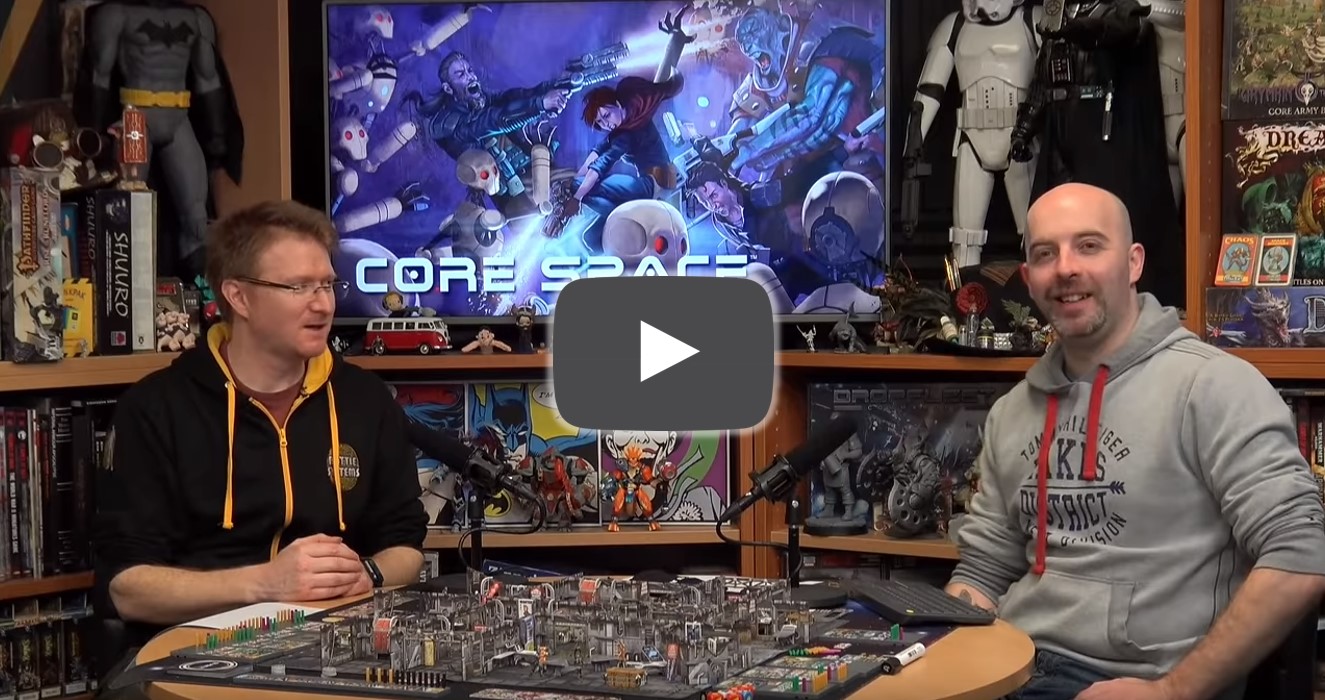 Once you’ve got a crew, they need a home! Core Space campaigns are based around your ship. Your crew will take on jobs and get themselves in dangerous situations, Firefly style, to keep their ship afloat. Its condition will deteriorate as time goes on so you’ll need to set money aside for repairs. The Ship Board represents your chosen vessel and tracks its condition from game to game.

As you can see, the reverse of the Ship Board is your airlock – this butts up against the game board to act as your deployment area and can also be used to store excess equipment!

Between your regular games you may decide that you want to tool up your crew a bit more, or you may be the underdog in a long running campaign and want to even things out. To do this you can run side missions, representing quick smash and grab jobs to build up cash before returning to the main storyline. The Salvage Run mission in the rulebook is perfect for this, and we’ll be adding more side missions as free downloads in the coming months.

These missions may even be where the bulk of your cash comes from. The narrative missions can be tough, and unlike a lot of games completing mission objectives is not mandatory in Core Space. Missing out on objectives will surely make your next game harder, but what’s really important is staying alive! You can always make a deal with your opponent to share spoils later!

After playing a campaign game you’ll have a few more phases to run through to determine how the game’s outcome has affected your crew.

If any of your crew got left behind, you’ll need to get them out. You can use their emergency teleporter, but the tech isn’t totally reliable so they may not return in the same state. Alternatively you can leave them to their fate – they may be kidnapped, sold into a gang, or captured by the Galactic Corps and you’ll need to pay dearly for their return. 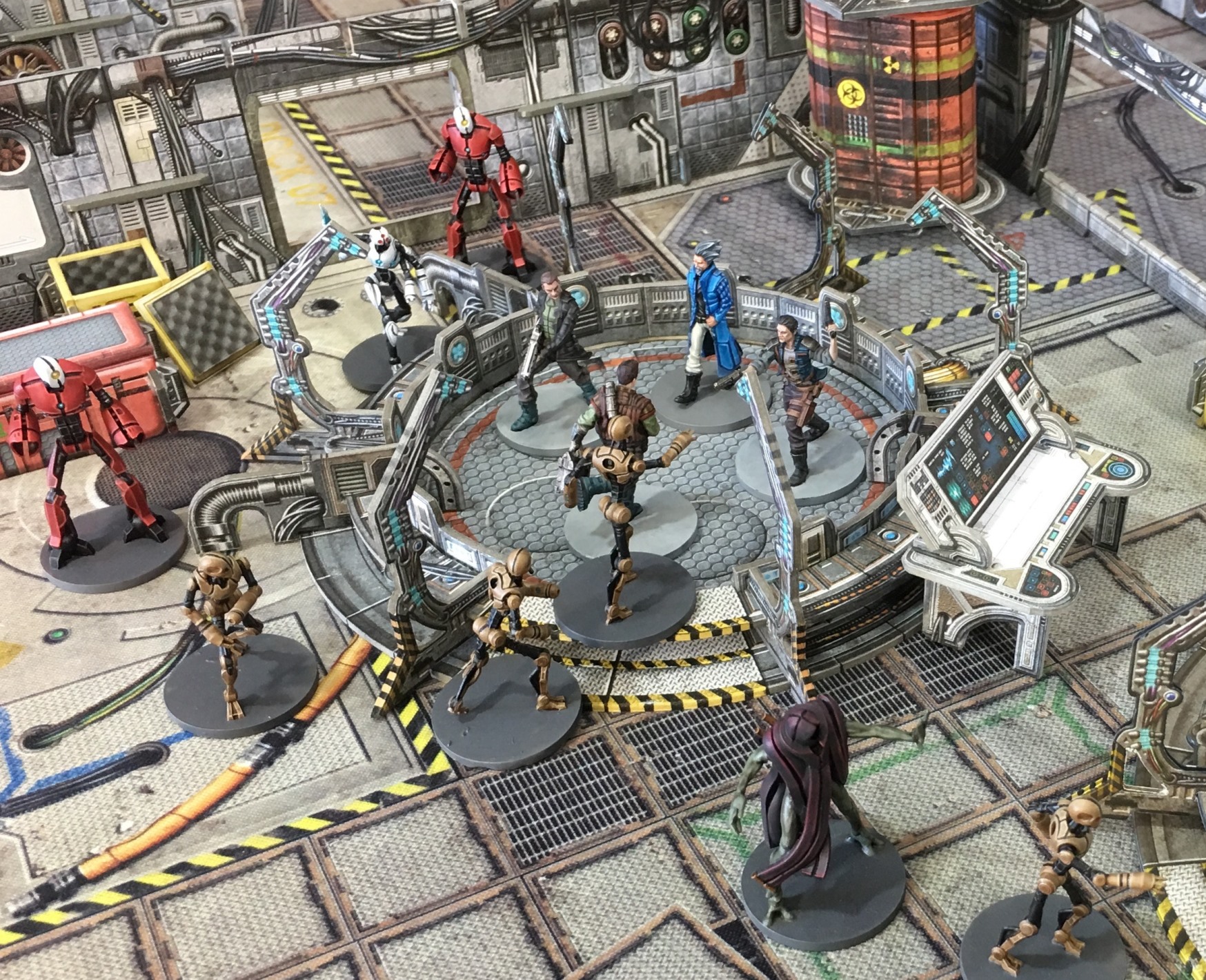 You can also play Rescue Missions and go back into the game to retrieve them, but you won’t have time for more than a quick reload so it’ll be tough!

Any crew that survived the mission will gain Career points in this phase, which they can spend to learn new skills. As you will have seen in the video, one of the most exciting things about picking your characters is choosing their career. Based on your personal playstyle and the other characters in your crew, you have the option of lots of different skill trees, each with their own advantages. This adds a huge amount of replayability as you can pick different skills each time to build different characters.

Traders can also ‘level up’ at certain points on the Career track, gaining more actions and health.

In the Trade phase your crew can sell their haul from the latest mission, and pick up new items as well. The game has five different stores to visit and there’s only enough time and fuel to reach one, so you’ll need to plan your purchases carefully. If you want to pick up a fancy flak jacket from Armourote you’ll have to go without grenades for now…

Of course, the stores aren’t the only place you can buy things. In Core Space players can freely barter with each other – you can swap money, equipment, mission objectives, and even crew members! 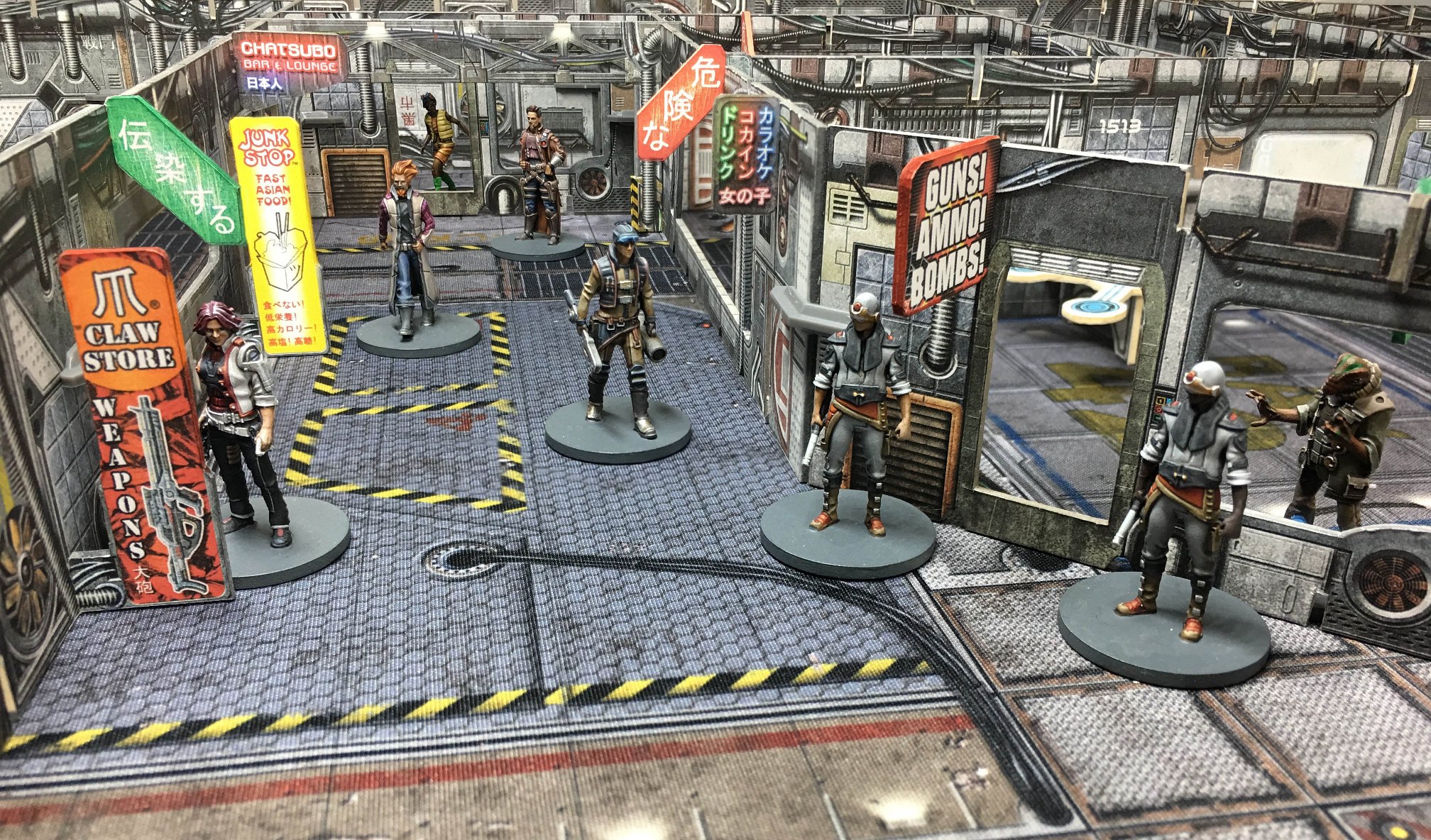 You can also hire new crew in the Trade phase. You’ll be given a random selection depending on who’s in the cantina at the time, or you can hire Civilians that you encountered during your previous mission for a nice discount.

In this final phase you will need to use your spare cash to make ship repairs. This can make money tight, but once you’ve fully repaired your ship you can even upgrade it. This allows it to take part in your missions, with gun turrets mounted on the airlock or thrusters that literally move your deployment zone around the board!

So, Core Space or Kill Team?

If you’re in the market for a new sci-fi campaign game, hopefully this has convinced you that Core Space is the one. I’ll leave you with Charlie over at Ding and Dent – his opinion is most certainly clear on the matter! He wants Core Space to replace his group’s Kill Team campaign. His podcast is a great listen and you can find his Core Space coverage HERE.

You can pick up Core Space HERE. Keep up with the latest news by signing up to our newsletter HERE.