Miniatures games, especially those towards the skirmish end of the scale, can get fiddly. Many of them use counters, dice, or handwritten rosters to keep track of your characters’ health, special abilities and any other resources.

Core Space solves this issue neatly with its bespoke plastic dashboards. They keep everything in one place and easily visible, and the design means you don’t have to worry about the table getting knocked as the raised lip and tight-fitting pegs keep everything firmly in place. 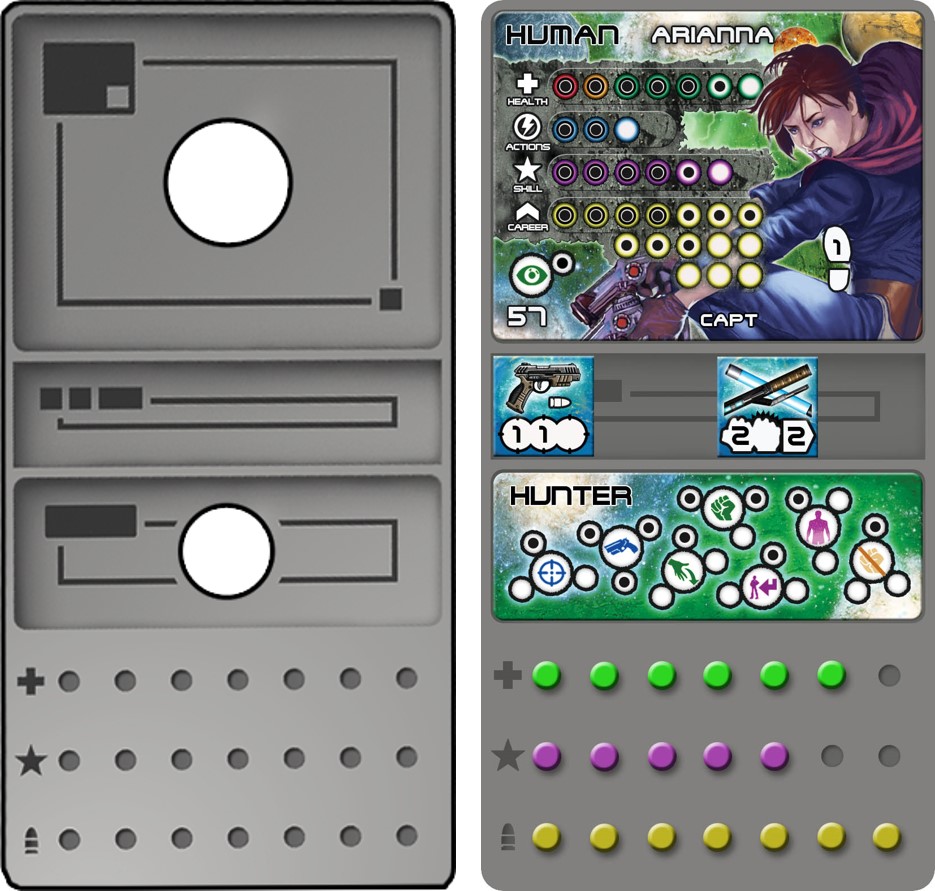 Let’s take a look at how they work:

The top section contains your Trader Board. This contains your character’s personal details (name, species, etc) and statistics. It is these statistics that determine how the character acts in game. 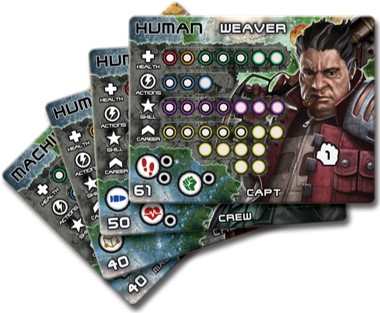 The four main statistics are Health, Actions, Skill and Career, each depicted by a series of circles. You will notice that each statistic has some spaces filled out with an inner circle (default), and some left blank (potential). Default statistics show the character’s starting level, whereas the potential spaces can be filled when levelling up in the Advancement Phase (see Campaigns). A character can never exceed their potential, but they can drop below their default!

You’ll notice that Core Space Trader Boards have a laminated finish. This adds strength to the card, making it feel almost like plastic. However, this is just a bonus – the lamination is there so you can use a dry-wipe pen on the boards. You can use the pen to fill each space as your character advances. When you finish your campaign you can wipe it clean and start afresh!

Health and Actions are pretty self-explanatory. The Skill statistic allows the character to use Skills during the game. These are one-off special abilities that can really make a difference when things get tough. Skills are represented by the coloured symbols on the Class Board (see below) and sometimes on the Trader Board too. They can be found in the reference section at the back of the rulebook (also available as a free download).

The Career statistic represents the character’s experience during their time in the crew and affects how many Skills they can learn, as well as improving their other statistics later in a campaign. Each completed row will enhance a character’s Health and Skill statistics, and some characters can even gain Actions!

Once the game begins, you will rarely need to use the Trader Board. The two statistics that change during the game, Health and Skill, are both transferred down to the peg section at the bottom so it’s very visual (more on the pegs later). For a non-campaign game you won’t need the pen either as your default stats are already marked.

There’s more to the Trader Board than vital statistics. Most importantly it contains a points value used for building a balanced crew. Many Trader Boards also have Skill icons – these are innate abilities that the character has regardless of their Class. Finally there is an armour slot in the bottom right hand corner. This can be used for an armour equipment token (see below), but note that many characters have an ability in this slot that they lose when they wear armour! 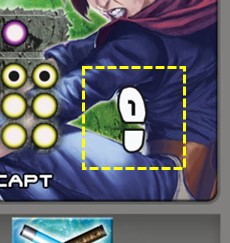 This icon in the armour slot means that Arianna can move one inch further when not wearing armour.

The second section of the dashboard is the character’s pack and is used to store equipment tokens. There is an actual, physical size limit – the character cannot carry more items than the tray can hold. Larger items such as rifles take up more space, so use this area wisely. You can’t carry everything!

It’s not just the dashboards that physically hold items. Core Space’s real-search feature makes the game board fully interactive. At the start of each game the crates around the board are physically filled with equipment tokens. When you want to search a crate as one of your actions, you literally pick up the crate and look inside to see what you find! 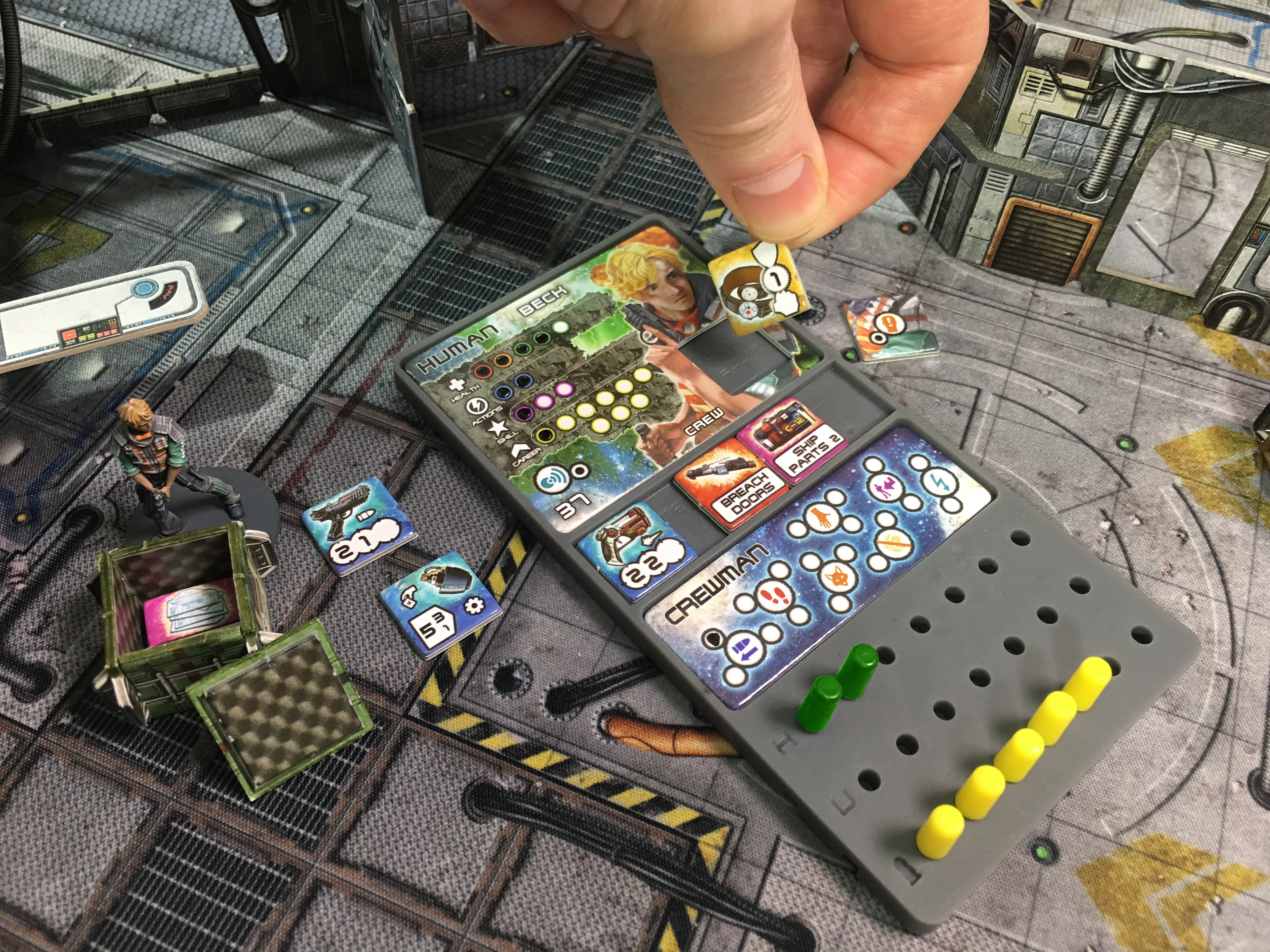 The next section contains the Class Board, representing the character’s profession and specialisation and therefore the type of Skills available to them. The Board has a number of coloured Skill icons with spaces around them to show the character’s proficiency with that Skill, from Level 1 to Level 3. One space on this board can be filled for every Career point on the Trader Board, so characters will become more skilful as time goes on. Like the Trader Board, a dry-wipe pen is used to mark these spaces and keep track of them during a campaign.

There are hard choices to be made here – do you focus on one type of Skill or be an all-rounder? Do you spend your latest Career point on refining an existing Skill or do you learn something new? These choices can really change the playstyle of your character. With a few exceptions, Trader Boards can be used with any Class as well, so there’s a huge amount of replayability.

The bottom section of the board is where the in-game action takes place. The three rows represent the characters Health, Skill and Ammo respectively, and are filled with the coloured plastic pegs provided. 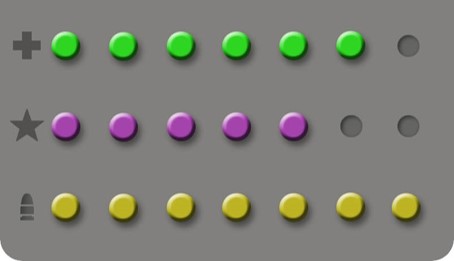 The starting number of pegs for the Health and Skill rows is taken from the Trader Board. Traders always start with a full row of ammo pegs. All of these can fluctuate during the game – Health pegs when taking or healing damage, Skill pegs when using Skills, and Ammo pegs when firing or reloading a ranged weapon.

This is sci-fi; we have to be prepared for the future, right? These boards do everything we wanted them to and more, but we’ve still got more ideas. What if in the future we wanted to make some more powerful alien races, or put a character in an exo-suit? It would make sense that they could have more health, or carry more items. 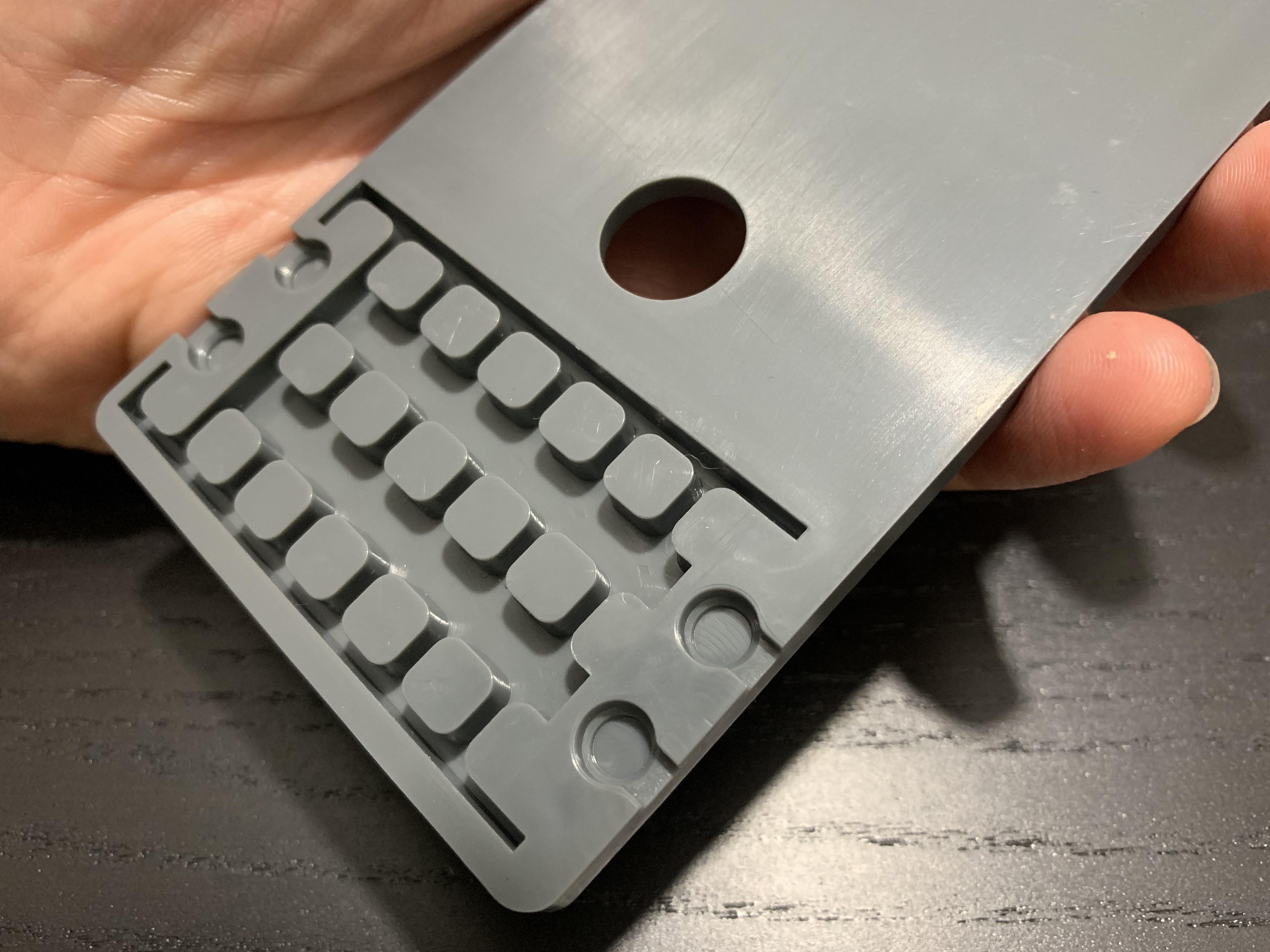 Well, as and when this comes to pass, we’ve thought ahead. On the back of the dashboards you will see some sockets on each side. These will allow us to clip expansion sections to the sides of the dashboards to do fancy new things. Cool, eh?

That’s about it for our overview of dashboards. Don’t forget that the core rules of Core Space are available for free on the website, so you can download them if you want to find out more – just click HERE. 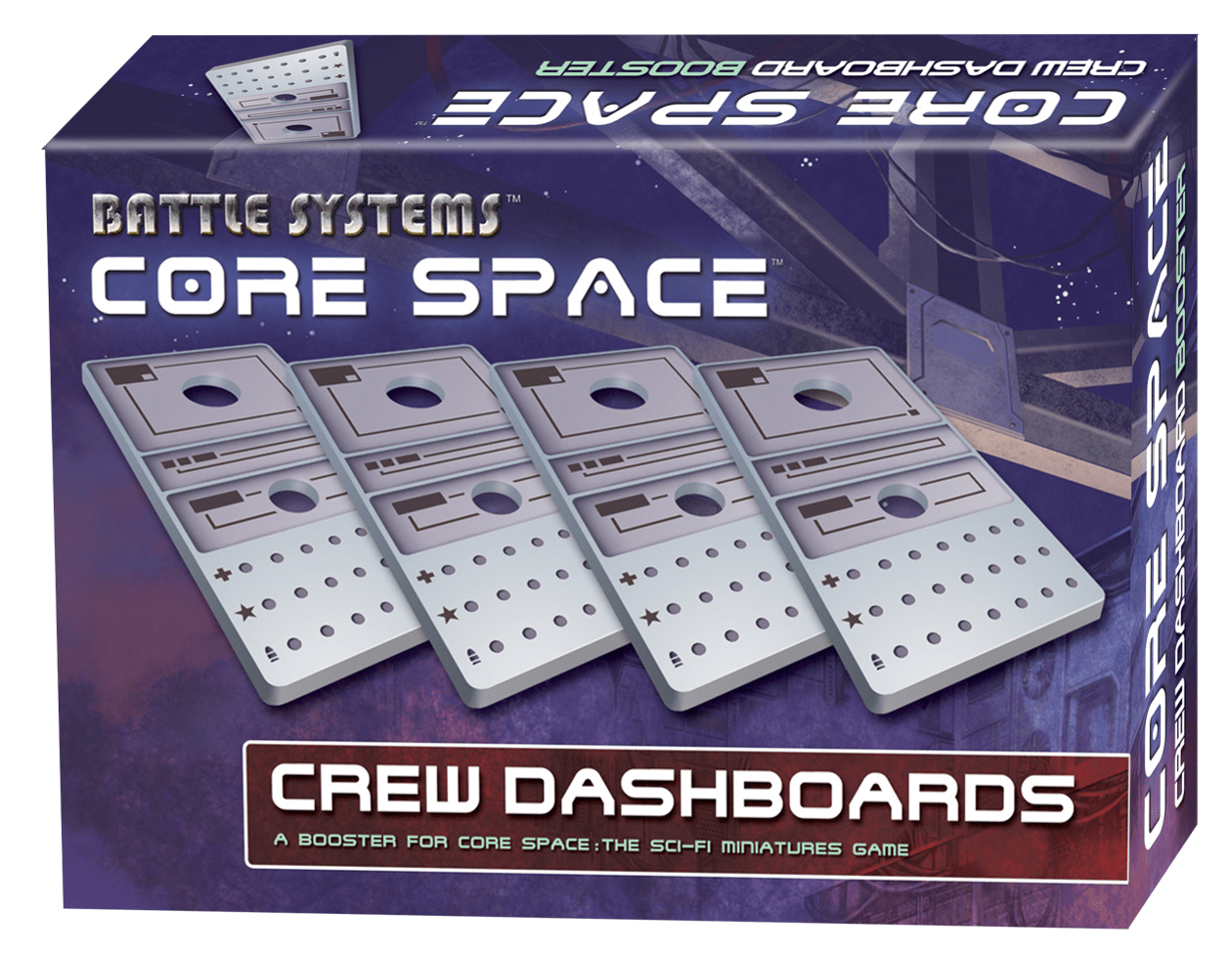 To play the game you will need one dashboard per Trader taking part. You can pick up a set of four, enough for a single crew, HERE. You get all the pegs too, so they’re great value. Of course, you get two complete packs in the Starter Set – as if the game wasn’t insane enough value as it is!

Keep up with the latest news by signing up to our newsletter HERE.