The galaxy is fast heading for a new dark age. Although dealt a serious blow the Purge are fighting back and they’re winning. Worlds shut their borders, trade routes close and travel between sectors is met with hostility.

The Purge are virtually unchallenged and are sweeping through sector after sector. In these desperate times the Traders are forced to take more dangerous jobs for less gain.

Life is hard but so are the Traders; this is where they are at their best, fighting impossible odds and scraping a living. In a galaxy where the authorities are ignoring the real dangers and the soldiers stand by idle a new type of hero is needed.

Maybe you are that hero…

Dangerous Days is a brand new supplement for Core Space, available in May 2020. It is up for pre-order on our website right now. Read on to find out more. 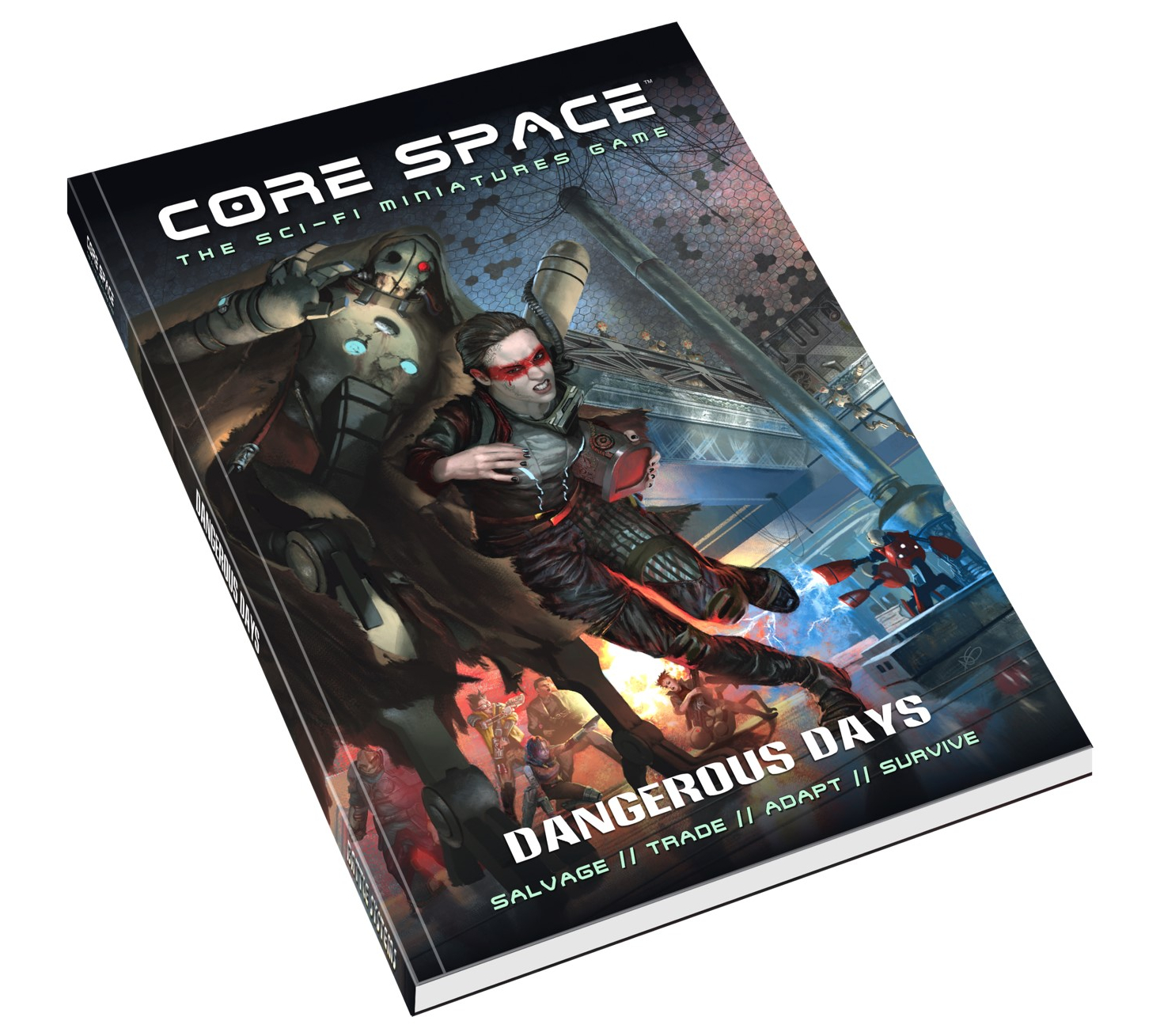 Dangerous Days has something for everyone. It expands Core Space’s sandbox experience, adding whole new layers to the game. Up the difficulty of your campaigns, interact with a wider range of terrain, and play through the epic new Dangerous Days narrative.

Here’s what you’ll find inside:

Everything you’ve played so far was running on Easy Mode. The new campaign rules will up the difficulty and address the balance for experienced players who may have become a bit too efficient at looting everything the Purge left in their wake. You’ll be forced to make more difficult decisions about what you can afford to leave behind. These rules can be used for all games, including the Perseus Arm campaign. 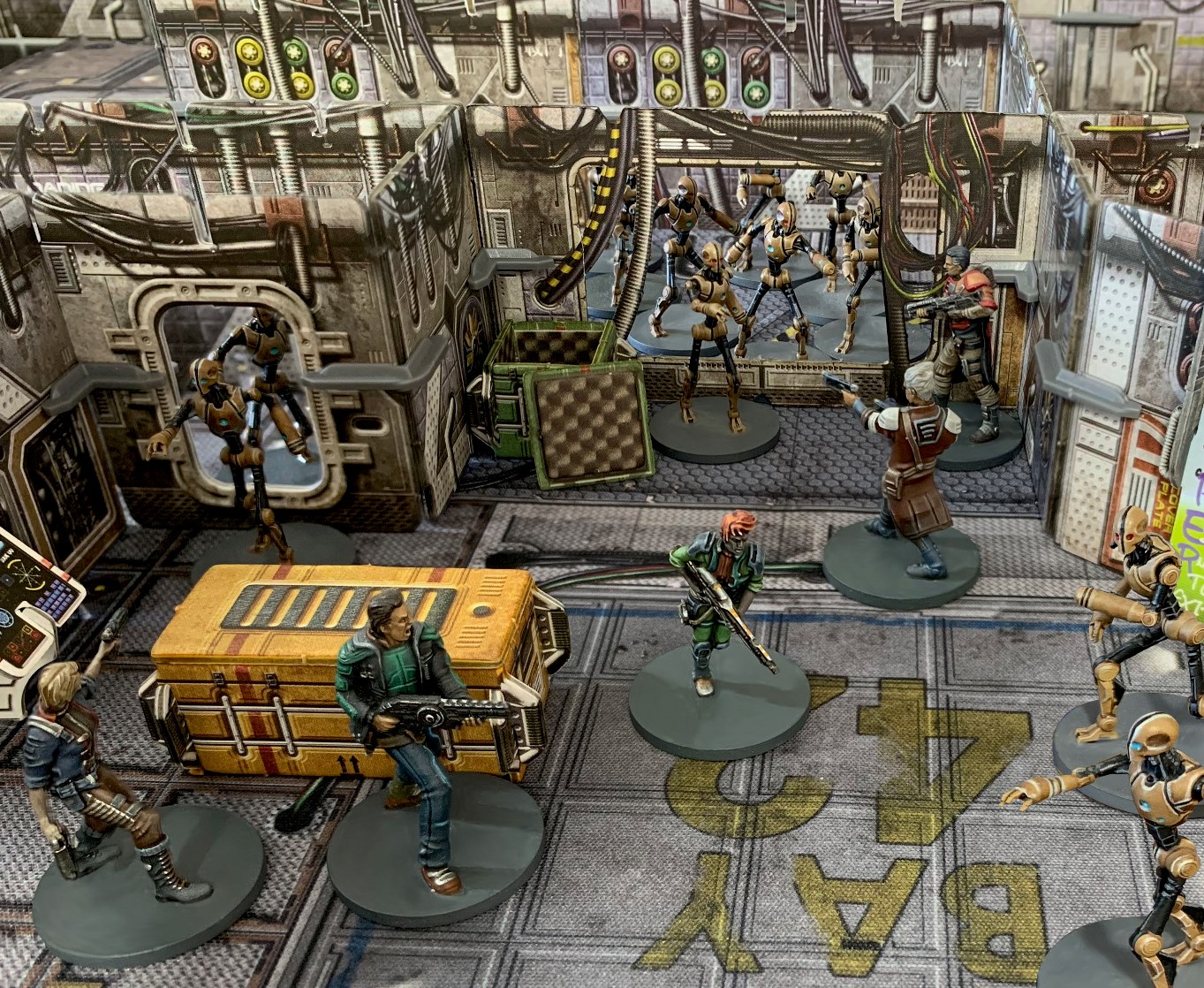 For example, if the Purge are the Core Space equivalent of COVID-19, Ship Parts have become the equivalent of toilet roll and hand sanitiser! You’ll have to pay inflated prices and visit specialist stores if you want to keep your ship running. Ship Parts found on-mission have suddenly become much more valuable…

You’ll also see an overhaul to the way that Career Points are gained. For a veteran crew, just surviving is no longer enough. You’ll need to go above and beyond if you want to learn new skills in this new, more dangerous galaxy.

That’s just a couple of examples – the book also includes rules for crew upkeep costs, post-game Purge attacks, computer hacking, alien infestations, new nano-equipment, and more. The Anarchy in the Galaxy rules even allow you to swap out the Purge and use criminal Gangers as the main enemy in your games. They may be weaker individually, but you’ll be using the NPC side of every character board you own for countless nameless henchmen to defeat. 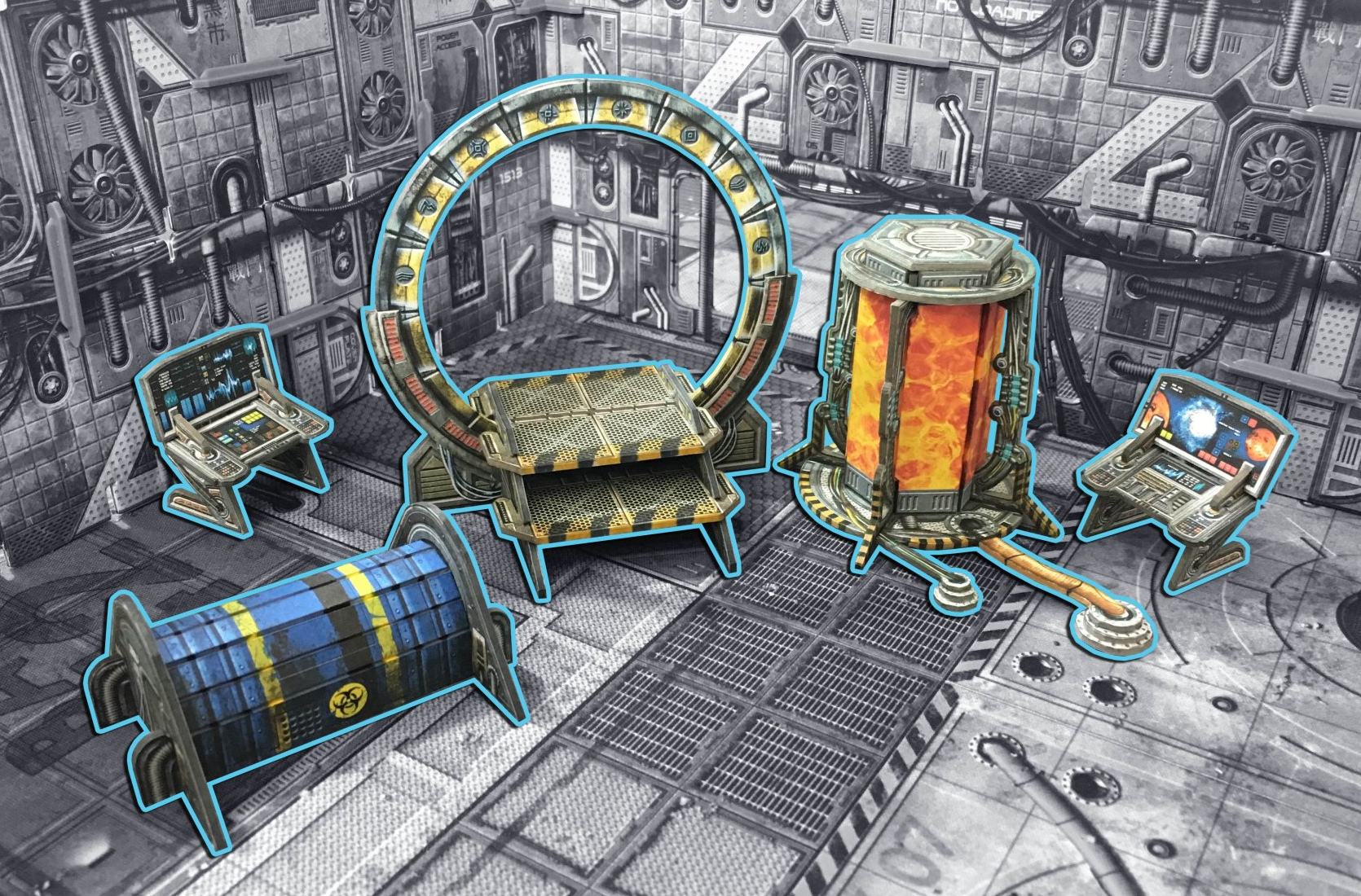 If that wasn’t enough, there are also rules for other terrain types. Want to add a dimension gate to your game, or destroy items of cover mid-firefight? We’ve got you covered (or not if you’re not careful!)

Alongside Dangerous Days we will be launching two new expansions for Core Space – “Shift Change at MegaCorp” and “Rogue Purge”. We’ve got in-depth blogs about them HERE and HERE. 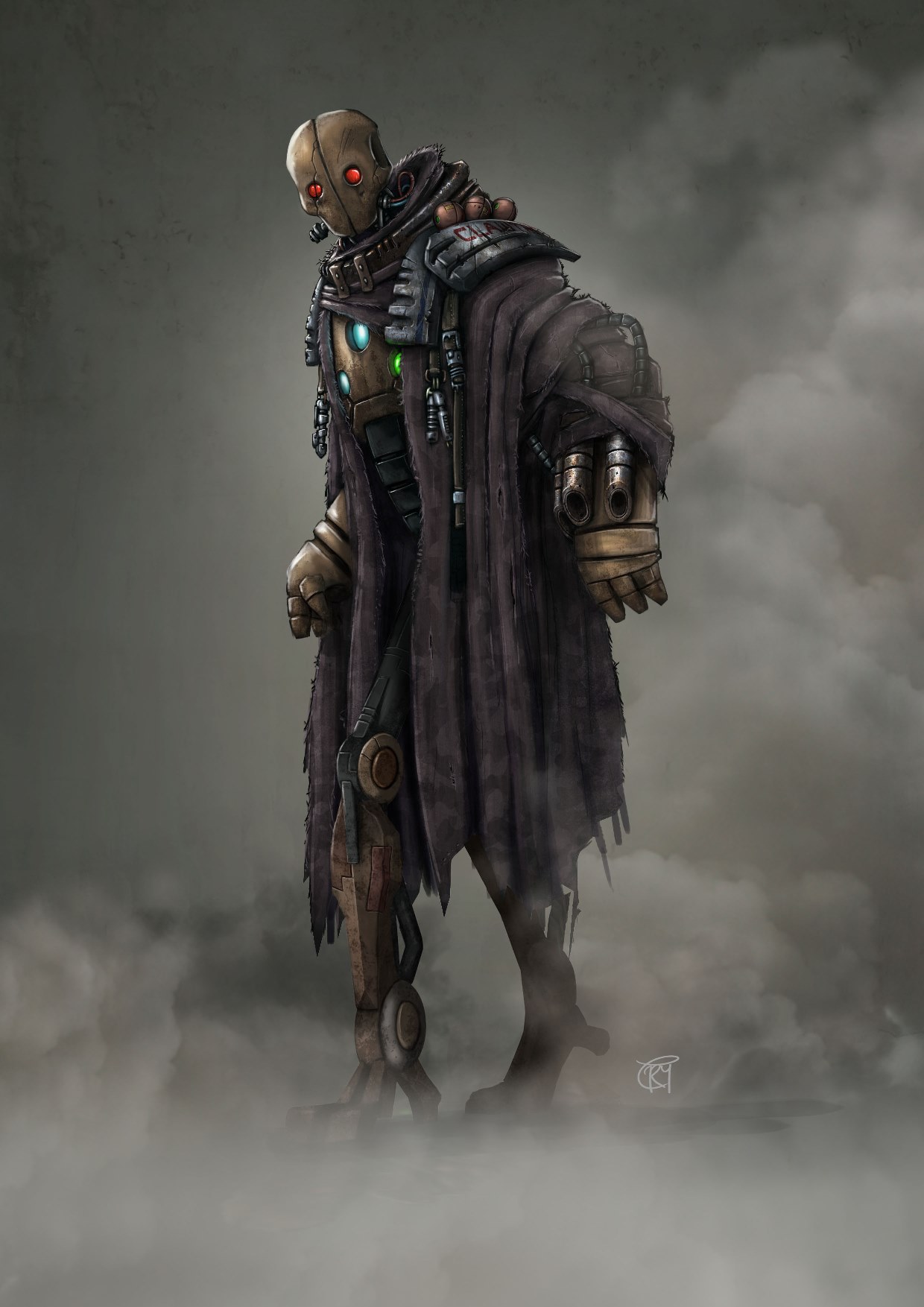 To avoid you carrying around lots of books, we’ve used a few pages of Dangerous Days book to print the new NPC rules (which will also be found in their respective sets) so you’ll have everything in one place.

Dangerous Days includes a total of 24 new missions, doubling the total of printed Core Space missions to 48! That should be enough to keep everyone going through the lockdown and beyond.

First up there’s an 8-mission narrative campaign to follow up the Perseus Arm story from the starter set. You’ll have to battle your way through the tough new galactic conditions while dealing with corrupt corporations, alien infestations, and working both for and against the Galactic Corps! Unlike the starter set campaign this one is for 1-4 players, and as the campaign progresses it incorporates other Core Space sets so you can experience all the game has to offer. 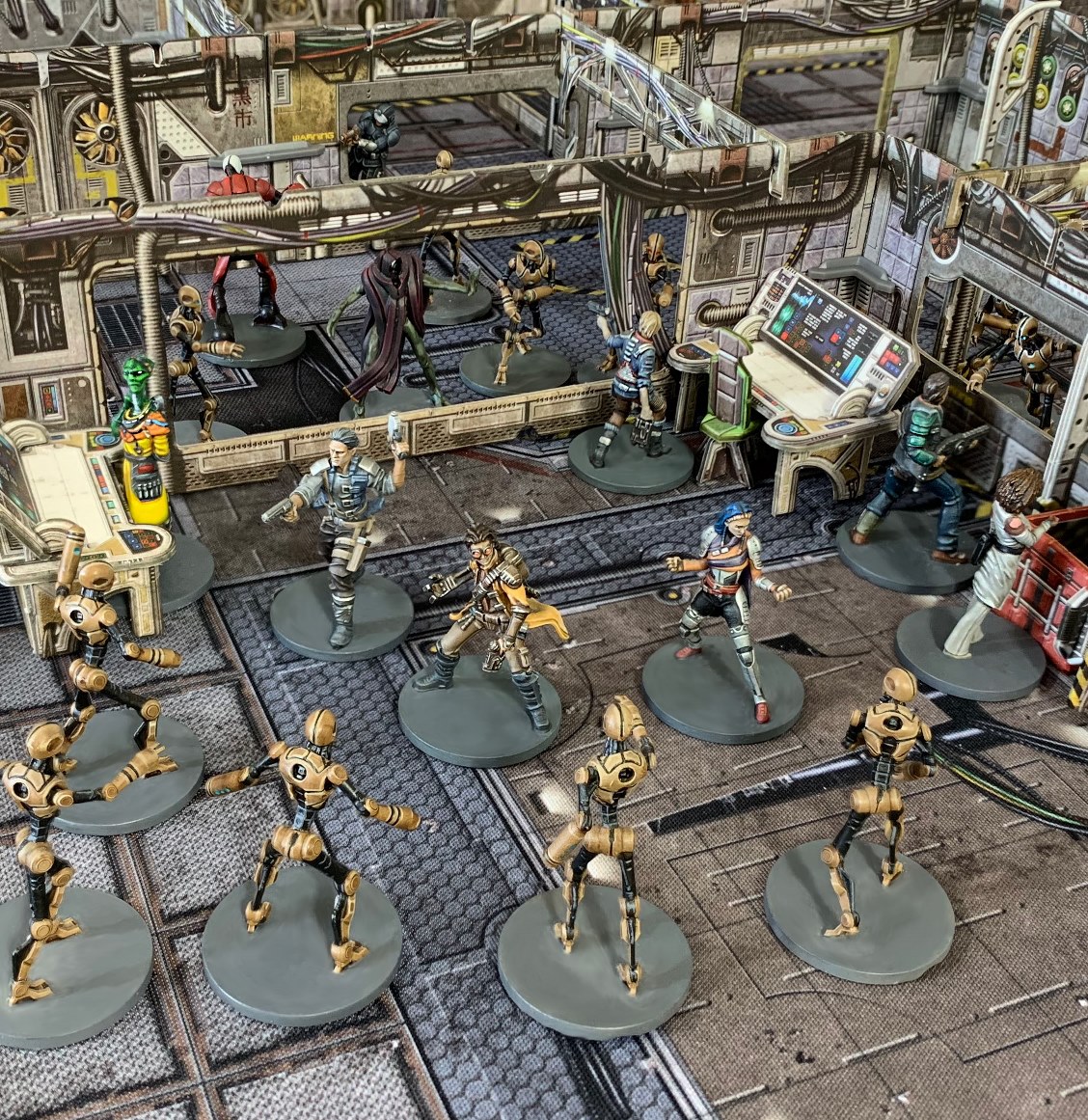 The campaign is followed up with all of the Monday Missions to date. This is the first time these have been printed and they are all in one place for your convenience, with a few minor updates to allow for the new Dangerous Days rules. There’s something for everyone – solo missions, multiplayer missions, big missions, small missions, some that use just the starter set content and some that use other terrain and expansions. No matter your preference, you’ll find plenty of added replayability in this section!

The 96-page book also includes a detailed painting guide from Scott at Deathstroke Miniature Painting Studio (he painted lots of our studio minis). Learn to paint Purge, Traders of all different kinds, glowing visors and even NMM!

We finish everything off with a comprehensive FAQ (also available online HERE) covering updates and clarifications to the core set. For example, we’ve taken an in-depth look at commonly misunderstood rules such as how to fill the crates before a game. We’ve also rebalanced a few areas of the rules to ensure that your campaigns remain a challenge from start to finish. Docking Thrusters are now more limited in their use, and Data Credits are now more valuable (especially as you’ll have more to spend them on with the new campaign rules!).

At the back of the book there’s even a reference section – two complete new skill tables that can be used for custom characters, along with all the icons from the new and updated weaponry.

Dangerous Days is an awesome new resource for all Core Space players, and a must-buy for anyone looking to continue their campaigns throughout 2020 and beyond. It’s not the end of Core Space either – we will continue releasing downloadable missions throughout the year, and hope for books like this to become an annual event. Look out for the next one in 2021, but we may have some big things coming for Core Space even sooner than that too…