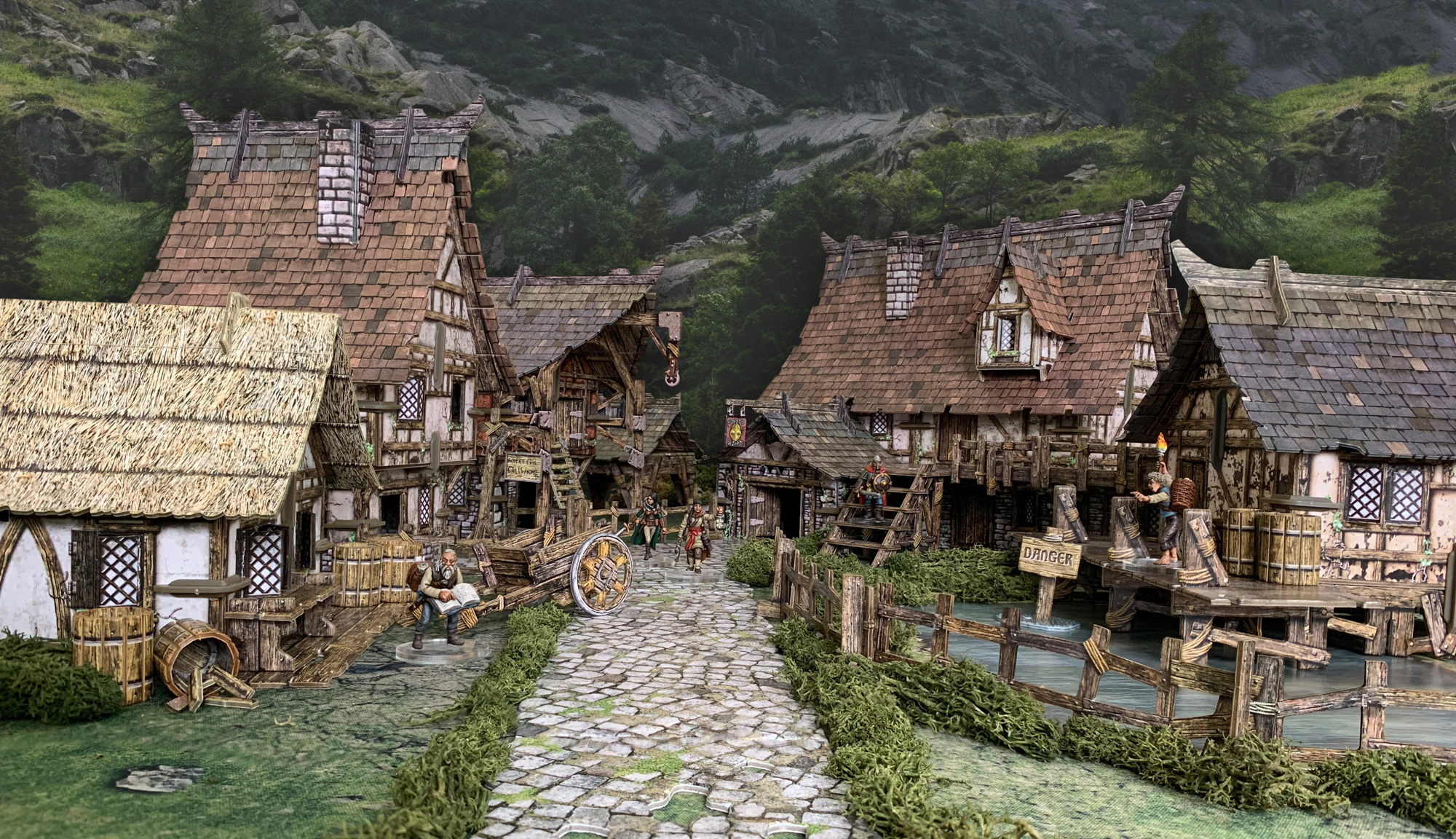 The wait is nearly over. Whether you backed our Fantasy Terrain Kickstarter or your’re intending to pick it up at retail, it will be making its way to your homes in July. The first container has arrived, and shipping is about to begin!

Once the Kickstarter is fulfilled we will move onto website and retailer pre-orders, broken down over three months from July to September. Talking of which, the first pre-orders are now live! Head over to our webstore or to your favourite stockist to pick them up.

If you want to be notified when the August and September pre-orders go live, make sure you are signed up to our newsletter. Sign up HERE.

We are currently working on all the assembly tutorials and more pretty pictures which will go live on the site in early July. They will also be a big feature on our brand new site coming a little later in the summer!

Kicking off the range in July is the Village. The buildings have fully detailed interiors and removable roofs, and the set comes with plenty of scatter terrain and accessories. We’re really proud of how we’ve incorporated curves and rustic designs into the card terrain for a fantasy look.

Each month of releases also includes supporting products. Alongside the Village we’ll be launching the Village Ruins, ideal for Mordheim-style tables. They can be built as a standalone set as shown or combined with a core set for a complete ruined town.

Also released in July is the Battlefield. This is designed for players of big wargames – Kings of War, Song of Ice and Fire, Age of Sigmar etc. The watchtower, roads, rivers and assorted barricades are staples of any gaming table while the modular ruins are suited for filling a large area.

Heading up the August releases is the Citadel. This is similar to the old Warhammer Fortress in size, with four 12″ / 30cm wall sections and four towers. Like all our sets, the interiors are detailed and accessible and you’ll also get a market, gallows and stocks to fill out your courtyard.

The perfect centrepiece for a gaming table or the final battle of an RPG campaign, the Wizard’s Tower will be released in August. It stands an incredible 16″ / 41cm tall and includes over 100 accessories and pieces of arcane furniture!

In September we’re launching the Northern Settlement as our fourth core set. This was NOT available on Kickstarter and is going straight to retail! This Rohan/Norse/Skyrim style set includes a large Mead Hall, a Stable Block and plenty of palisade walls and smaller buildings.

The above are just the highlights. The full range includes over 40 products, with the core set contents available separately, more centrepiece buildings like the Chapel and Water Mill, and a selection of premium neoprene gaming mats.

If you’re waiting for a specific product, the full release schedule can be found below:

Updated 24/06/20 – some of the gaming mats have already sold out! We’ve moved them to September instead in time for a restock.