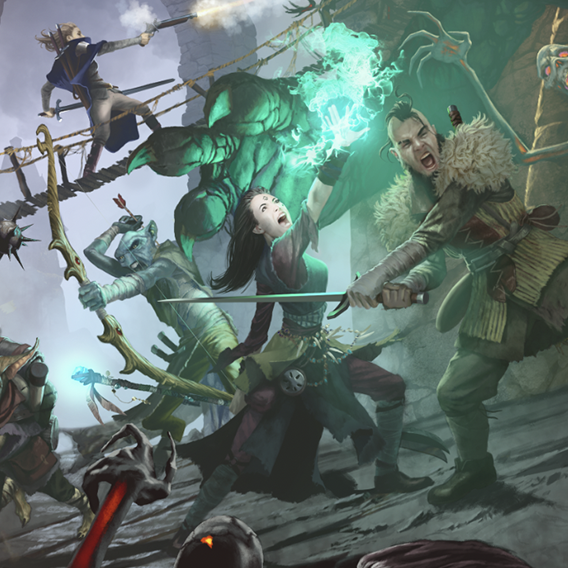 Whether the people of Enveron realise it or not, Maladum (or magic as it is commonly known) is actually the re-emergence of a long dormant technology, allowing the user to manipulate biological nanites in the environment using their will. It is an advanced technology, evolved far past its original purpose, but to a medieval people it is simply magic.

For more on the lore of Maladum, see HERE.

This is a fantasy game, and magic was always going to be at the heart of it. Therefore, before designing a single character or writing a single rule, we wanted to establish how magic worked in our universe, and everything would follow from there.

In common terms Maladum is essentially technomancy – the ability to control these nanites. It was important that magic could have otherworldly effects, going beyond what a regular character could do, but that’s the easy bit and almost goes without saying. It’s just as important to have limits. As we fleshed out the lore, we decided to set a rule that (at least for the earthly beings you’ll encounter for now) magic cannot create energy, only manipulate it. This informed the spells that our characters would have access to in the game, and how they would work.

For example, a maladaar (magic user) cannot create a ball of fire, but they can direct the flames from a nearby source such as a burning brazier (another opportunity for characters to interact with our terrain!). They cannot physically create a wall blocking an enemy’s path, but they can telekinetically assemble loose debris into one. They can’t conjure an illusion in the air, but they can trick another’s mind into believing there is one!

Maladum’s sister game Core Space has a focus on ranged combat, with ammunition being one of the key trackable resources in the game. That is of course far less prevalent in a fantasy setting, but thematically magic fills the same role – it’s a resource used to power a character’s abilities.

The Magic statistic found in the game represents a character’s affinity with the nanites and is tracked using pegs in their character dashboard. Natural maladaar may start with a stat of 3-5 and the potential to max out at 7, but even the most mundane character has some level of magic in their bodies whether they realise it or not! Such characters may think of it as drawing on their inner strength, or even just consider themselves lucky! As magic is such a big part of the game, it was important for us to give almost all characters at least some access to it.

Also just like expending ammo in Core Space, using magic draws attention, so the first Magic peg spent each round is added to the Dread tracker, increasing the danger of upcoming event cards and attracting enemies.

Manipulating the nanites flowing through your veins requires a huge amount of willpower and focus, and in the heat of battle those can be hard to come by! The Magic Die represents how much control a character has over their powers at a particular time.

Whenever an Adventurer would spend Magic pegs, whether casting a spell, resisting a spell or using a magical item, the Magic Die must be rolled.

On a 6, the effect is unstoppable and is resolved as if an extra peg had been spent.

On a 1, the character suffers a mental overload – the effect does not resolve, any pegs spent are wasted, and the character becomes Fatigued (a status effect that forces a character to lose an action in their next turn).

In between, the effects vary from restoring spent magic pegs, to an aura restoring pegs to nearby friends, to a magical blast that knocks characters to their feet.

These effects are random, and can seem harsh, but they fittingly represent the difficulties of a novice maladaar learning a dangerous craft. As characters become more experienced they will have plenty of ways in which to mitigate these results. More on that a bit later.

There are three main ‘schools’ of Maladum, largely broken down by the nature of the nanites the user can manipulate. Proximate magic is used to manipulate a maladaar’s own body; Vicarious magic affects the minds and bodies of others, while Elemental magic affects inanimate objects and the surrounding environment. More information can be found in our previous article HERE.

Within these schools, each spell has very simple rules that are usually resolved by the character spending an action. There are over 50 spells in the game with a huge range of effects, broken down into five levels based on their power and difficulty to cast. No matter what kind of wizard you want to be, we’ll have something for you! Here are some examples:

Note: Rest is a new action that allows characters to regain health and magic pegs and discard status effects – the Cocoon spell creates a bubble around the character allowing them to gain these benefits even in the heat of battle!

There is no limit to the number of spells that can be cast per turn, round or game, as long as the caster has actions and pegs available to spend. Again, at higher levels characters will often be able to manipulate even these limits!

To cast a spell, a character simply uses the required action and spends a number of Magic pegs, often represented by a casting value of X as you’ll see above. The caster chooses how much power to use, affecting the spell’s result. Casting Cocoon on yourself is relatively easy, but protecting nearby friends will require more power.

A spell’s casting level is limited by the character’s rank. A novice character at rank 1 will usually only be able to cast spells of up to level 1, and can only spend a single peg to cast it. A rank 4 maladaar on the other hand can cast spells they have learned at up to level 4, and using up to four pegs at once. Unstoppable results on the Magic Die can enhance spells beyond a caster’s level – an unstoppable spell cast with four pegs would have the effect of casting it with five!

This won’t come up much in co-op or solo games, but if you choose to play PvP and you target other Adventurers or NPCs with magic pegs, they can attempt to resist spells cast on them. They can spend any number of pegs up to their rank, reducing the casting value of the spell for each peg before its effects are resolved.

Event cards representing spells cast by your AI adversaries can also be resisted by your characters in this way.

The spells a character can learn are based on the Class (profession) chosen for them. We currently have seven different maladaar classes with a varying number of spells available. Some classes are more generalists; some more specialised.

For example, the Magus is a powerful warrior in their own right, using their magic to enhanceand complement their combat abilities. The Prymorist specialises in Elemental magic, manipulating their environment to support the party from afar in a variety of ways. The Rook is a master of Vicarious spells and can cause serious damage, but lacks protective abilities and must be guarded by their comrades. Minor maladaar classes such as the Paladin are primarily combatants but have a limited repertoire of supportive magic.

Once a Class is chosen, characters may assign Experience earned by completing quests to learn new spells, of a level up to their current rank. They can of course also assign their experience to Skills just like non-maladaar.

Even some non-maladaar classes have access to specific spells – the Rogue can use their knowledge of Maladum to manipulate locks, and even Barbarians can draw on innate power for a flurry of powerful blows.

Weapons and equipment can be imbued with nanites that can be harnessed by a skilled Adventurer, maladaar or otherwise.

Some items grant a character a magic-related ability or Skill, while others have ‘channelled’ abilities, requiring the user to tune their Maladum with the item, spending pegs when the items are used to unlock their powers.

Some of the most powerful equipment has the full force of a spell trapped inside, ready to be released. A spell trapped in one of these items can be used as if the character knew it themselves.

Some spells and items create a magical forcefield around a character, protecting them from harm. Activating such armour requires the user to spend any number of pegs to gain a matching armour value, then used to deflect hits just like physical armour.

When a character takes hits, they can spend further pegs to boost their armour’s value, blocking even the most powerful attacks while they have energy remaining.

However, if magical armour is beaten and a character is Stunned or takes damage, the armour is lost until the spell can be cast again. In addition, magical armour values higher than 1 require the user to spend pegs each round to maintain them, so it will take a huge amount of power to hold off an enemy for a long period.

As we’ve shown, as characters progress they will learn more spells and be able to charge those spells with more raw power. However more subtle effects of character and party progression will also give you more control over how and when magic is used.

At a basic level, characters can use low-level, low-risk spells such as Focus and Bless to grant re-rolls. If you can avoid the temptation to use these re-rolls when attacking, you can save them for the Magic Die instead and prevent a mental overload on the more powerful spells.

Skills such as Nanite Mastery allow characters temporary access to any level 1 spell even if they haven’t learned it – sometimes remembering your basic training can get you out of a tight spot! As more experience is assigned to the Skill it also allows a character to regenerate Magic pegs every round for free.

That’s not the only magic-related Skill either – Fortified Mind allows a character to cast a spell while engaged in combat, while Power Manipulation lets you spend your Skill pegs to cast spells, or channel a huge energy burst through a magical weapon.

Unskilled characters can still make use of magical equipment too – potions can restore Magic pegs mid-turn, magic staffs can allow spells to be cast beyond what their rank would allow, and hypnotic amulets can enchant enemies. You’ll find many more mystical artefacts as you explore the dungeon.

Hopefully it’s clear that the magic system in our new game is very large and detailed, but still incredibly simple to use. There is a huge amount of scope in terms of spells, items and skills, but during play you only need to worry about how best to use the ones in front of you. These choices start out small – a novice maladaar will only have access to a handful of spells, and maybe one item or skill if they’re lucky – but even then, the maladaar classes come with a reference card to keep out on the table.

As characters gain experience and new options open up, each game becomes an exciting resource management puzzle. What is the best way to use the magic available for the best possible result?

Maladum should be ready to launch in the next couple of months and then you can decide for yourself. If you have any more questions about how magic will work in the game, ask away in the comments below.