We’re almost there – the sci-fi sets have been manufactured, have passed quality control tests and are now being shipped to the UK on a slow boat from China. They’ll reach our UK distributors in London by the end of July where the sorting and sending will commence. Those who happen to live in the UK should, if there are no hitches, be the proud owners of our sci-fi sets shortly after and worldwide backers will get theirs early to mid-August 🙂

There are so many stages to get the final product out that we’ve chewed our fingers down to nubbins a dozen times over. Just a few more sleepless nights to go (‘will the ship sink?’, ‘will the card get damaged in transit?’, ‘will there be a problem at customs?’,  ‘will there be a problem with distribution?’ etc. basically a Mandelbrott spiral of problems to worry ourselves over. All you guys have to do is wait poised by your letterbox gleefully rubbing your hands 🙂

Anyway, a few weeks ago we proudly showed off our Fantasy Dungeon prototype at the  UK Games Expo  and were asked if it would be multi-level. We ummed and ahhed but mostly said no because a dungeon crawler wouldn’t be multi-level, an answer everyone agreed with. 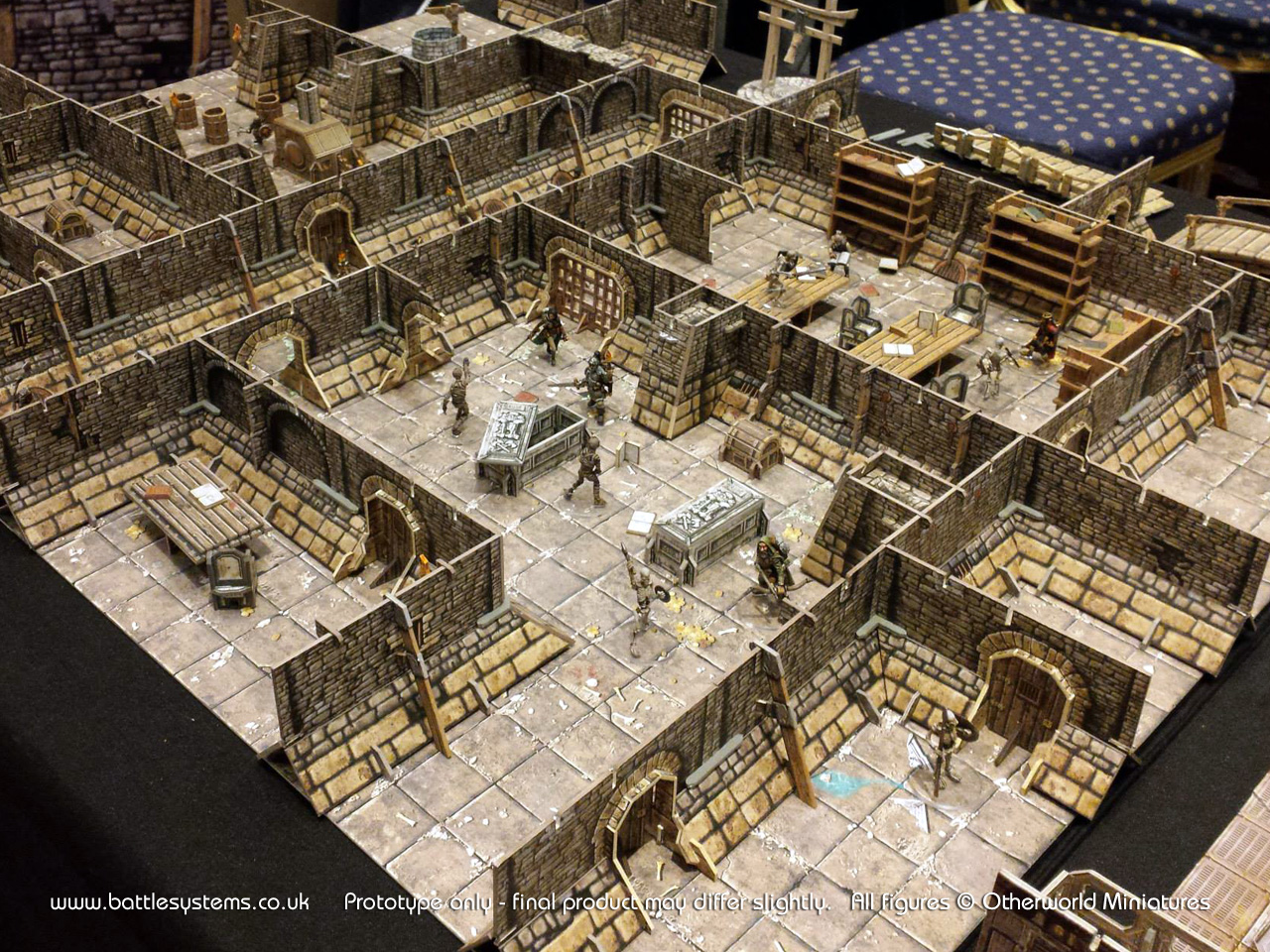 The single level version as seen at the UK Games Expo.

However, we went back home and made an extra level just out of curiousity and it looks amazing 🙂 Here’s a couple of exclusive shots just to get you excited.

The fantasy set with an extra level. Cooler than a polar bear who’s relocated to the south pole. 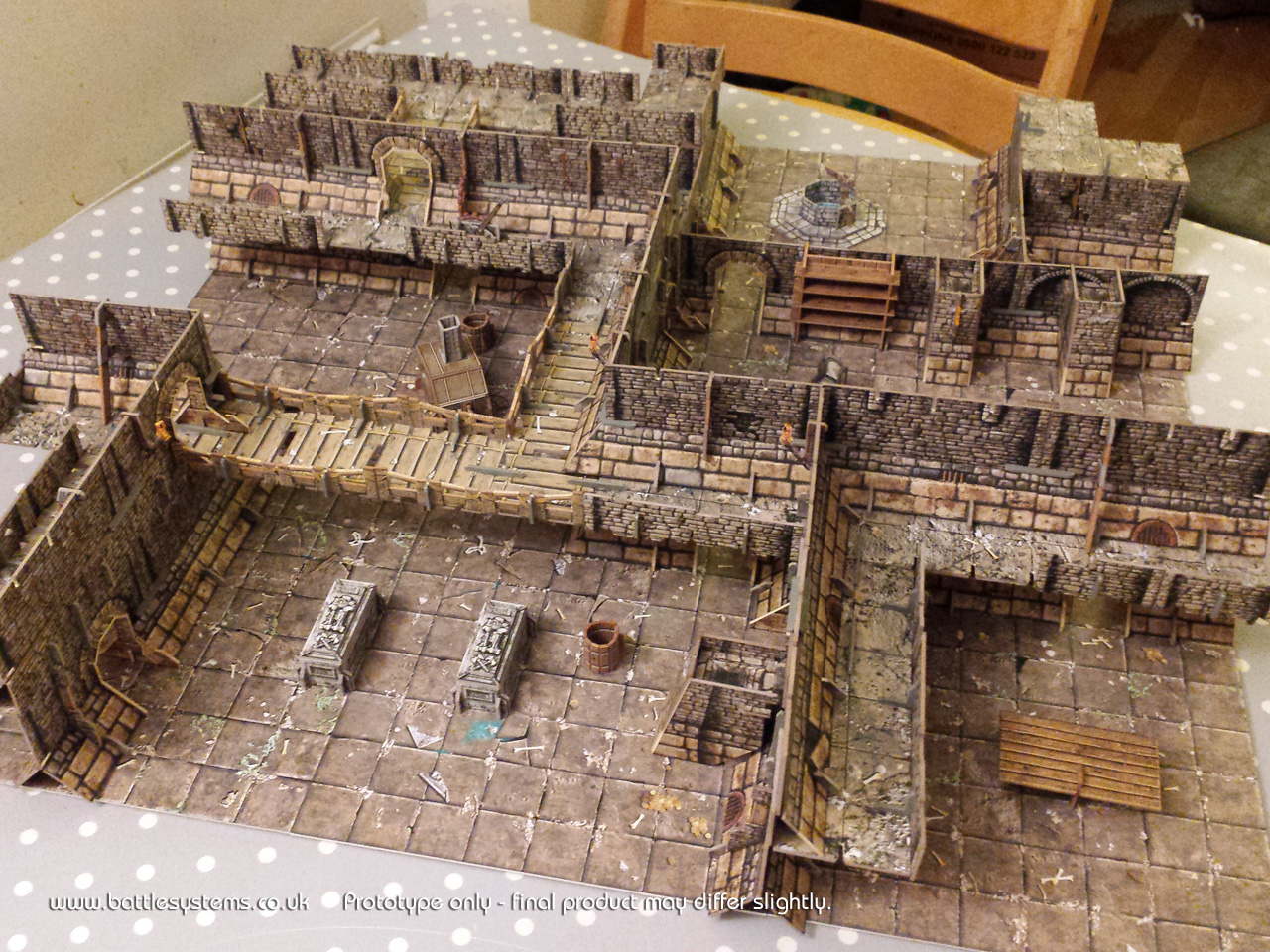 Have another look. Have two looks.

Just pop a few adventurers in there 🙂

We’re both agreed that the fantasy set won’t be a huge multi-leveller like the sci-fi set, rather it’ll have a large base level with an extra level if you want it. We’re also considering replacing the ((CENSORED)) with ((CENSORED)).

We’ve been beavering away trying to anticipate what you’d want from a fantasy set and we’re open to suggestions at this stage so any crazy ideas let’s hear ’em now before the deluge during the Kickstarter! Swamp us here, on our Kickstarter page, our Facebook page or email us direct at info@battlesystems.co.uk

After much deliberation we’ve decided to sell our surplus Kickstarter stock direct from our website. We will do this about a week or so after our backers receive their goods worldwide. Originally we wanted to sell the stock while it was still being shipped so we could use the special shipping rates that our distributors were offering but it was a logistical assault course! The offer will be open to everyone, not just backers so that’s good news for those caught napping during our Kickstarter 🙂

And speaking of napping are you one of the elusive 31? 31 of our backers are blissfully unaware that they won’t be receiving their goods on time because they’ve either forgotten to give their address or have failed to pay for the full shipping costs. We’ve inunduated these snooze hounds with several emails and carrier pigeons but they fail to heed the call! If you find people bragging on forums about their terrain and you’re not one of them chances are you’re one of the 31! Just email us direct at  info@battlesystems.co.uk and we will sort it out 🙂

If you want to stay up to date with our latest developments just click here to subscribe to our newsletter or email us at info@battlesystems.co.uk and type ‘news’ into the subject line.