Shootout at Zed’s is the latest expansion for Core Space, our sci-fi miniatures game, and is released in September 2019. Read on to find out more. 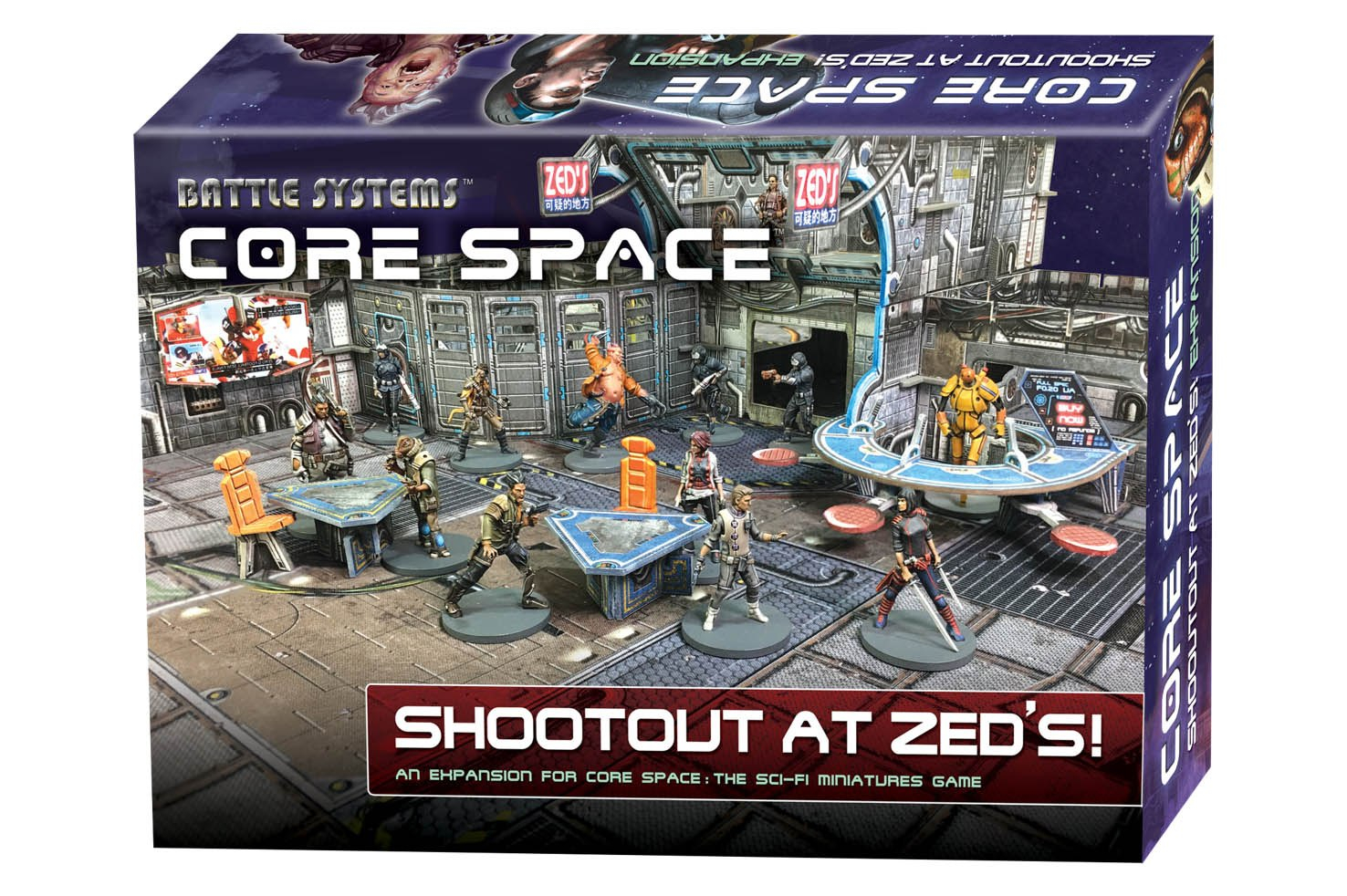 Core Space is pretty open when it comes to gameplay. It can be a tight ‘board’ game sticking strictly to the core rules or using the grid on the floor for movement, or can be a looser dynamic skirmish game that will see you ducking down to the table to check your lines of sight and making the most of your effortless actions to dive for cover. With the advanced rules in place, anything goes – the game is fully customisable and can be played like an RPG, even using a GM if you wish!

My point is that Core Space has lots of moving parts and ways to play. Our Core Space expansions have therefore been structured to add value across the board. You can play Shootout at Zed’s as a standalone campaign, but every component in the box can also be integrated with the starter set to expand your gameplay. 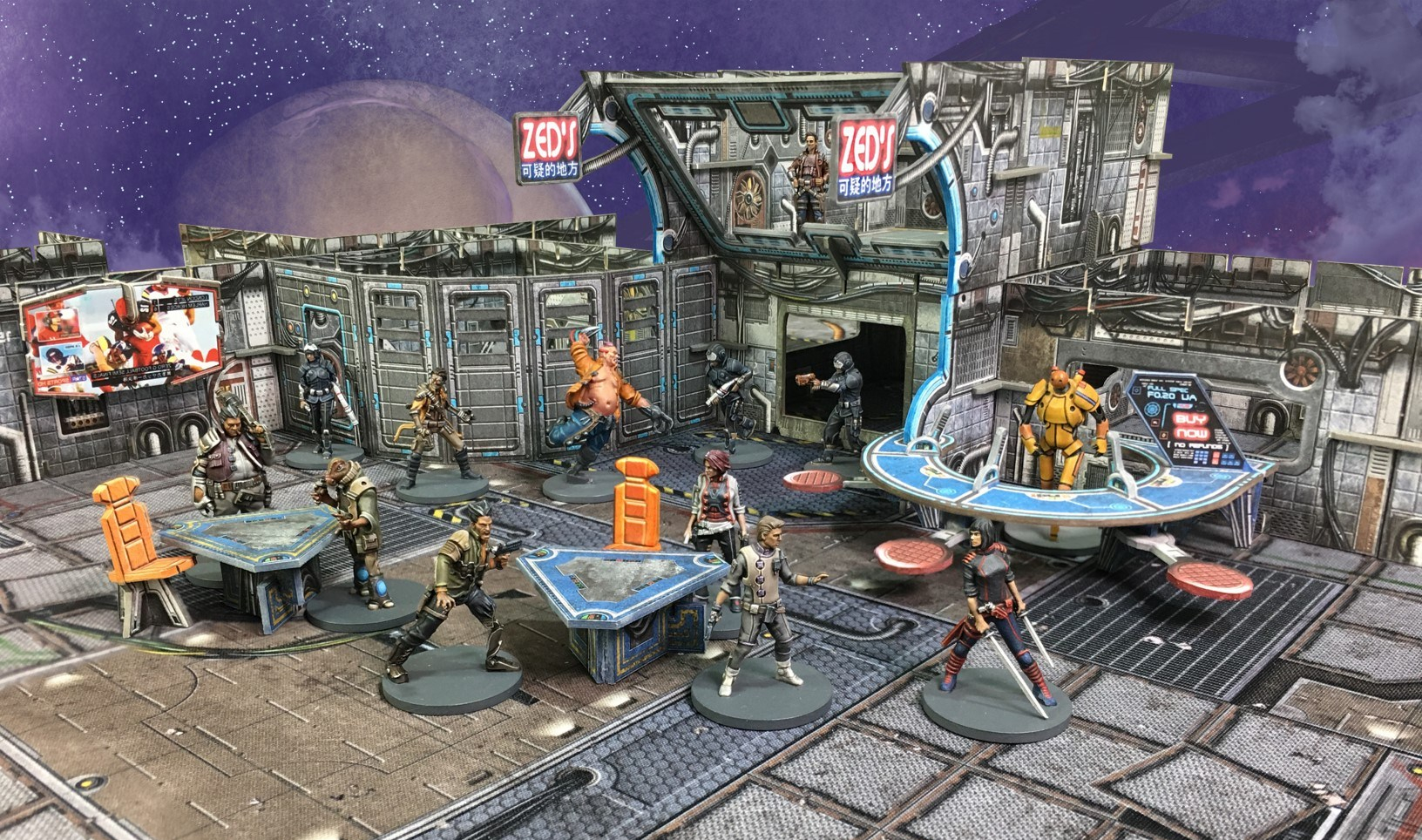 This expansion zooms in on the criminal underworld of the Perseus Arm, focusing on the dastardly Zed and his gang of felons. Gangers are a brand-new NPC controlled by the game’s AI. Like Civilians, Gangers can be useful as a speed bump for the Purge, but unlike Civilians Gangers will attack you too! Let’s find out what you get in the box:

Shootout at Zed’s comes with eight new miniatures; every one of them a unique character. 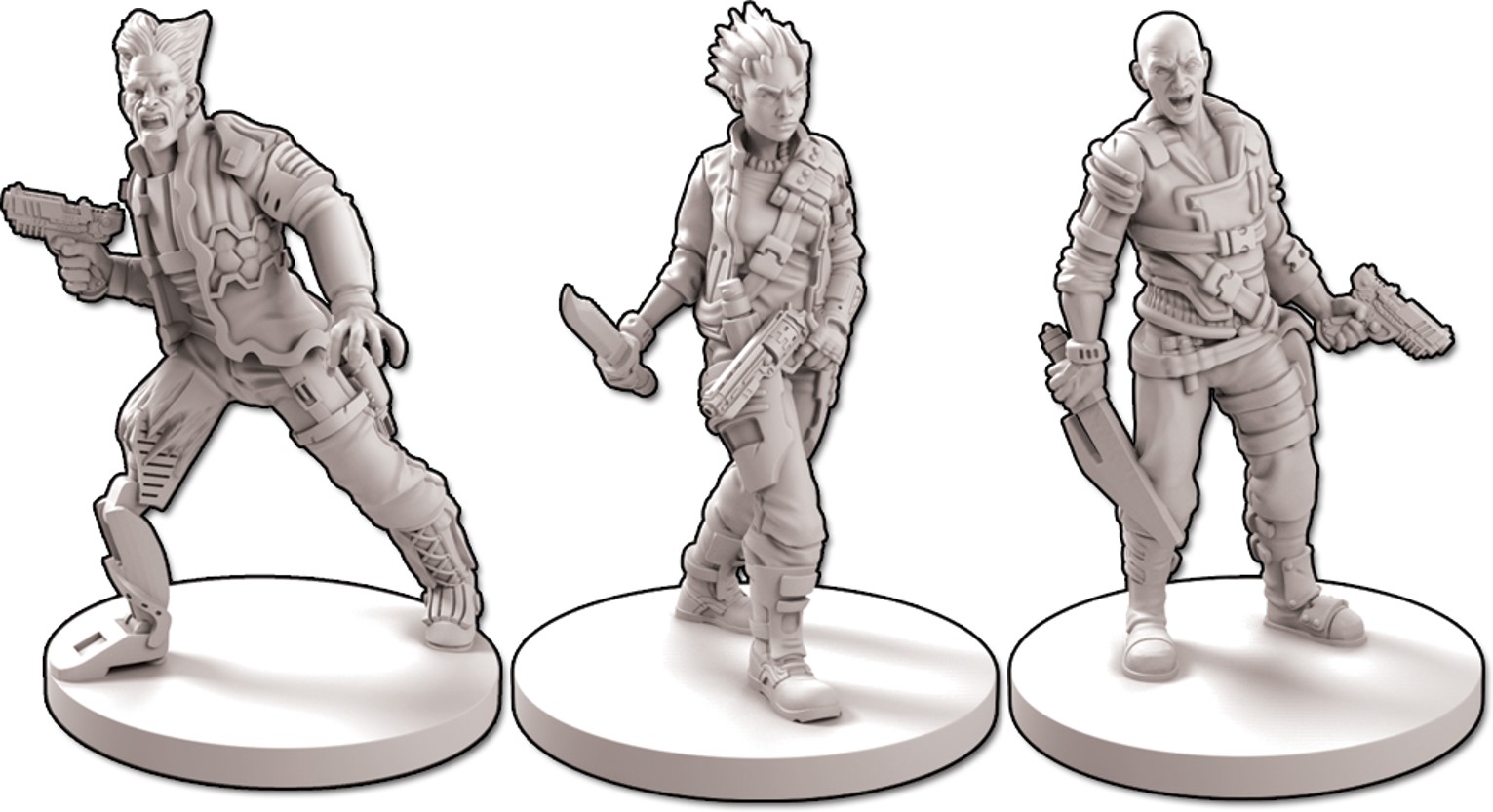 Hobb, Milly and Razor are the lowest of low-lifes, the sadistic criminal henchmen that you must fight your way through to get to the boss. 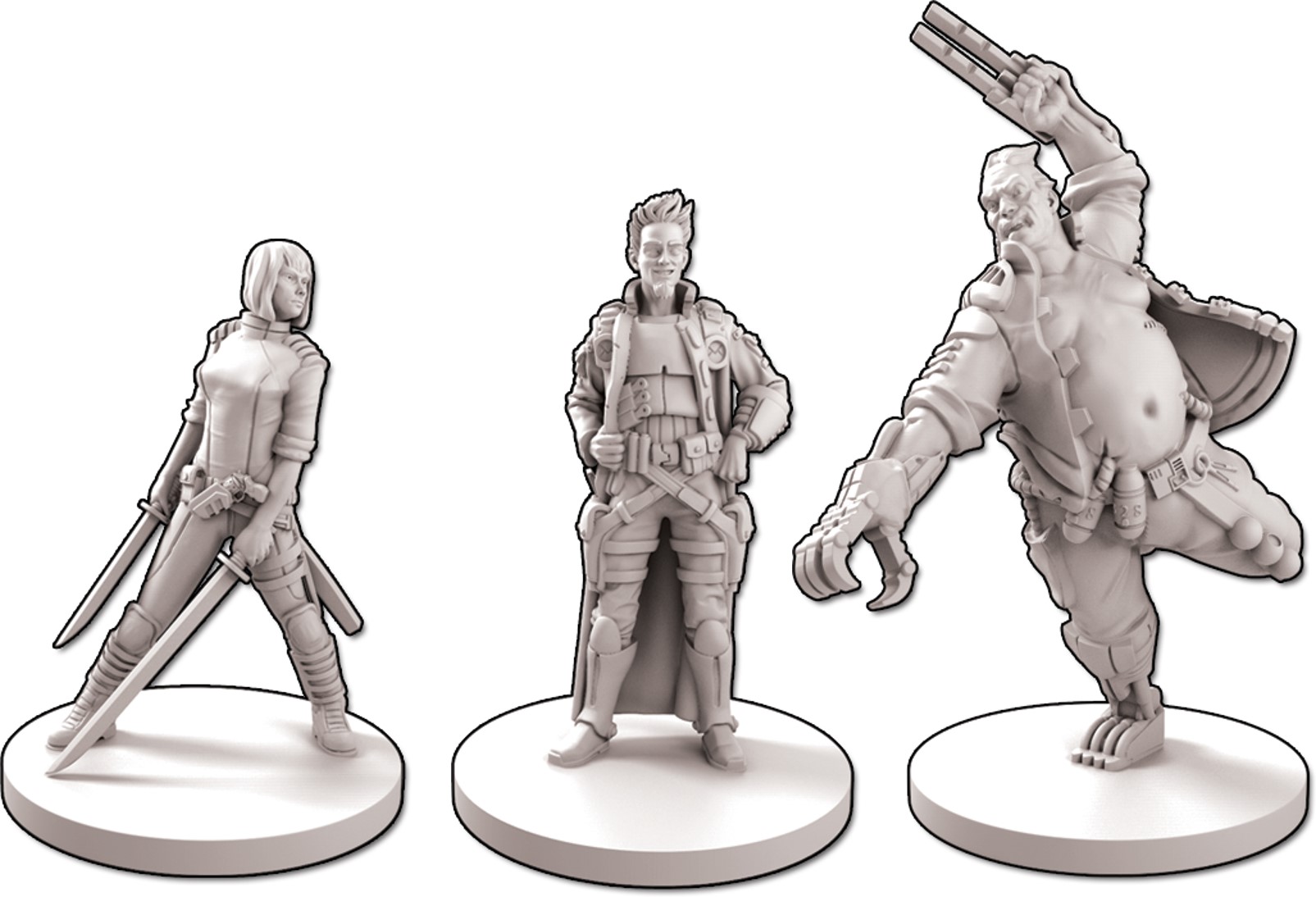 Evangeline and Chunk are Zed’s lieutenants, one an elite hired assassin, the other a drug-fuelled augmented berserker. They are led by Zed himself, a harsh man reminiscent of criminal gang bosses from many films. 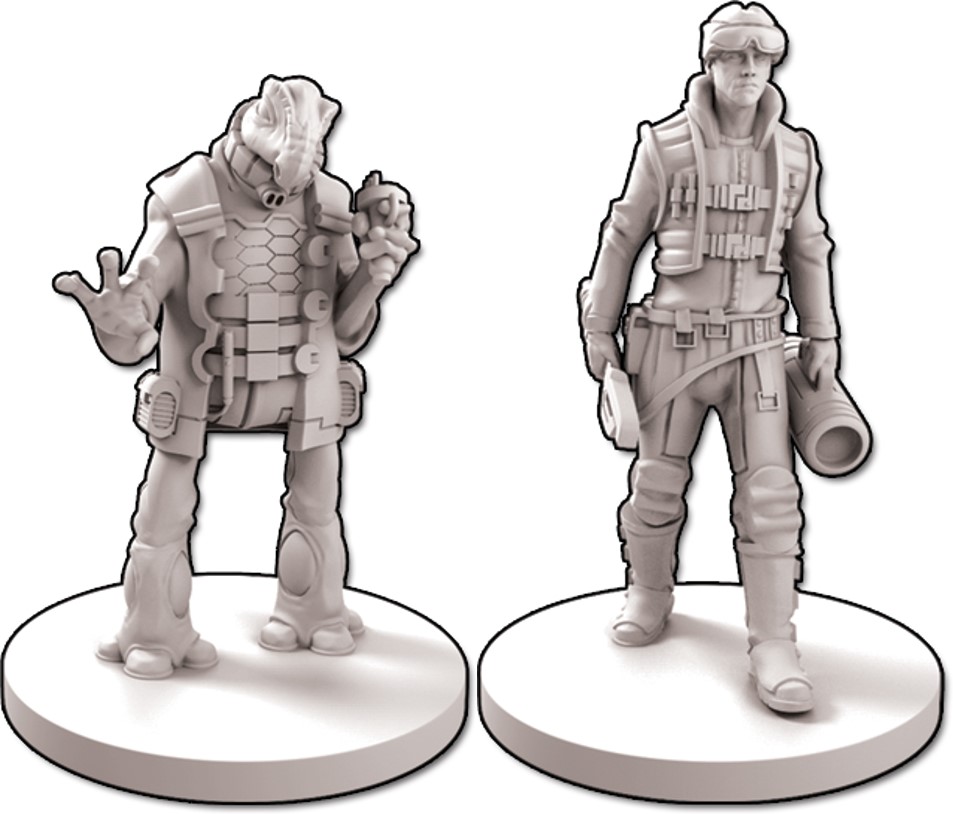 The expansion also comes with two new Civilians, Ooma and Treva, innocent bystanders who live in a rough neighbourhood.

Every character comes with a double-sided character board just like the Traders in the core game and crew boosters. On one side you’ll find their NPC rules, either Ganger or Civilian, and on the other they have full Trader stats.

Note that as fully functioning Traders this means that Zed’s gang can be used as a complete Trader crew if you wish, adding a seventh one to your collection! You’ll get a Ship Board for them in the box in case you want to use them this way. The individual gangers can also be hired to join your other crews.

You’ll also get Class Boards, also double-sided, so you can mix and match roles as you wish. You could hire more augmented crew like Chunk, or you may decide to take Ooma as a Technician.

Like all Core Space characters you will get new equipment tokens too – a total of 22 in the box. This equipment is not specific to the characters and can be mixed in with the tokens from the main game and other Core Space sets for your Traders to find or purchase. 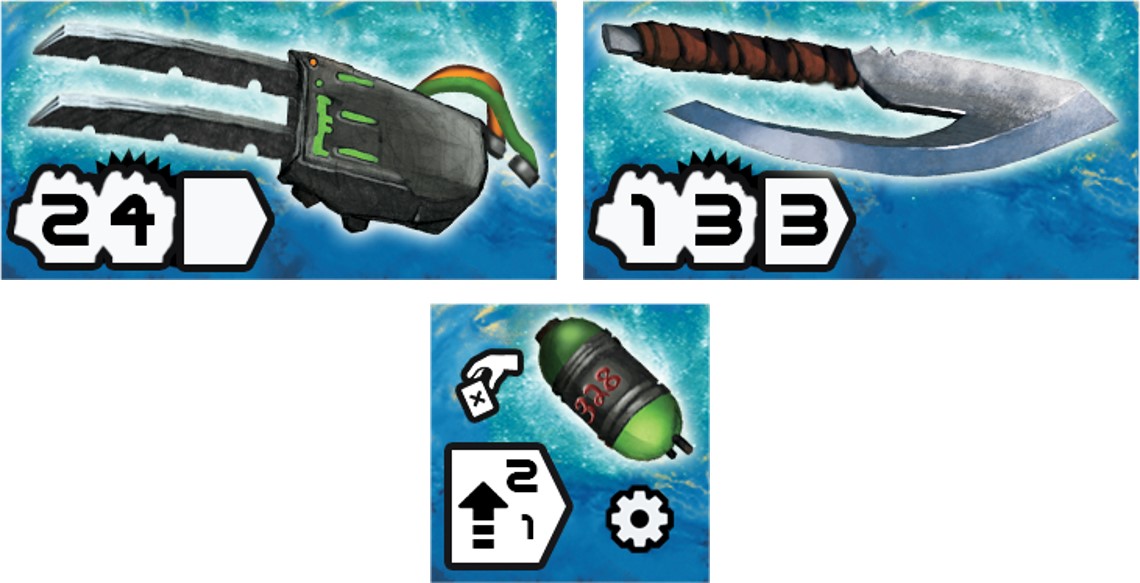 Of particular note are the Power Claw with an incredible four close assault dice – suddenly that Live One doesn’t look so tough! The Outlands Hatchet is a rare item that can also be thrown for three dice in desperate circumstances. The Teleport Grenade can be enormous fun. Anyone hit by it will be randomly teleported a few inches away. Move an opposing Trader away from an item you want to nab, or even use it on your own crew to get them out of a dangerous situation!

The Shootout at Zed’s campaign consists of three exciting new missions for you to play through with your Trader crew that will introduce some new challenges and objectives. All of the missions can be played co-operatively or solo, although you might squabble with the other players over the loot!

This wouldn’t be a Battle Systems product without some new terrain! Zed’s Bar is the first set in the Core Space range with a floor tile and a ladder to give you a second level to your board (which you can of course do with all our other terrain sets).

Even when not playing the Shootout campaign, this is a perfect centrepiece for your board when making your own missions. It is also used in some of our Mission Monday free downloads such as the Titan Accord.

The mezzanine overlooks the main room of the venue, with a bar, TV, partition wall for the VIP area and snazzy entrance struts. Just add the tables and chairs from the starter set and the look is complete.

So, Gangers sound great, don’t they? But what if you want to add them to your regular games, without the narrative of the campaign to drive the story? Well firstly you can use the flipside of your Hostility Tracker – you’ll see a Ganger icon in the Watch Your Back section that will bring them onto the board and cause trouble. 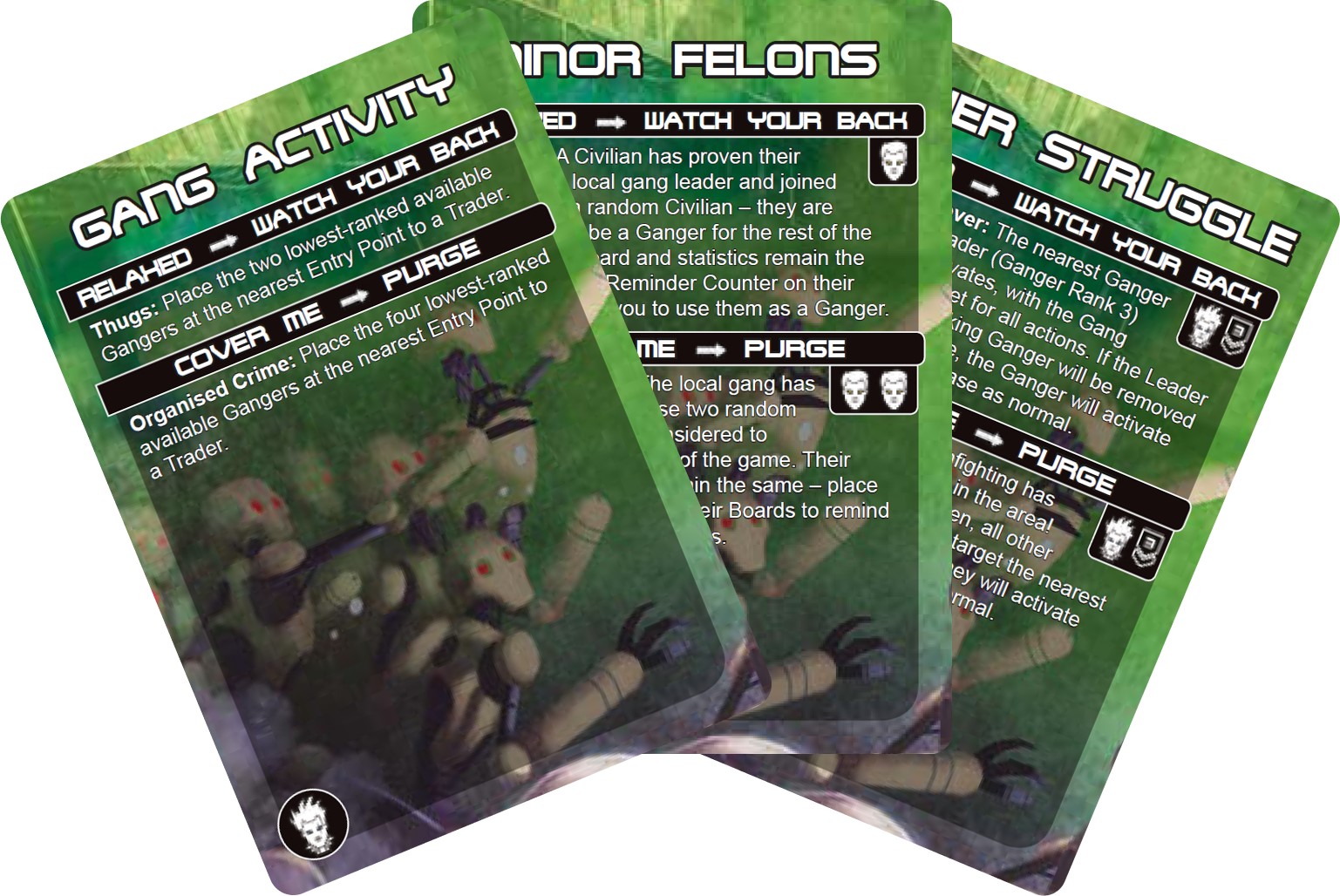 That’s not all though. The final component of the expansion is a set of Event Cards that can be shuffled into your deck when you want to use Gangers. Some cards will bring extra gangers onto the board or give them extra actions and make them more of a threat. Others like Minor Felons will see Civilians joining the gang, and the Power Struggle card will see a turf war break out right in front of you. Better get out of the way! 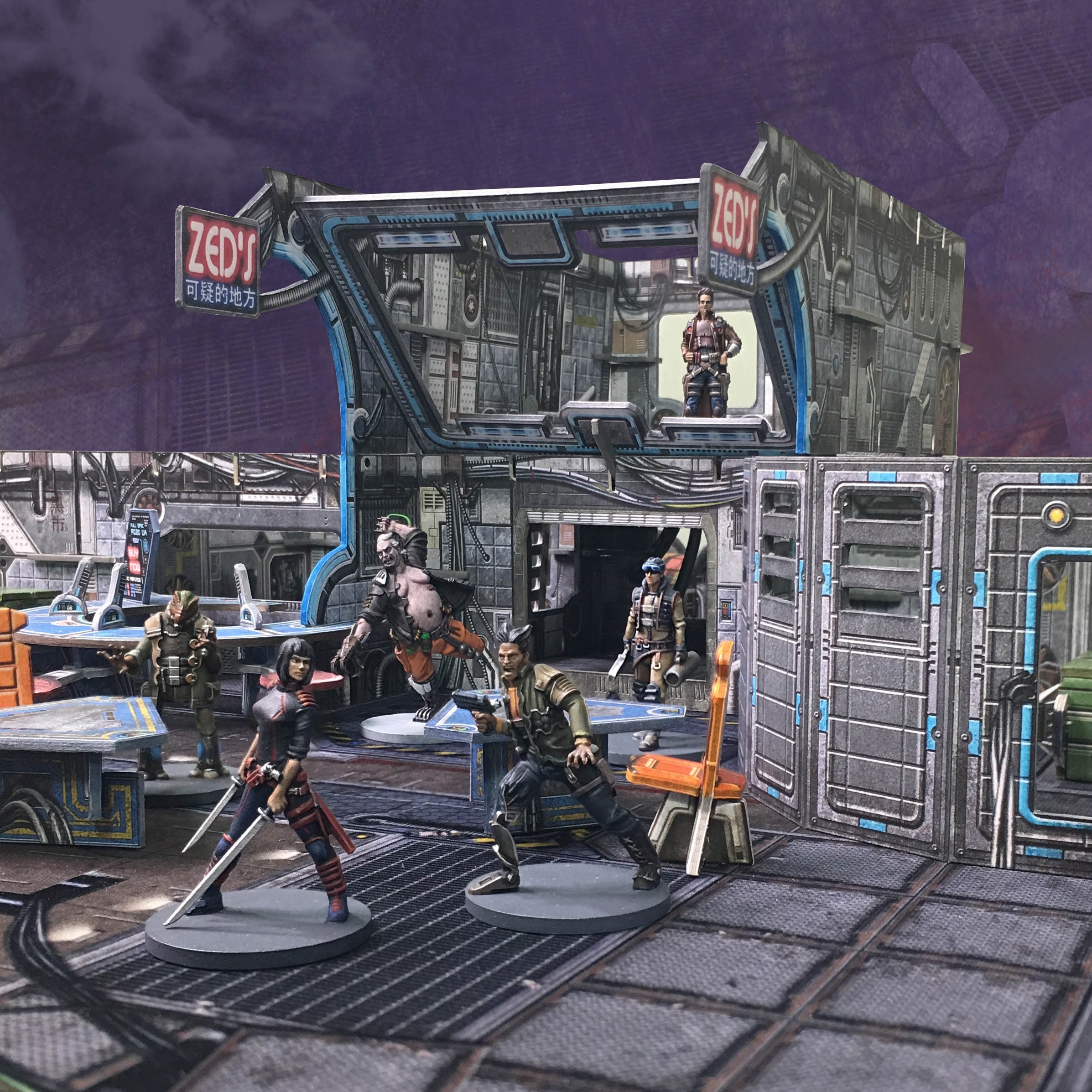 Shootout at Zed’s is released in September and can be ordered from our website HERE or from your local store. If your local store doesn’t stock Battle Systems yet, why not! Ask them to get in touch and we’ll sort them out with some stock including free demo sets to get some gaming going in-store.