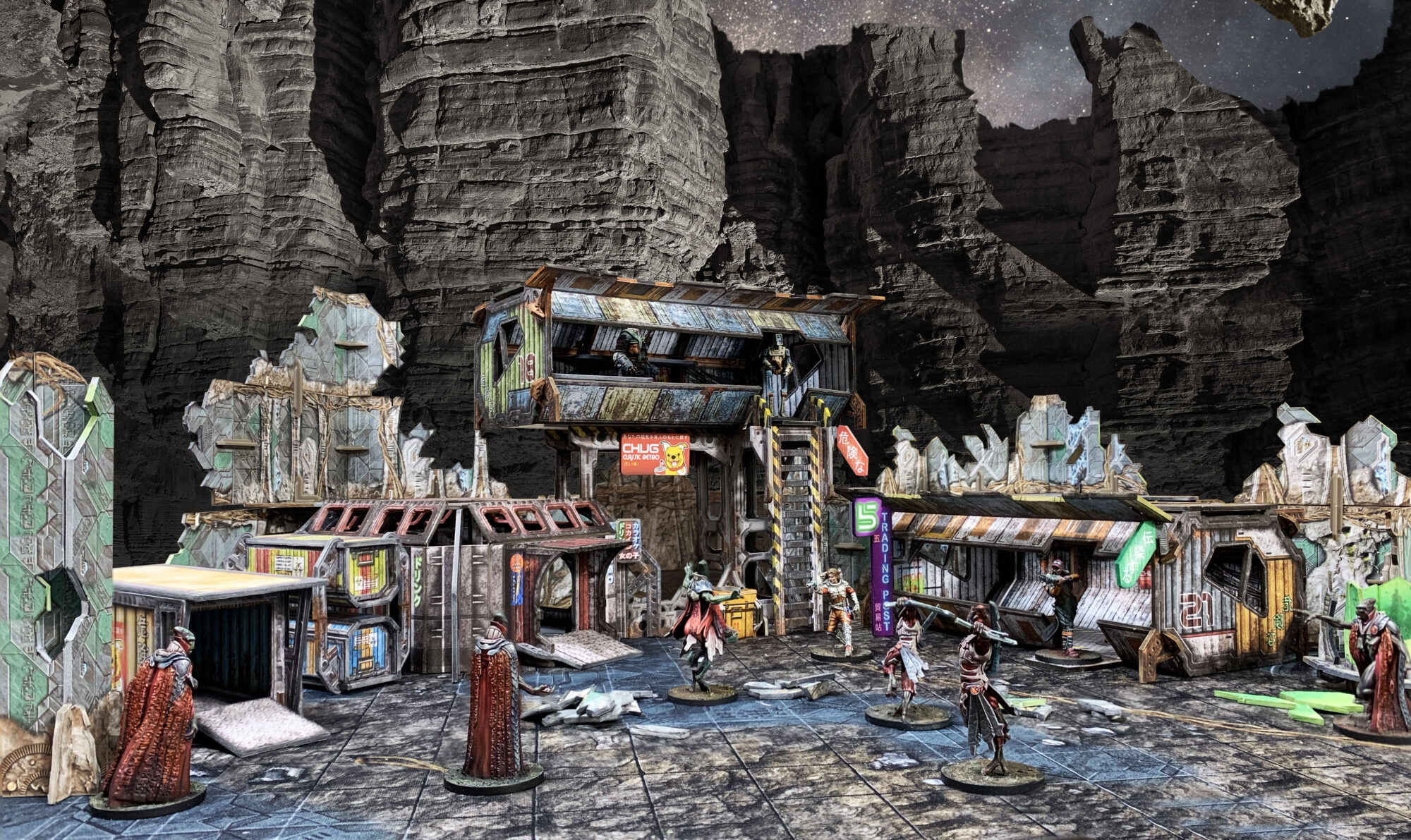 The Trading Post 5 Expansion is now available on the Core Space: First Born Kickstarter! Read on to find out a bit more about its inhabitants.

No sooner had they heard of a wealth of precious minerals and alien technology to exploit, the galaxy’s Traders, freeloaders, entrepreneurs and assorted riff-raff headed straight there! The fact that those goodies belonged to a dangerous species bent on genocide was a small and overlooked inconvenience.

The result of this mass migration is Trading Post 5, a waystation hastily established in a crater on an abandoned asteroid just beyond the Lagrange Point. Here an enterprising Captain can hire traders, mercenaries and other useful hands and stock up on fuel, machines, equipment and weapons in a eclectic bazaar of stores, workshops, bars and dens of iniquity.

The outpost attracts a colourful assortment of dubious characters and ne’er do wells; exactly the sort of tough, shifty types you’d expect in the final outpost before untold wealth or grisly death!

Doric is that rare type of Trader – a retired one. After losing both legs in a particularly gruesome encounter with the Purge and having to perform self-surgery using what was at hand – a Quell leg and a Purge Devastator leg! – he became a self-styled ‘business man’ and has opened up trading posts in various guises over the years. He is sole proprietor of Trading Post 5 and is like an avuncular rattlesnake, one moment regaling his customers with tall tales, the next dispatching miscreants with the toe of his mismatched foot. Rather than replace the legs with more suitable cybernetics he has maintained them, using a blood filter to keep the Quell leg alive and wiring the Devastator leg into his own nervous system.

Mixie is a genetic hybrid, part dog, part monkey, part who knows? Although a dumb animal Mixie is very bright and seems to understand many commands. She has a particular loyalty for Doric who rescued her from an illegal gene lab.

Doric is a new Ganger NPC and will act as a valuable contact or a ruthless enemy depending on your mission! He can be used with the existing Gangers, although he may challenge Zed for command! Mixie is the first of our Auxiliaries – small miniatures that are purchased like equipment and can help your Traders in game. More Auxiliaries to come in 2021!

Special Agent Zara has been commissioned by the Galactic Corps to be their eyes and ears on developments in the First Born system. She has posted herself at Trading Post 5, and spends her days pretending to drink at the bar but observes all. The local riff raff avoid her although they are aware she has no interest in their petty criminal activities. Doric tolerates her presence as it never hurts to have a well armed militia on hand.

Like Doric, Zara can either be a friend or an enemy depending on your Reputation! She may hire you to escort her into a First Born temple or she may hunt you down! She can also be combined with the existing Galactic Corps faction.

A strange mix of plant and animal life Qiog turned up at Trading Post 5 shortly after the Lagrange gate opened and has been there ever since. Believed to be local to the First Born system, no one knows what it wants. Although it seems to understand any language spoken to it Qiog only seems to communicate by physical intimidation. Special Agent Zara keeps a very close eye on it.

Qiog is a Civilian to add to your collection and can be hired as a Trader too. It’s probably good at something… Can a cabbage hold a gun?

Stilts was a packing droid whose only purpose was to work 24 hours a day in a large warehouse. A heavy package falling off a high shelf onto its cranium ensured that Stilts would leave that life, wandering out into the night and ending up in the local woods where it stayed for several months. A scrap merchant found it with nearly all its charge depleted and instead of returning it to the warehouse repaired and sold the machine to a passing Trader. Stilts now serves as a staff member at Trading Post 5 and is content to follow all orders, as anything is better than the warehouse.

Stilts joins Qiog as a Civilian that the Traders can interact with at the Trading Post.

Wandering Traders are those between commissions, looking for a good ship. Or any ship to be honest.

These four new Traders can be assembled as a crew in their own right, opening the First Born starter set up to PvP games. Otherwise they can be found wandering the streets of Trading Post 5 as NPCs and can be hired to join your crew.

Lohbac is a captain without a ship or crew after a recent encounter with the Purge. He is from an inhospitable world that has huge oceans and rocky islands and although he has gills he can’t actually breathe underwater, the gills are just evolutionary remnants. He can breathe the standard air in Human habitats but wears a re-breather that gives him a regular whiff of nitrogen. He also has to regularly rub unguents onto his skin to stop it from drying out. He is stronger than the average Human and enjoys the occasional bar fight.

The XLM is a heavy duty general purpose unit, designed for lifting and loading. It has a reinforced alloy, pneumatics and chassis, heavy duty motors and strengthened joints. The model came in medium and large sizes with the XLM being the largest humanoid machine for the general market. It was mostly aimed at space stations and farms where heavy lifting were required. At its height hundreds of thousands of units were produced but since the company making them went bust they have become much rarer. They are a solid machine with readily available replacement parts but are quite maintenance intensive.

XLM-26, known only as XL, has been a Trader machine for a number of years. Although it seems to be sentient it has never expressed an interest in its own freedom. However, like many machines it has expressed a distaste for shooting at living creatures. Despite this it will follow orders without question. It has a collection of small kawaii animal dolls that it keeps in a cupboard. No one knows why.

Although often mistaken for an alien Nerida is a Human mutant. The severity of her mutation is unknown to most as she covers up in public and was most likely to have been caused by her parents living near badly maintained power coils in the slum quarter of a Hive station.

She shrugs off prejudice and has carved a reputation as an able crewman who can take on any role. Excited by the idea of a new and dangerous adventure she has travelled to the First Born system to join any crew hardy enough to risk it all.

Yeti is a Kalieh, a species of small, extremely robust creatures known as much for their tall tales as their resilience. They like to embroider facts which makes them persona non gratis in polite society but extremely popular when spinning tales during drinking sessions. Usually gregarious the Kalieh are notoriously temperamental and can switch from laughing and joking to absolute fury within moments. Yeti acts as ship Tech but can double as support as he is considerably stronger than his size implies. His temperament has gotten him into some tough scrapes but his charm has gotten him out of even more. Yeti has no immediate family and is in many ways a drifter, one that happens to find the Trader life suitable for his needs.