Welcome to the Battle Systems Blog. We haven’t posted in a while but that’s going to change. Whether you’re new to us or a veteran Battle Systems fan, make sure you’re following the blog this year. And don’t worry, they won’t all be as long as this one!

2019 is an exciting year for Battle Systems, so we’re going to take this opportunity to tell you about all the awesome stuff we’re working on. Read on to find out what’s in store (literally… 😉).

Core Space is our first game, and it’s turning out to be a good one even if I do say so myself. If you haven’t heard of it, it’s a sci-fi miniatures game and was on Kickstarter back in 2017 (https://www.kickstarter.com/projects/1621774283/core-space). It can be played co-operatively or competitively and has accessible mechanics with a detailed campaign system. The game also includes a complete 3D 2 foot x 2 foot board built from our award-winning terrain. 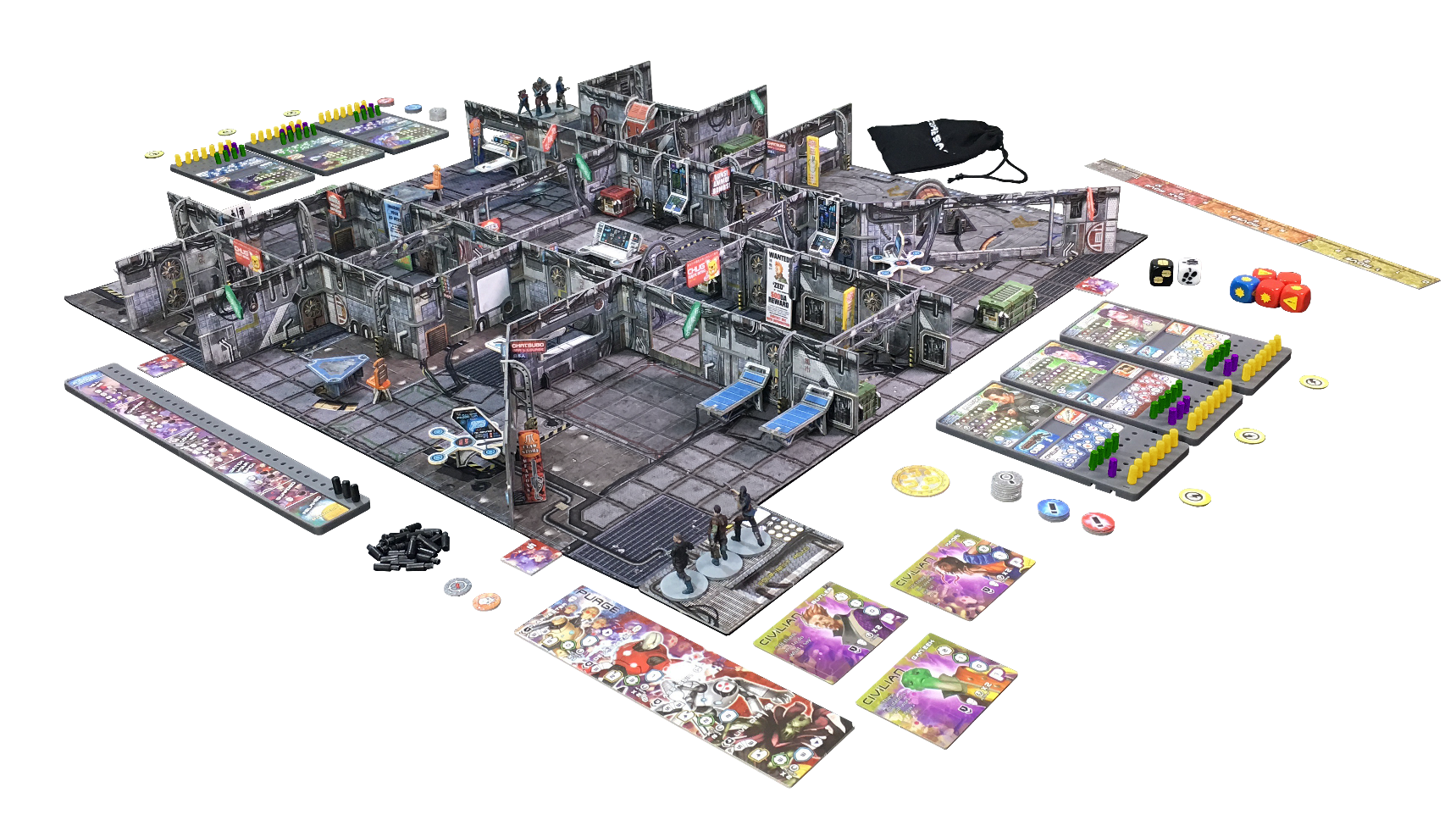 Fast-forward to now and the game is finished and on its way. The miniature and print quality is second-to-none and we’ve designed a nifty way to get it all back in the box again after the terrain is punched out. I’ll let the pictures speak thousands of words so I don’t have to: 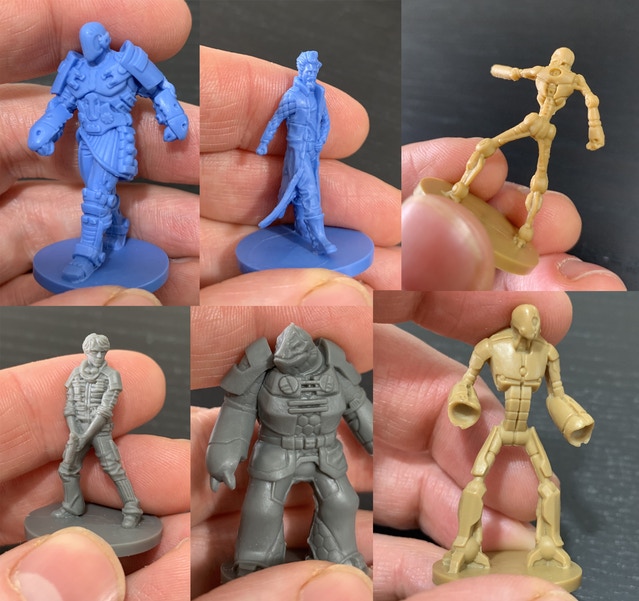 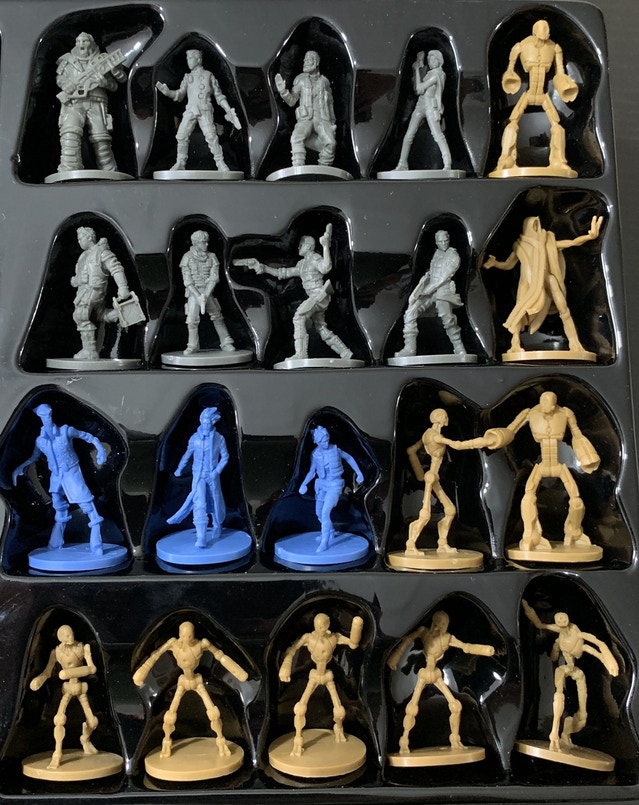 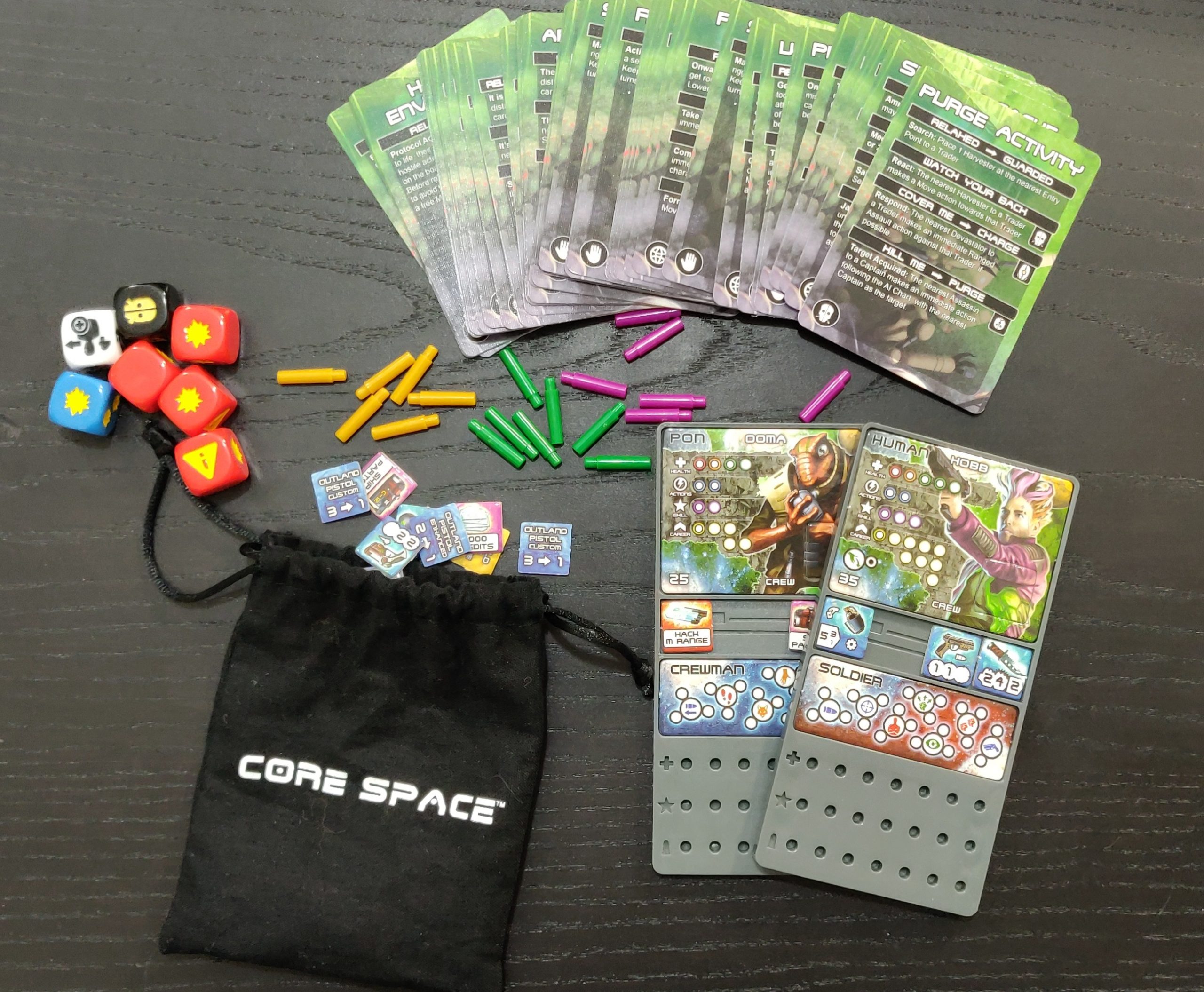 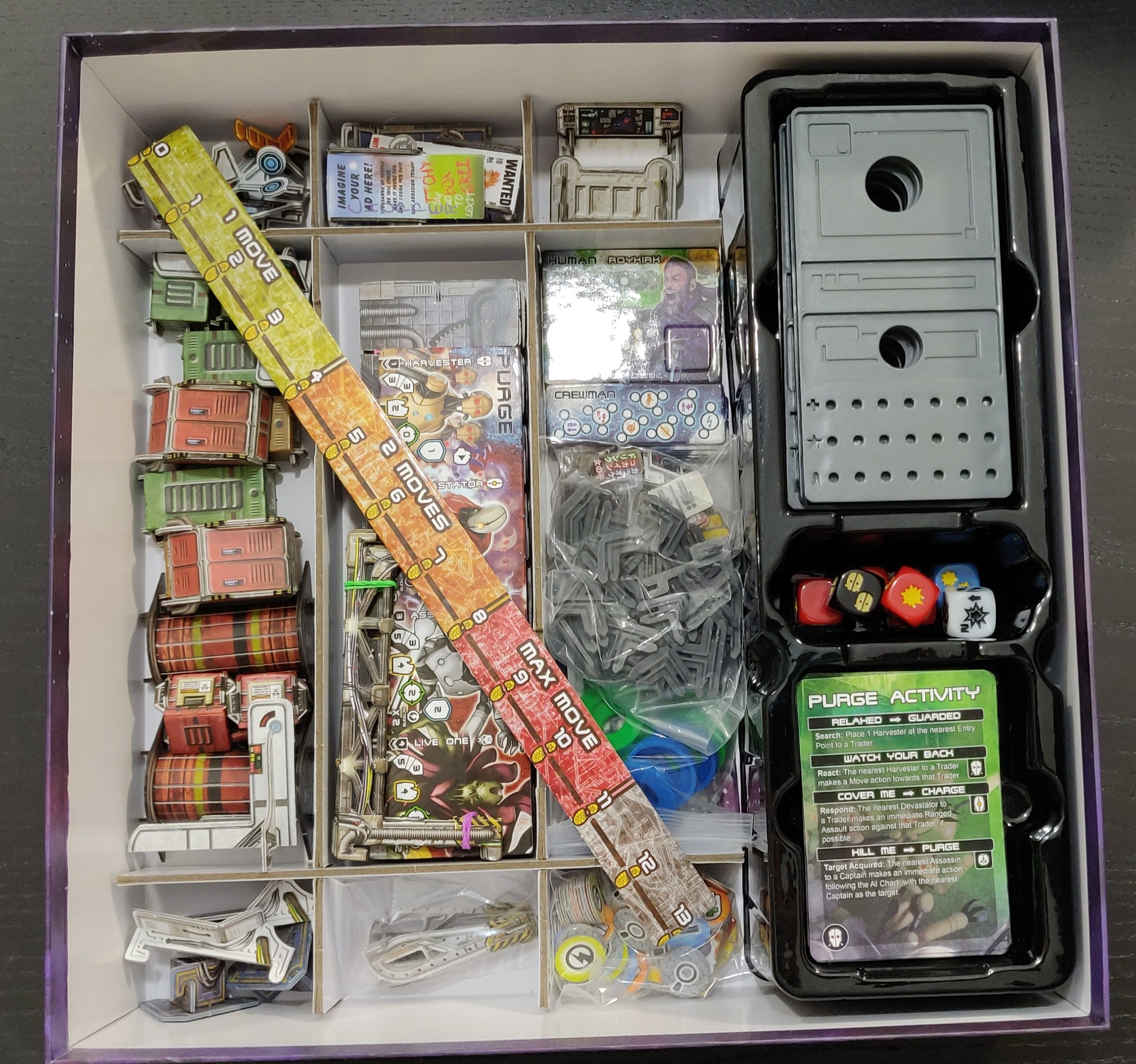 The rulebook is pretty fancy too. The retail edition of the game comes with a 104-page softback book that doesn’t short-change you on content – you’ll get the full rules, campaign system, 10 missions to play and all the reference you need to dive in quickly. 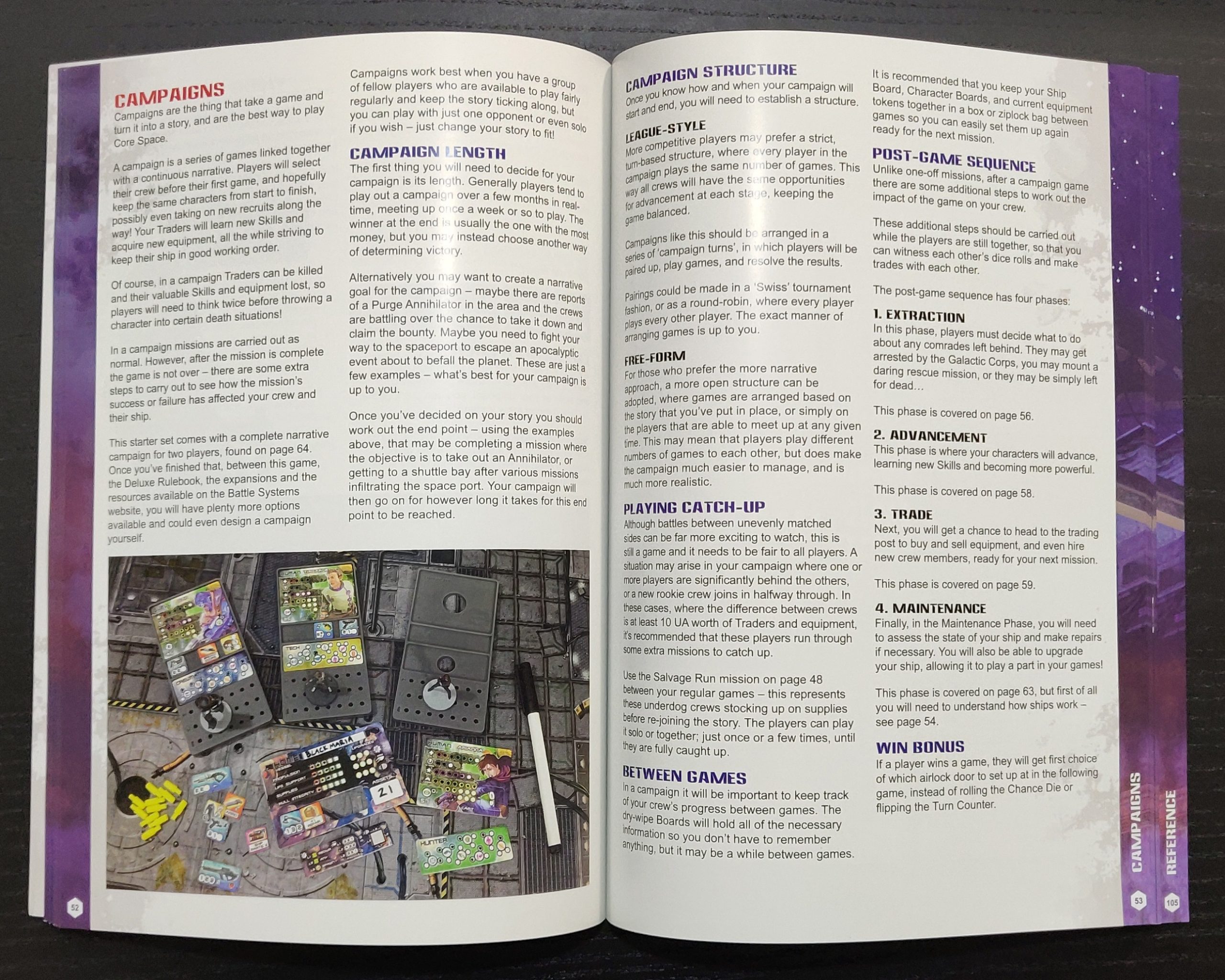 If that’s not enough you can also pick up the hardback Deluxe Rulebook with even more content. You’ll get advanced rules to customise your games, character creation, rules for lots more NPCs, and a peek behind the curtain at our early concept sketches. Kickstarter backers will get this book as standard in their pledges. 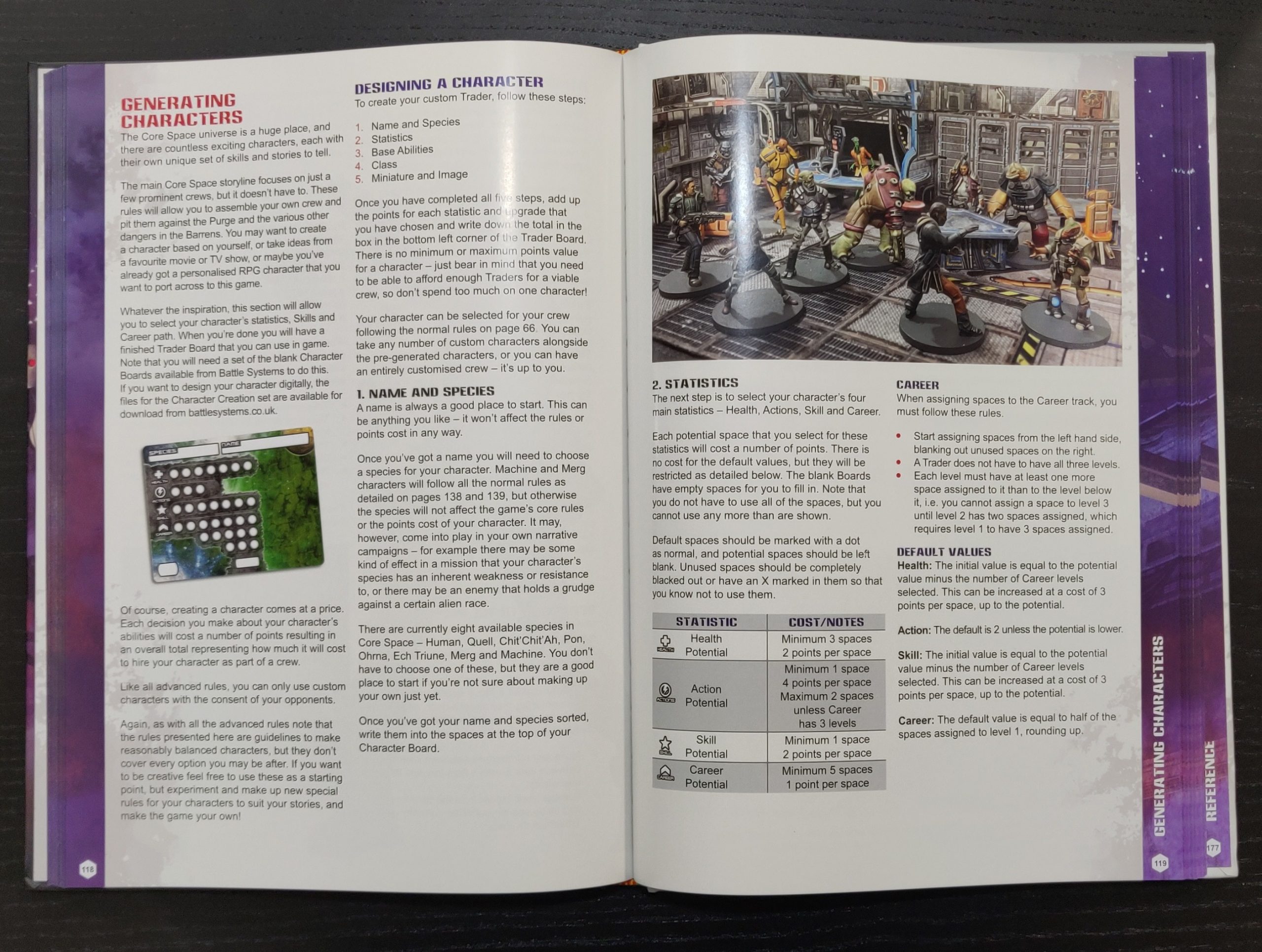 You get two complete trader crews in the core game, but we’ve got a total of six available that can all be mixed and matched together. 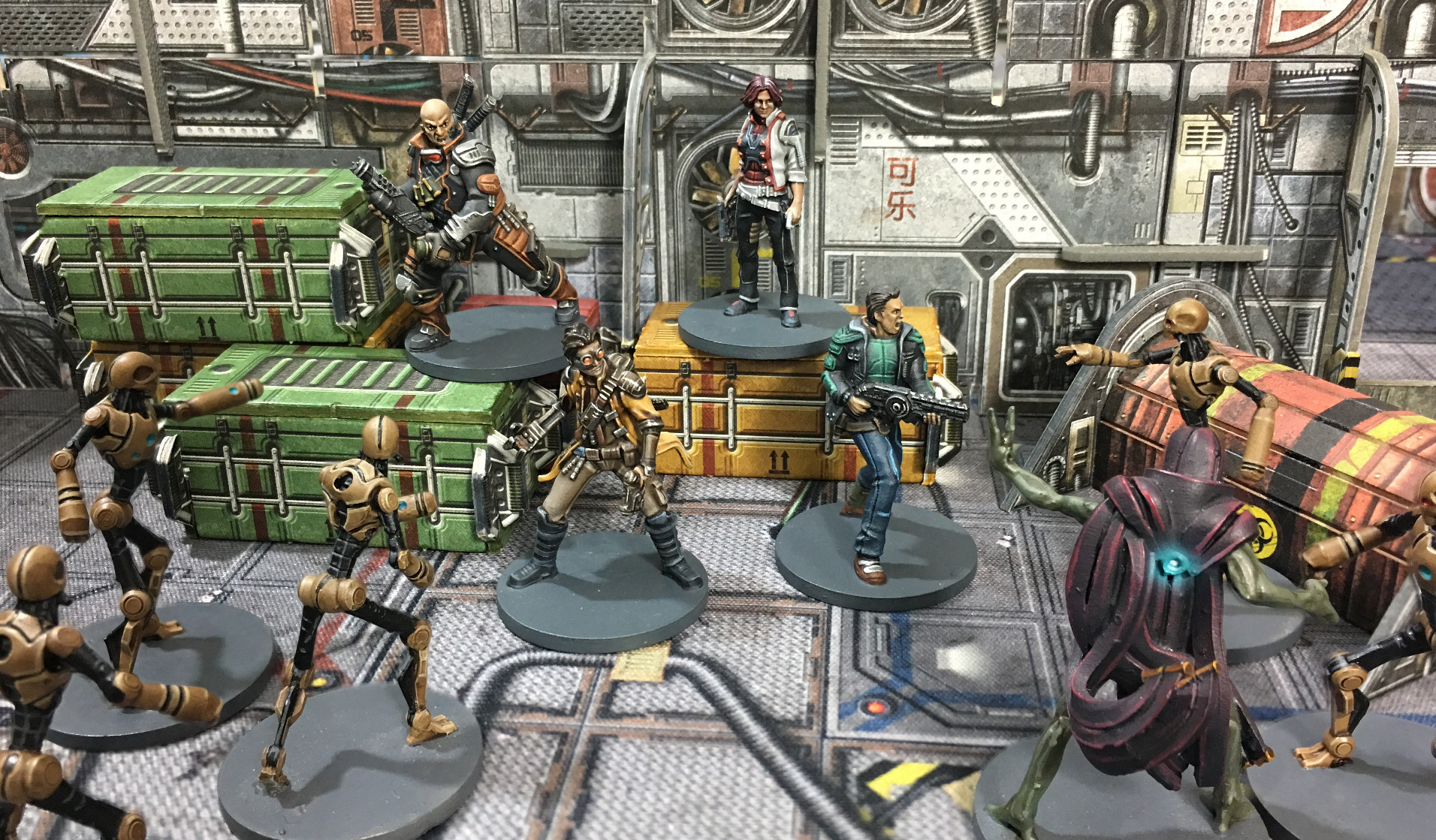 All of this is available to pre-order now to be released at the end of March. You can order direct from us HERE. Alternatively, as of this year you can now head down to your FLGS and see us there too. That leads me nicely into my next topic.

We’ve been selling high-quality gaming terrain since 2013, but we’ve only ever sold it direct to our customers. What we’ve been missing out on is the immense value that local gaming stores bring to the community. With the launch of Core Space Battle Systems will start arriving in retail stores all around the world, so more people than ever will have a chance to see it in the flesh. Been meaning to pick up one of our add-on products but wanted to avoid international postage rates? Been thinking about our terrain but wanted to see it first-hand? Now you can!

We’ve been in touch with lots of stores already but we certainly haven’t gotten around to all of them yet. If you want your local store to stock our products, please ask them to get in touch with us at stewart@battlesystems.co.uk, and we’ll take it from there 😊.

Of course, just being in stores is only part of the story – we want to build thriving in-store communities of Core Space players, and of all the other games played on our terrain. As such, we want to work with retailers on campaigns, events, displays, demos and prize support. Here’s an event we ran recently at Board in Brum in the midlands: 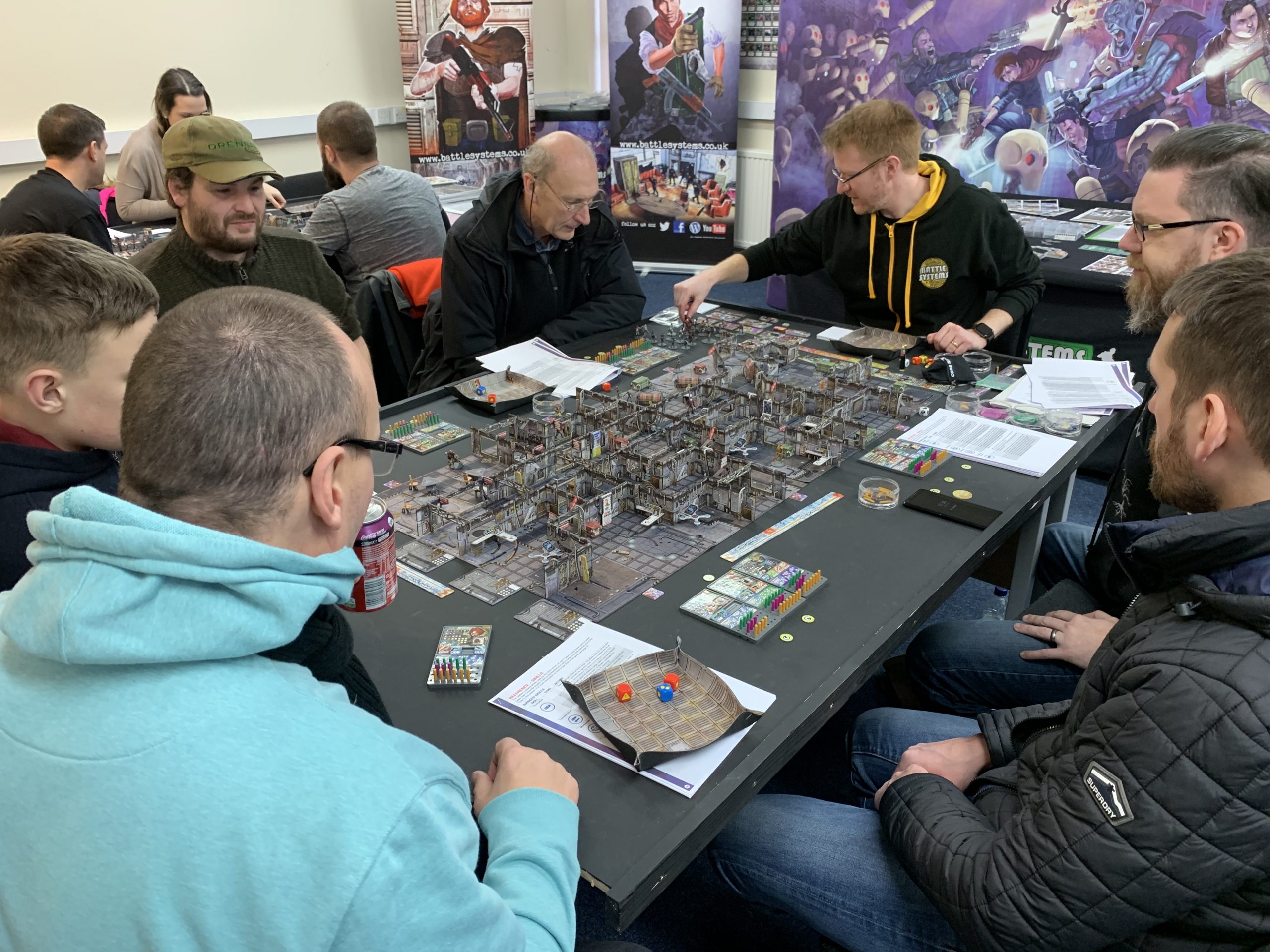 If you want help with an event, get in touch and we’ll see what we can do.

With the retail launch we are repackaging our terrain to give it extra on-shelf impact, and to make sure we’ve included the barcodes, small print, and other technical paraphernalia that stores need. The terrain itself won’t change, it’s just in a shiny new box 😊. Here’s what the Galactic set will look like going forward: 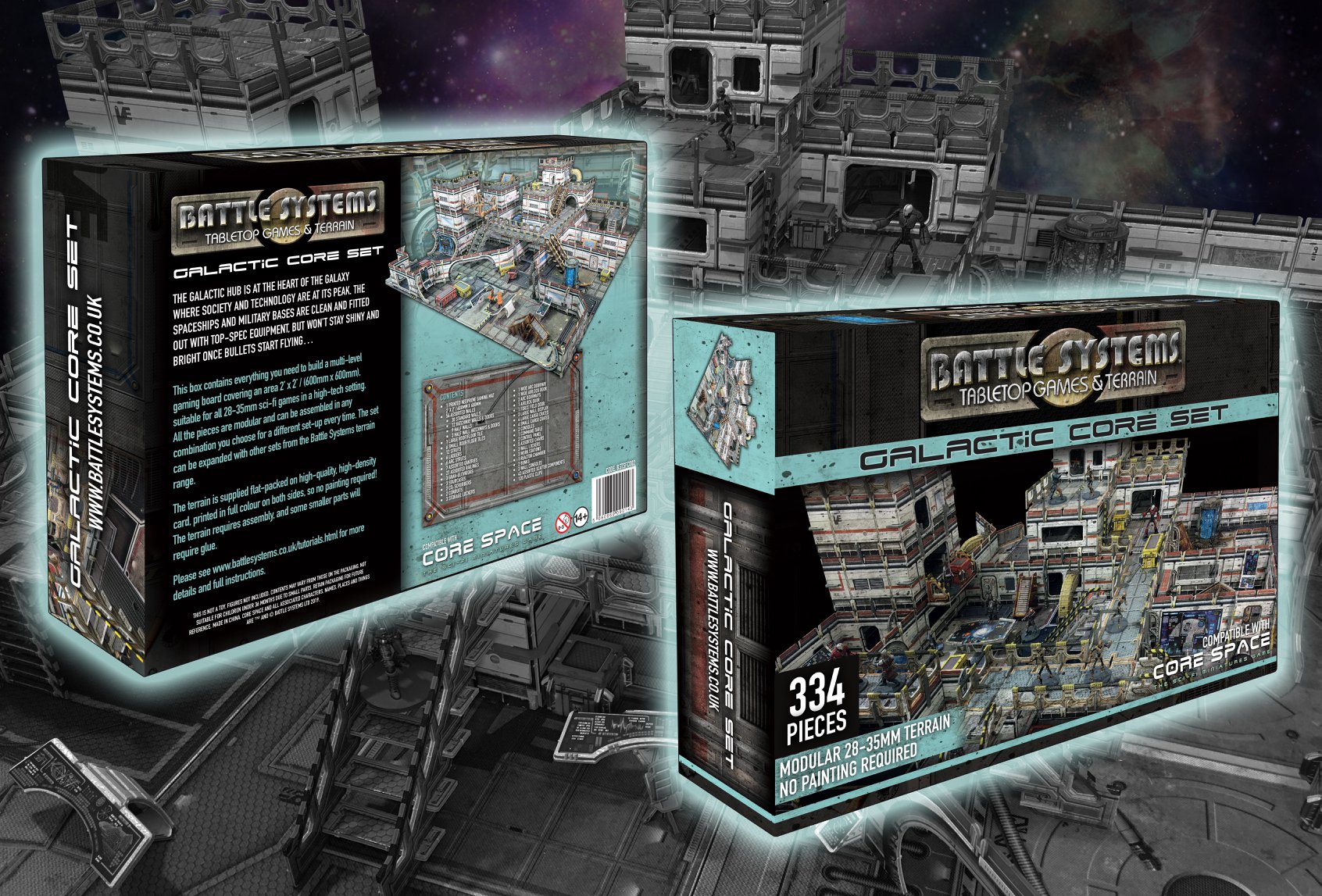 We are also reworking our contents photos to make it clearer exactly what you get in each set. I think this looks pretty cool: 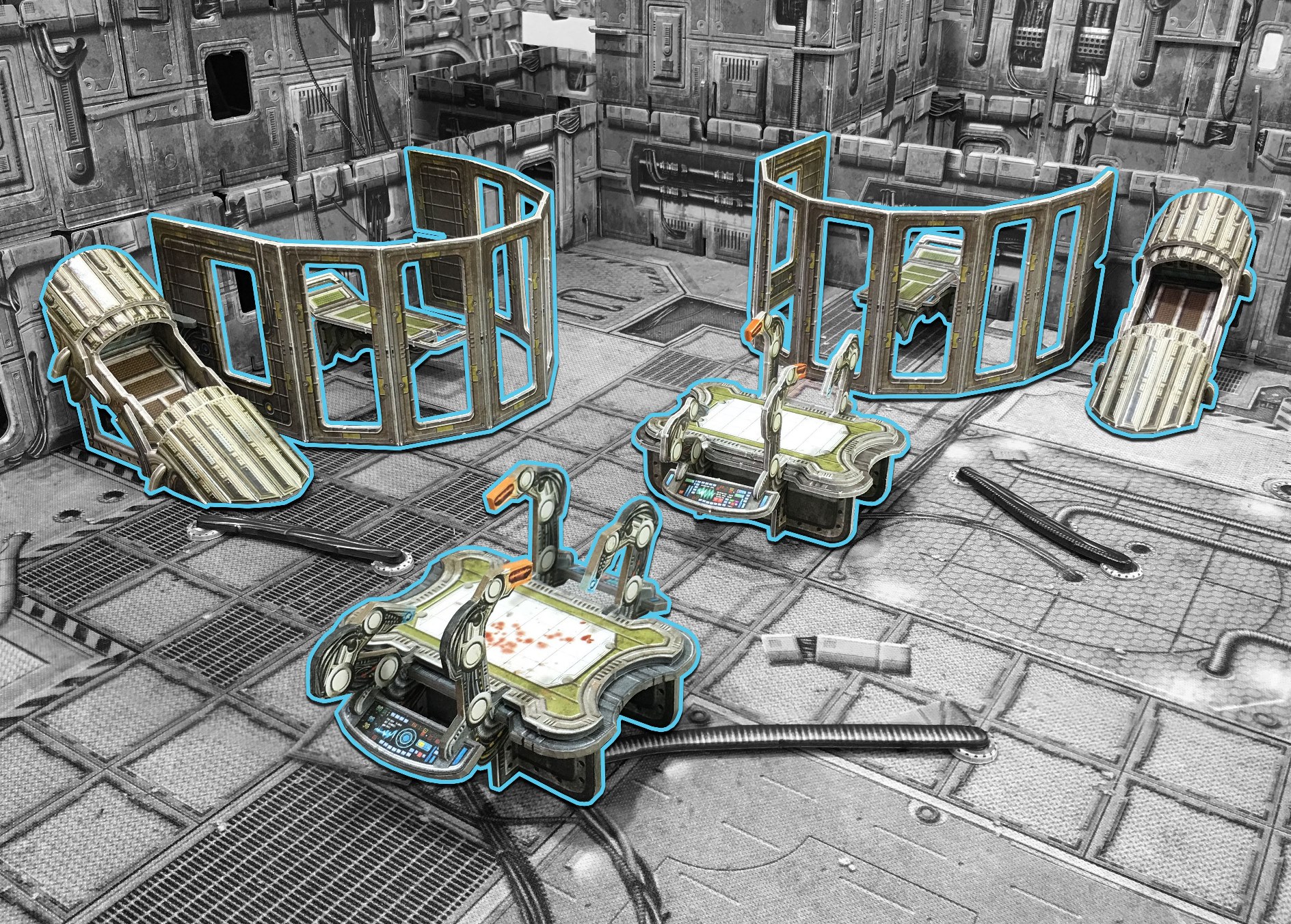 The one part of our products that will change is the plastic clips. While they fulfilled their role admirably, the old clips are a bit fiddly to punch out of the sheets and we wanted to add some extra stability for larger terrain projects. So, Core Space and all newly packaged terrain going forward will ship with our new improved clips. These have been moulded in ABS with a new 3D profile that will make them stronger and more durable. They are fully compatible with the old clips so nobody needs to replace anything. Of course, if you’re working on a particularly ambitious project and you wanted to pick some up, the new manufacturing method has also allowed us to drop the price! The new clips will be available separately a little later in the year, in a pack of 80 clips for just £6.99. 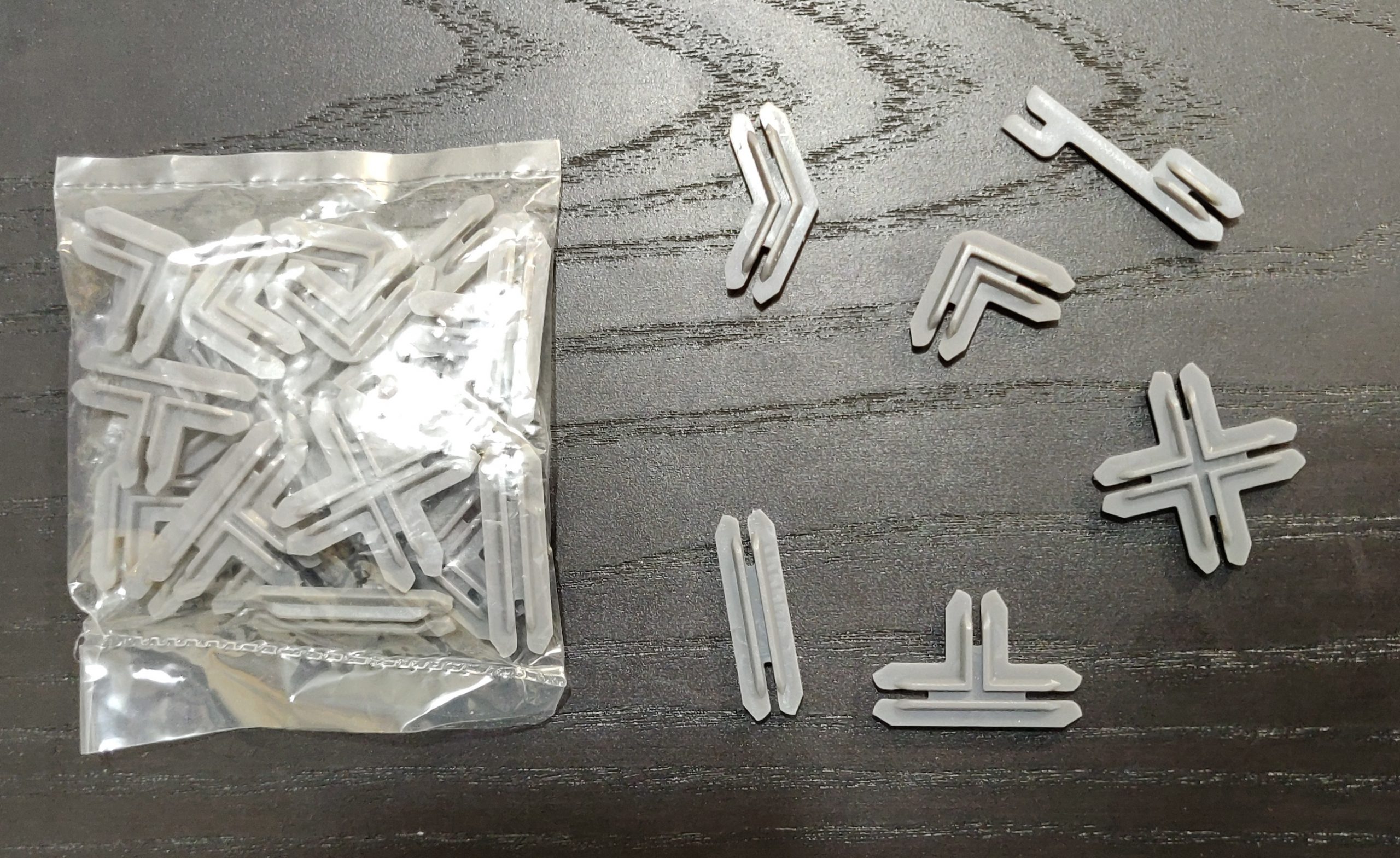 So that’s where things stand for our existing ranges, but after a few years and many, many games we’ve taken in a lot of feedback about what people want to see next. If you’re running out of ideas for how to configure your Frontier settlement or Shanty Town, then we’ve got exciting news for you! As each of our ranges hits retail stores this year, they will be complemented by some brand new sets. These new sets were not funded by Kickstarter and can take your games in a brand-new direction. These are very much work in progress but here are a couple of previews:

We’ve got some cool ideas for those with our urban apocalypse sets too. Let’s just say we’re hoping to take advice from Robin Sparkles…

Beyond that, we want to step outside and scale up to fill some larger tables. We’ve got the skirmish game world fairly well covered already, but what about all the wargamers out there? It’s totally possible as seen with our Outlands January sale deal, but we want more.

I won’t say too much just yet, but if you’re after some new wargames terrain, whether sci-fi, fantasy or historical, subscribe to this blog and all will be revealed. 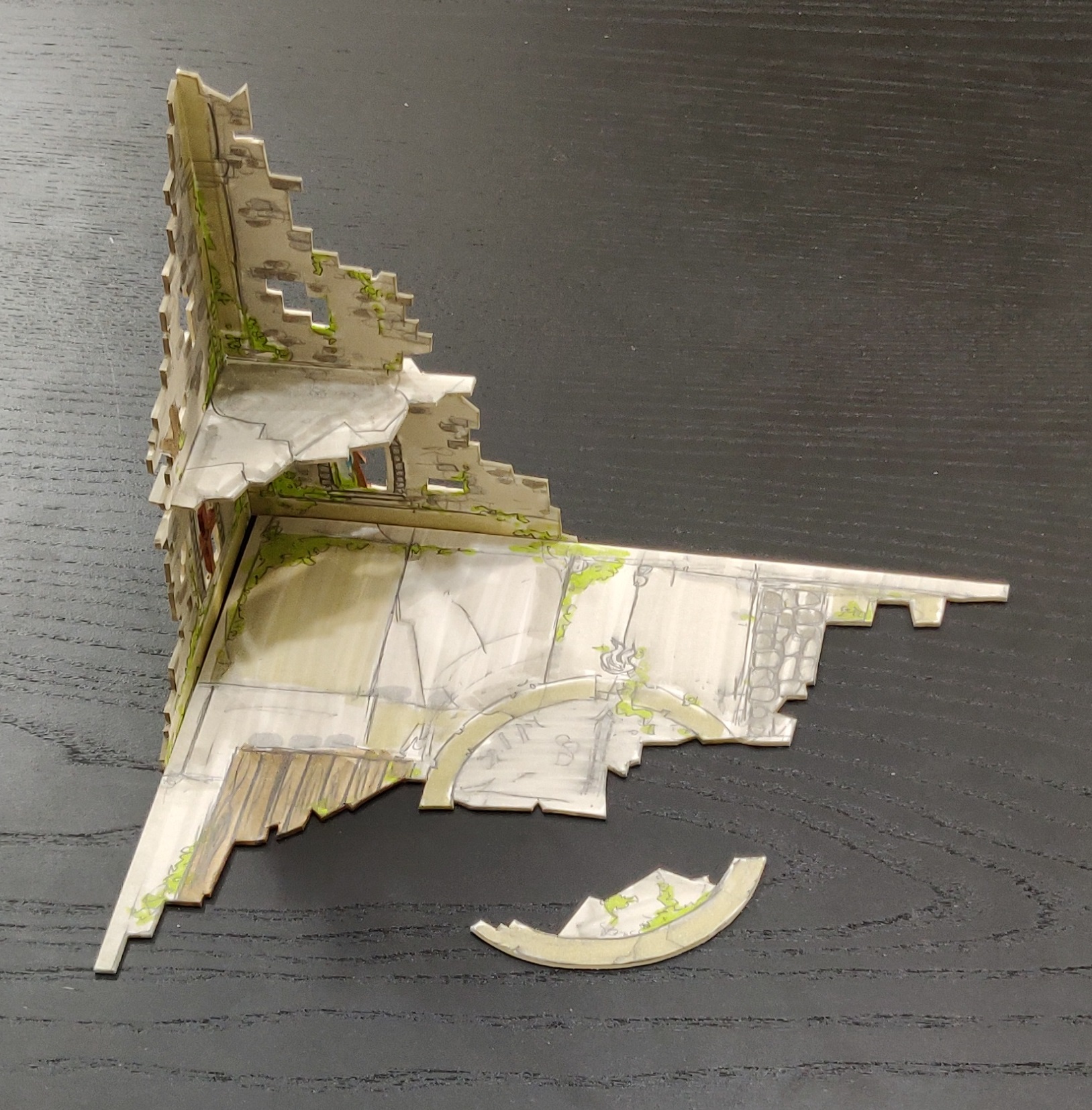 So, with all of this going on, you’re going to want to keep up to date with it all, and chat about it with your fellow gamers. With that in mind we’re going to be sharing information in a few ways this year. 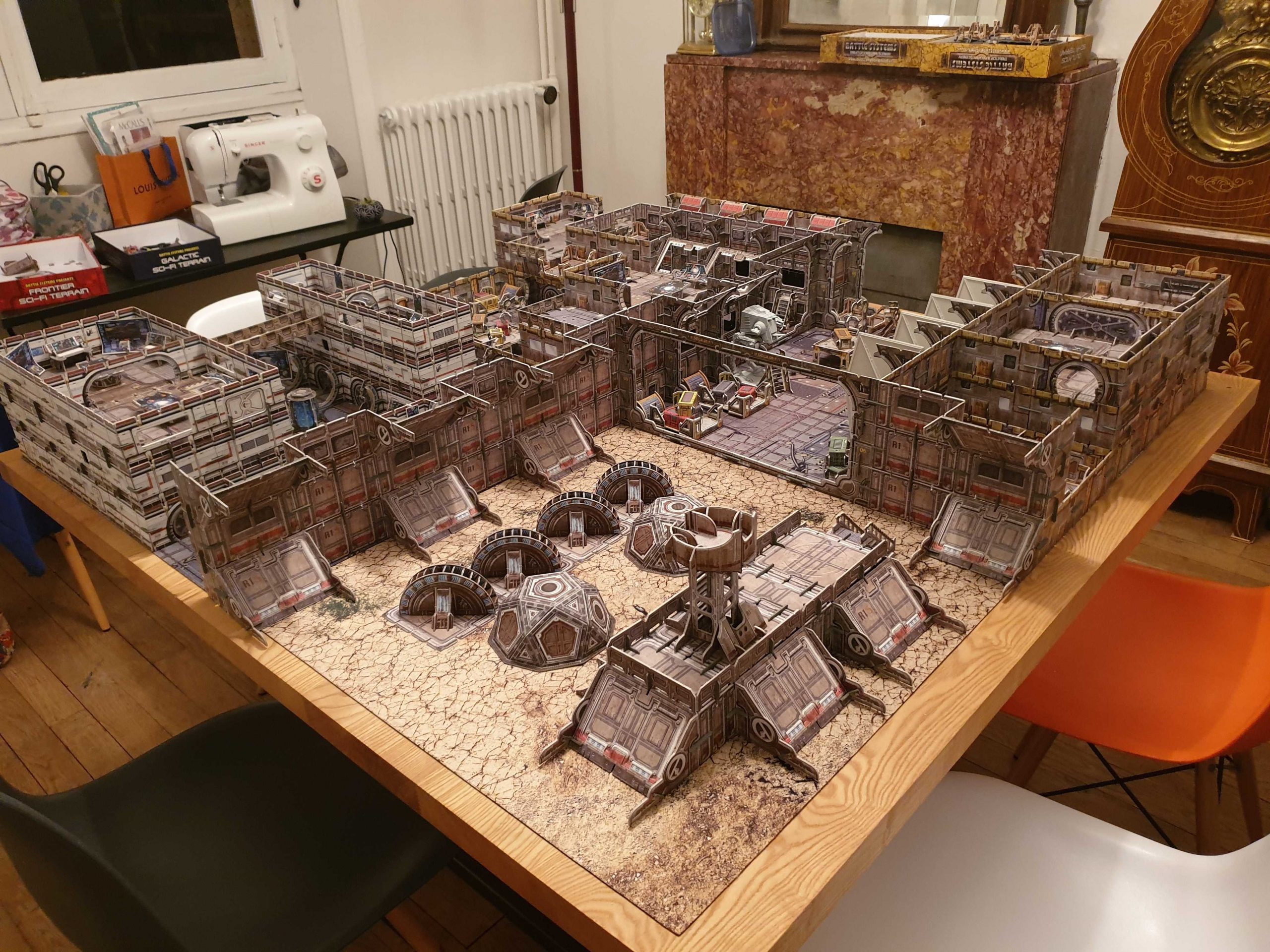 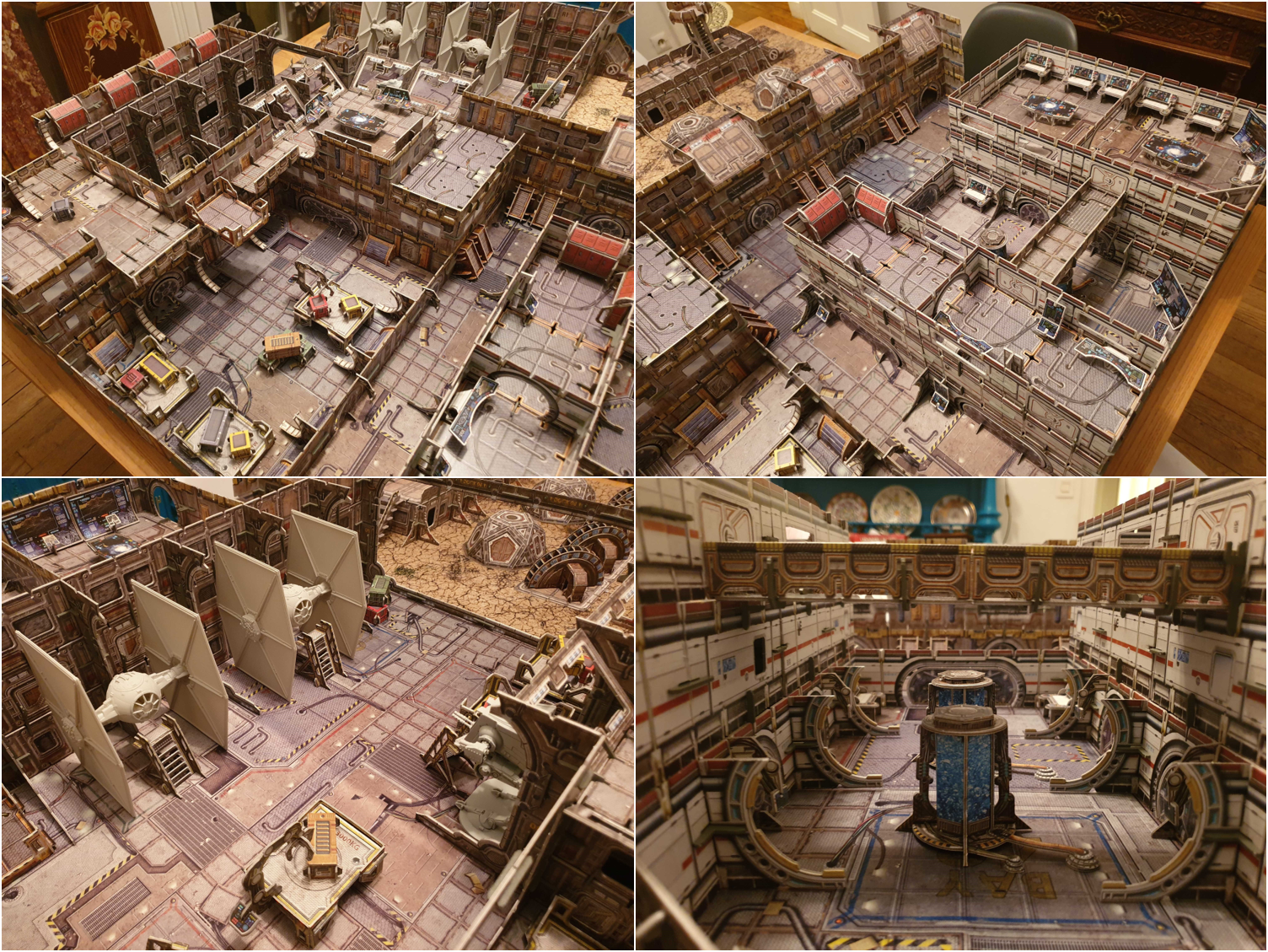 What? That’s not enough? Oh alright then, I’ll spill a few more beans about the future.

You may have noticed that parts of our Fantasy Dungeon range are running out of stock. It’s now been nearly five years since we ran the Kickstarter for our Dungeon, and since then we’ve used our experience to make improvements to our engineering and our artwork. With the current print run nearly sold out, we’re looking at revitalising the Dungeon and bringing it in line with our newer sets. There’s a long way to go yet and plenty to do in the meantime, but we’ll update you on our progress later in the year.

In the meantime, our remaining stock of Dungeon add-ons is available at 20% off, so if you’ve been meaning to pick something up, now’s your chance. While stocks last.

In between the constant work on our own new products, we are also working on a few more collaborations with other companies. Watch this space for more info.

Signing Off, for Now

Right, I’m sure you’ve had enough of my rambling. The next one won’t be an essay, I promise!

Let us know your thoughts about Battle Systems’ future, or tell us what you want to see, in the comments below. We’re excited to hear what you think!