Battle Systems has been making gaming terrain for many years now, so when we finally got around to doing a game it would have been silly not to use it! 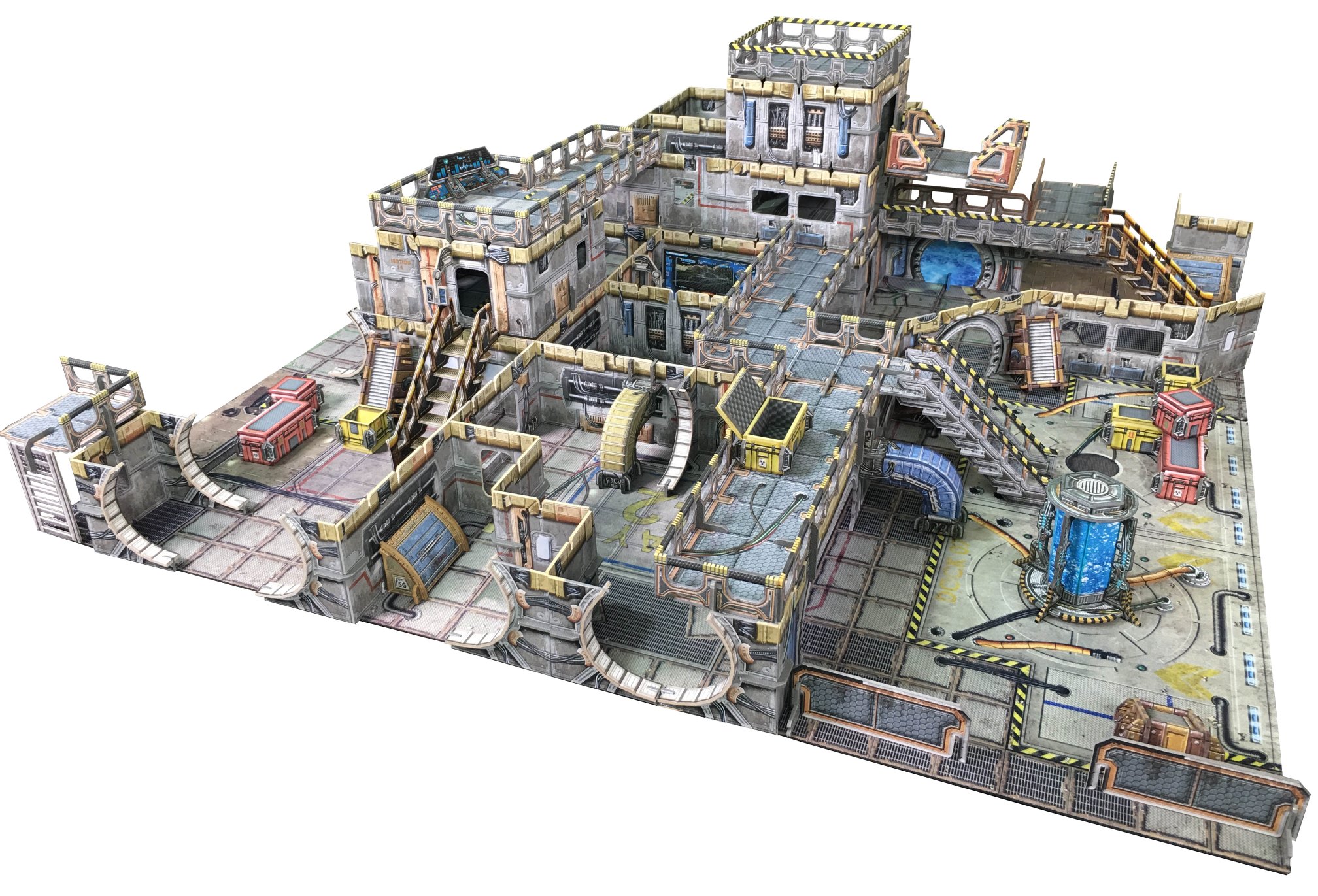 Core Space comes with the single-level, dungeon-crawler-style Cyberpunk Terrain, allowing us to keep the mechanics of the core game simple and focus on the narrative and the campaign. Many of our other terrain sets however have multiple levels and a far wider variety of scatter terrain, perfect to scratch that skirmish gaming itch. But how do you get around the board?

Those with the Deluxe Rulebook will know that there is an extensive section on Advanced Rules. These rules are absolutely not necessary to enjoy everything the core game has to offer, but if you’ve mastered the basic set-up and want to take your games to the next level 😉 you can add as few or as many of these rules in as you wish. 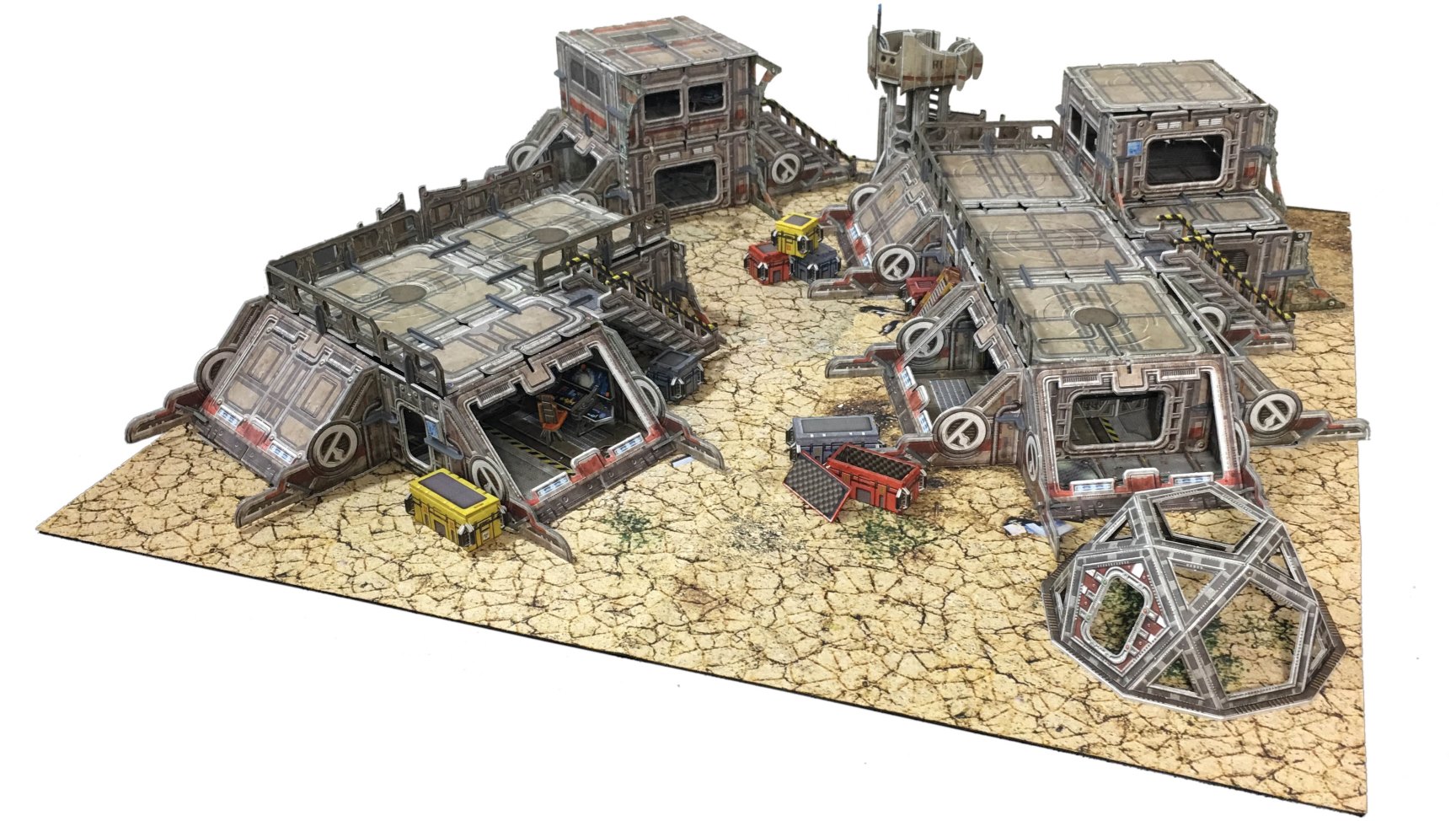 This section of the book includes rules for climbing, jumping, falling, and even diving through windows! Stairs can be climbed as part of normal movement, whereas ladders take longer to scale and require Traders to use their valuable actions. Other scenery (such as tables and crates) can also be climbed on to gain a better vantage point.

Jumping, either down from a higher level or across a gap between platforms, is done with a simple dice roll modified by the character’s ability. Succeed and you can carry on with your turn, but fail and you will fall and potentially take damage!

Most characters won’t have more than 1s and 2s for this ability, but you may notice that the Purge have values as high as 5! In real terms this means that multi-level boards are far less restrictive to the Purge than they are to your Traders – while you are climbing down ladders and dodging obstacles, they are vaulting railings and leaping from floor to floor without slowing down. This relentless pursuit makes them all the more scary! 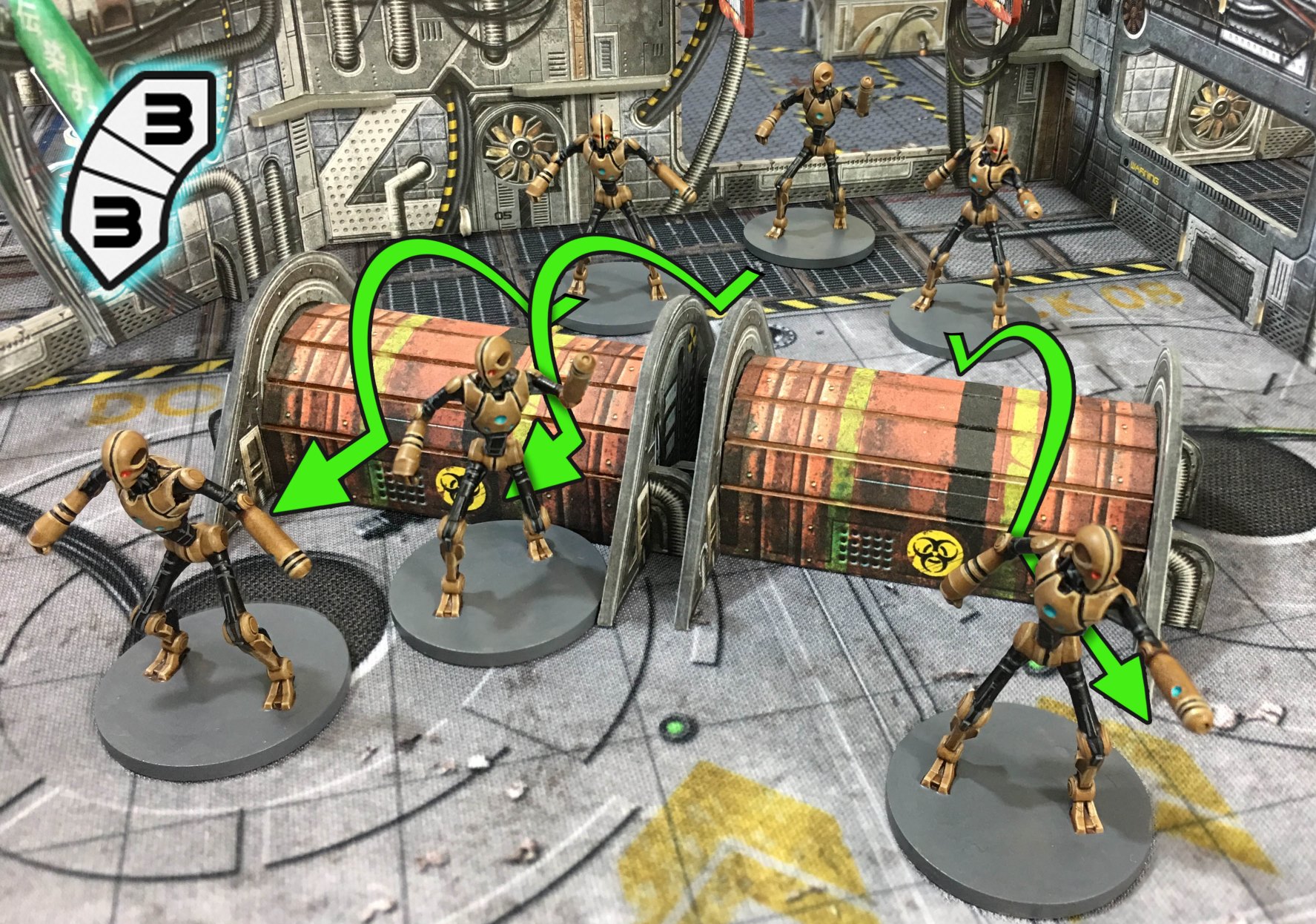 Multi-level terrain is more than just going up or down though. All the different floors and ceilings and struts and angles will provide far denser cover to keep you safe from flying bullets. You’ll also have more avenues of escape – you can now go over or under your enemy as well as just going around them.

The Core Space rules are intentionally left open for more of an RPG feel, and this means that you can also assign extra rules to your games to suit the terrain that you’re using. One example given in the book is the use of elevators. Our Frontier and Galactic sets come with grav-lift platforms as well as special clips that allow you to attach the platform to different floors. Traders can use actions to call or operate the lift – it will often be quicker than climbing and safer than jumping! That’s just one example though – you can do whatever you want to suit your collection. 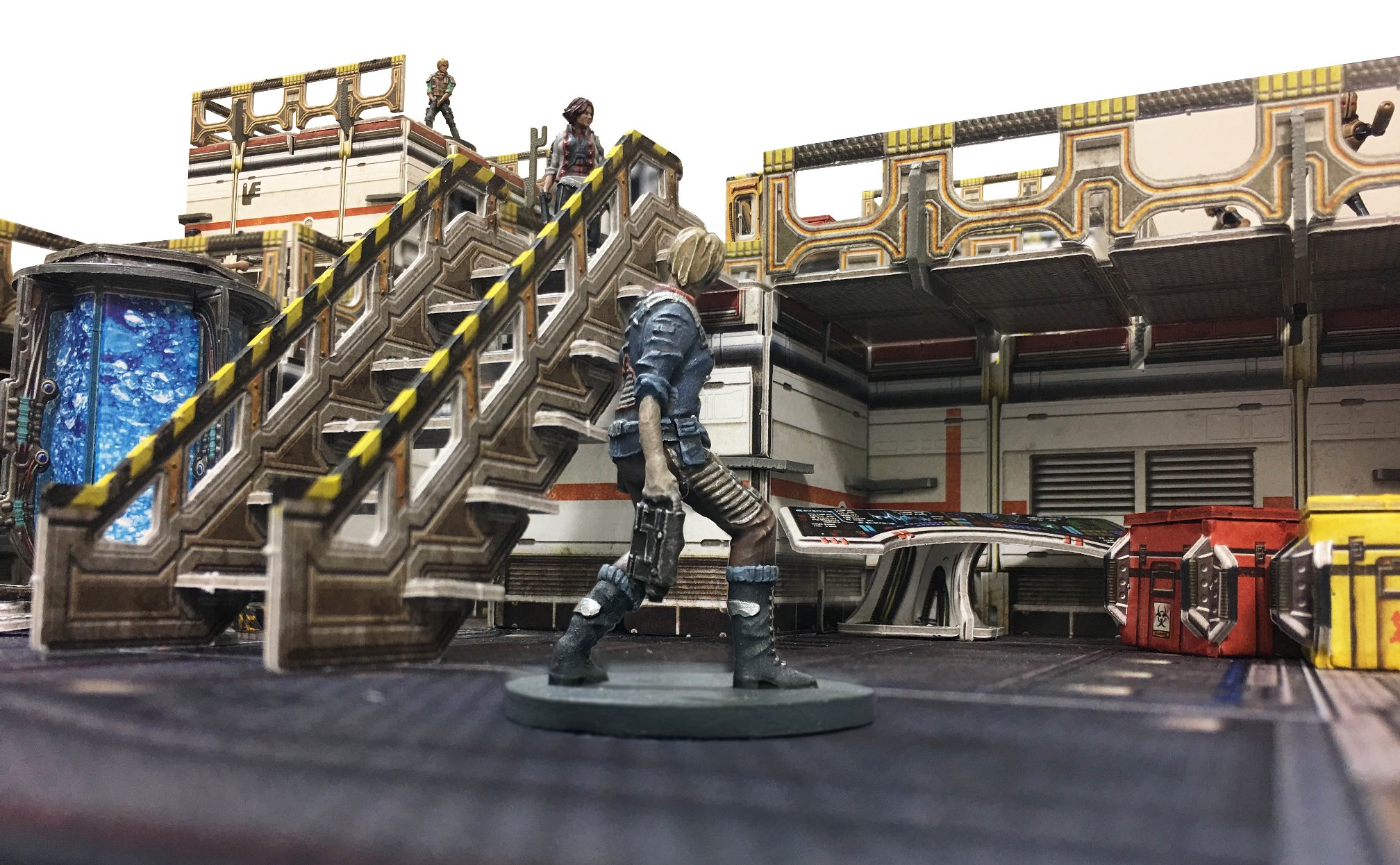 Line of sight can be trickier to deal with on a multi level board!

Elevator clips are one of many things you’ll find in our terrain sets to help with gaming on multiple levels. All of our upper floors are designed so that they do not clip onto the lower ones (unless you want them to of course). Instead, the plastic clips slot into grooves in the walls below so that each floor can be lifted off, allowing access to the one below. Just don’t forget where your models are!

The sets also come with plenty of stairs and ladders. The stairs are designed so that your miniatures’ bases can be placed on the steps, avoiding any awkward issues if characters end their turn halfway up the stairs. Ladders can be used in tighter spaces – you may just need to decide that certain floor tiles can be used as hatches if there is no more obvious access. 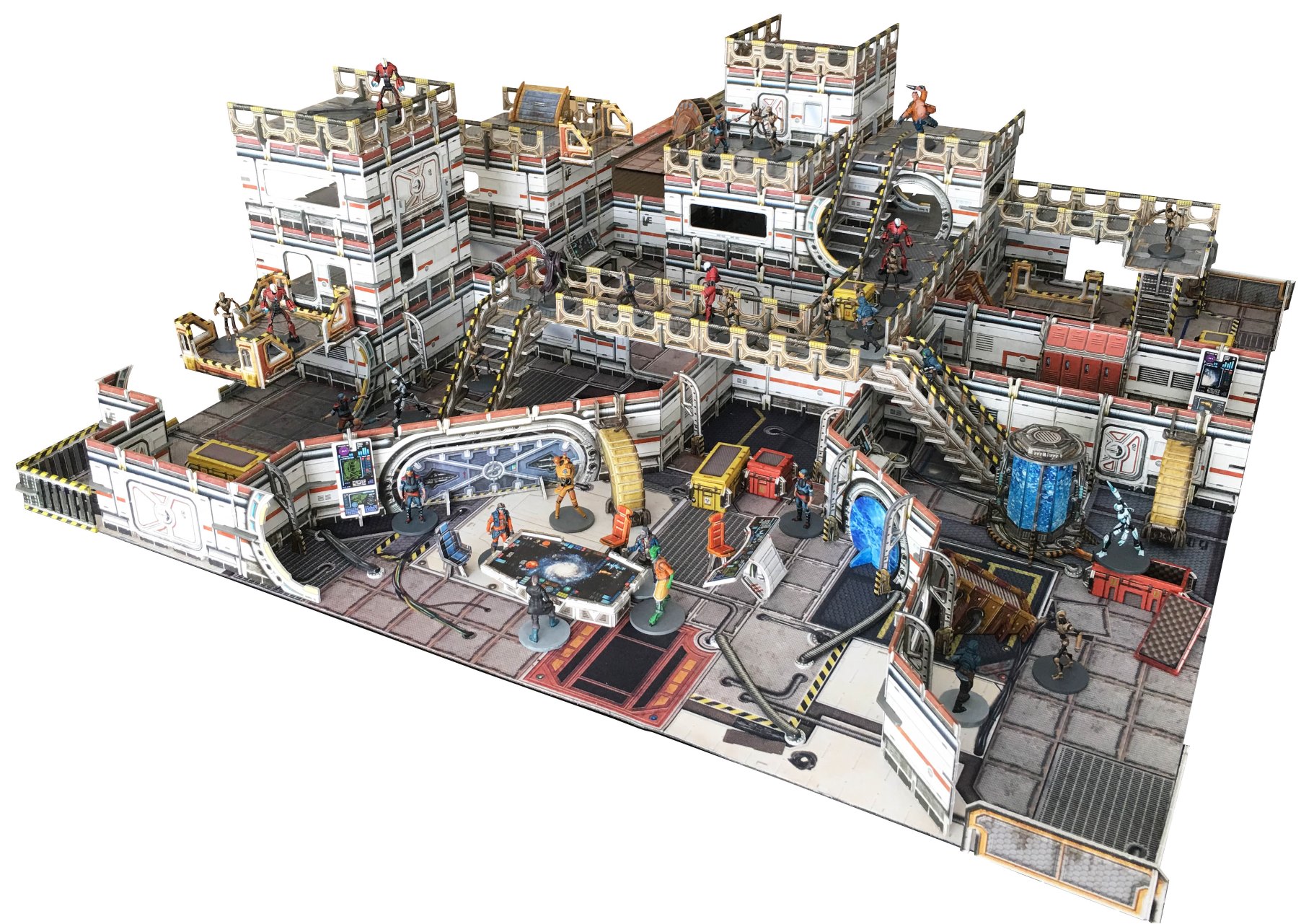 You may think it’s intimidating to build a large multi-level terrain set for each specific mission, but don’t worry. Core Space is flexible enough that you can build the terrain however you like and adapt the mission to that. As long as you keep any objectives equidistant from each player, and make sure the Traders have enough time to reach them before the hostility gets too high, the game will work just fine.

You can even take the existing missions from the Starter Set or from the Mission Monday archives and put them on a multi-level board. Maybe drop the hostility a little so you’ve got more time to explore, but otherwise just build your map, and then build another map on top of it! 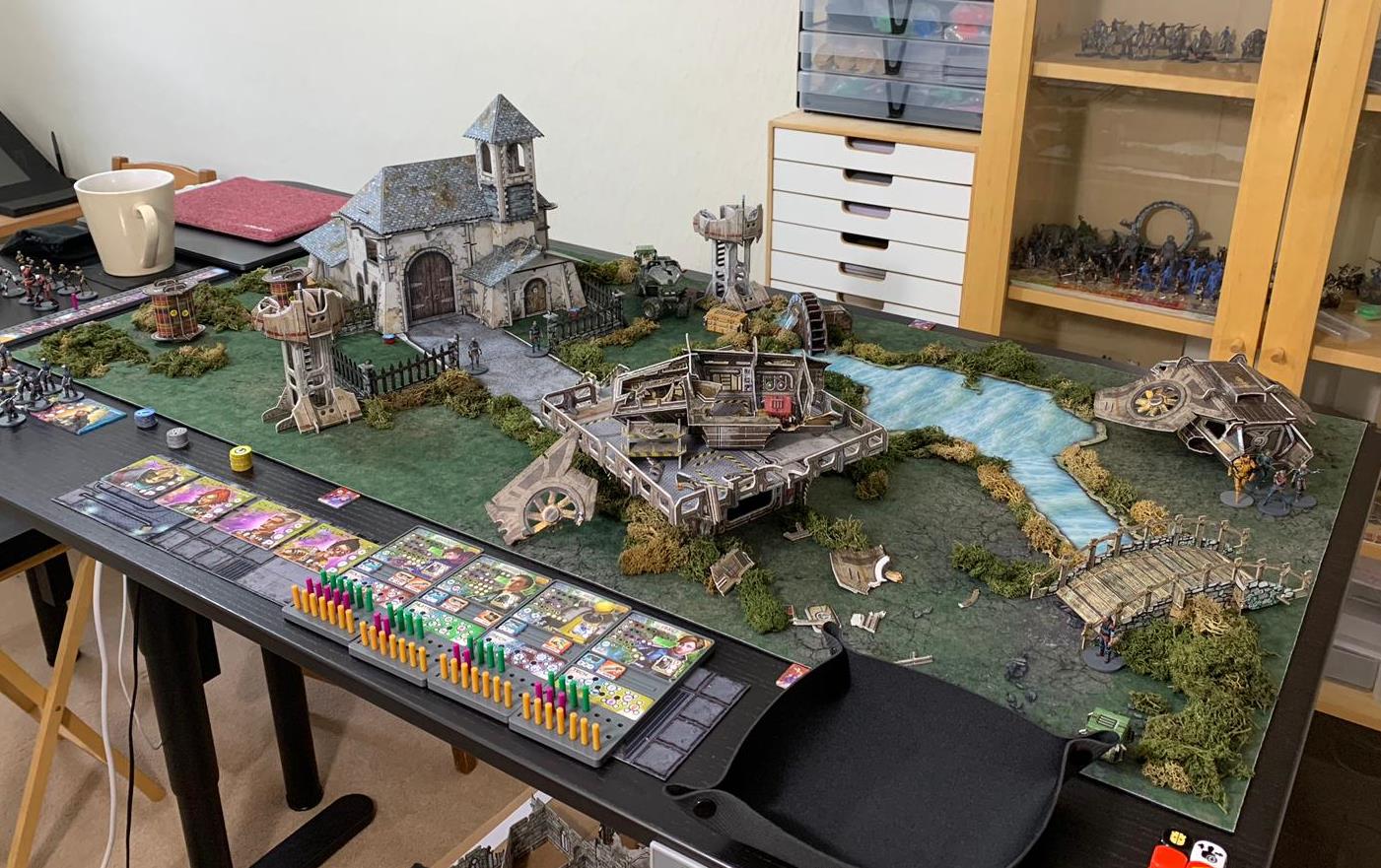 You don’t have to be restricted to sci-fi terrain. For this mission Colin took inspiration from our new fantasy terrain and added some sci-fi elements for a mission where his crew had to head down to a planet and break into a private residence.

Add any comments and questions below.